I feel like I am being a bit disloyal to the Psy/Changeling series by admitting that right now I am enjoying the Angel series more but it’s true.   Even though we only get one book a year in this series (or maybe because we only get one book a year), I always wait impatiently for the next installment. There are a couple things I like about this series. 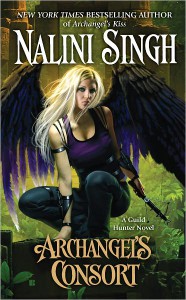 The worldbuilding is so intriguing.   For those unfamiliar with this series, the world is comprised of angels, vampires and humans.   There may be other stray beings around but those are the primary genetic beings.   Angels are at the top of the hierarchy and they make the vampires, both willingly and unwillingly.   Not every person is suited to be an immortal vampire and those that are psychologically incapable are rejected.   This can lead to human pairings that result in one member being made a vampire and another not. Of course, there are other vampires that are made indiscriminately.

The angels are ruled by a number of Archangels, beings old and powerful.   This conclave is known as the Cadre of Ten and they rule by geographic region.   It is the only way that they can come to a peaceable resolution, knowing that if they did not have their own territory to rule, they would be in constant combat.   Angels are born but births are rare.   Raphael, the male protagonist of this series and ruler of North America, is the only progeny of two archangels.   These angels, as many do, slowly went mad as they became older.   His father killed many people.   His mother actually intentionally dropped Raphael from a great height resulting in every bone of his body breaking. Raphael knows is that his mother is powerful, dangerous, and very likely insane.   She is in a deep sleep and has been for centuries but recent events seem to indicate that she may be awakening. The purpose of her awakening is unclear as is her sanity and the threat she poses to Raphael and, more importantly, to his love, Elena.

Having read three Angel books from you, I can safely say that old angels are scary, dangerous angels.   And this is where your attention to detail and plotting make such a difference.   (And for those who haven’t read the first two books, you may want to look away as this is kind of spoilerish for the first two).   The series is centered around Elena Deveraux, a former member of the Guild who police the vampires, either on their own but primarily at the request of the the vampires’ makers.   Elena was particularly good at this because she is like a scent hound, able to pick up the scent of a vampire and track him via the scent.   When Elena becomes near death as a result of attempting to carry out a task forced upon her by Raphael in book 1, Angel’s Blood, Raphael’s body unexpectedly produces ambrosia which transforms   Elena from human to angel.   But making Elena has created weakness in Raphael.   The two are tied somehow and while Raphael’s power has strengthened Elena, her humanity has weakened Raphael. He takes longer to heal.   He is more easily affected by attacks from others.   Yet, her humanity might be the very thing that will keep Raphael from the path his father and possibly his mother has taken.

Archangel’s Consort opens with Elena still learning to be an angel, still weak.   Her affinity as a tracker, however, hasn’t changed and she’s called in to investigate a killing of a child at a local private school, a school that her half sisters attend.   As more vampires appear to go rogue and Raphael’s holding over Manhattan is challenged, Elena learns more about her family, an affinity that her step sister and she may share, and secrets her father has hidden deep.

If there is a theme to the book, it appears to be one about parents and their complicated love and jealousy for their children.   Jeffrey, Elena’s despised father, had at one time shown genuine caring for her.   Caliane, Raphael’s mother, tries to kill Raphael but does she do it out of love or jealousy? And for Elena and Raphael, they have to deal with what they are in relation to who their parents are. How much are the children the product of the parent or do they, as Raphael says at one point, make themselves.

As Elena grows as an angel, she has to learn some painful lessons.   Her Guild is no longer her family. She has information, secret information regarding angels and vampires that she cannot share with them.   She feels isolated even though she has found a true love with Raphael.

As with the other books, this is one part mystery, one part romance, one part urban fantasy.   While I think the world is rich and the romance is satisfying, I did feel that there is a tendency to overdwell on some issues.   There was a certain repetitiveness in passages that I could have done without.   I do, however, like that themes and motifs brought out in Book 1 are carried forth in this book, indicating to me that you have a plan for this series which I appreciate as a reader.   B.