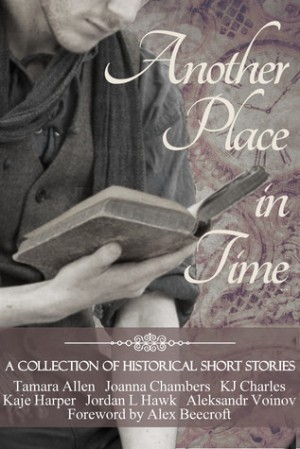 Note: All proceeds from the purchase of this anthology will be donated to AllOut.org in celebration of LGBT History Month, October 2014.

“Queer people have been left thinking that history does not belong to them — that outside this modern moment was nothing but a blank white space, or worse, nothing but unrelenting condemnation. It’s not good to be left feeling disconnected, as if you have no family and no place in the world, as if you don’t belong,” writes Alex Beecroft in the introduction to this anthology. A powerful sentiment, which left me pretty disappointed that the book contains only m/m stories, when the world of “queer” encompasses so much more. Thankfully, there were few disappointments aside from that.

What I appreciated about this anthology, aside from the high quality of the writing, was that most of the characters face conflicts that have nothing to do with sex. Despite some regrets about necessary compromises, they’re primarily coming from a place of acceptance and not fighting against their sexuality. Each story is definitely a romance, but the focus is less on being gay than on living in a particular time and place, while also being gay.

“Office Romance” by Tamara Allen takes us to the Unites States shortly after World War I, and two young men who are struggling to recover from their wartime experiences, each in their own way. When an efficiency expert pits Frederick Wetherly against his colleague Casey Gladwin in a competition to keep one job, Frederick is disheartened but determined to win. It’s not just that he needs the money to pay doctor bills, but the kindness of his fellow workers has made the office a homey place — and he certainly deserves the job more than Gladwin, who’s always flirting and socializing when he should be working. Then fear of losing causes Frederick to act unethically, and he discovers there’s far more to Gladwin than he had realized.

Narrated by Frederick, the tone of the story is quiet, even ordinary — a sympathetic glimpse at an Everyman who happens to be a gay Everyman. It’s not just a romance, but a story about waking up, rejoining the world, and once again being able to fight for what you believe in. As is typical for Allen, the one sex scene is warm rather than hot — without being at all coy or euphemistic — and seems just right for a 27 page story. The progression to a happy-for-now ending feels a little fast, but forgivably so. B

“Introducing Mr. Winterbourne” by Joanna Chambers takes us to a more familiar historical setting and characters. As the third son of an earl, Lysander is being pressured into joining the Church, when what he really wants is to manage an estate. But to his family, his love for the outdoors is simply “mucking about with horses and mud,” only fit for a child. When he’s asked to show the wealthy but lowborn brother of his soon-to-be brother-in-law around town, Lysander becomes even more aware of the snobbishness and uselessness of his family and social circle. Then a fencing match gets oddly heated, and he senses an opportunity he’s rarely encountered before.

“The Ruin of Gabriel Ashleigh” by K.J. Charles is also a Regency about a lord’s extra son and a wealthy commoner, but brings an awesome old skool vibe — an intense version of one of those wacky “stake your daughter at the gambling table” plots. Except this is m/m, so it plays out somewhat differently. I was on the edge of my seat as old antagonists Ash and Webster battle in a winner-take-all game of cards in which the stakes get increasingly odd and thrilling — first the coat off Ash’s back, then his shirt, then…? The end result — no pun intended — is blistering in its intensity.

“Unfair in Love and War” by Kaje Harper is the longest of the stories, taking time to create complex characters and a developing relationship. (As well as multiple sex scenes.) Warren comes home to help his mother after his brother’s death in World War II; exempt from service because childhood polio shortened one of his legs, he’s hoping to find a job that will contribute to the war effort. His return home starts with a bang when he interrupts a laughing group painting a swastika on a neighbor’s door. The new neighbor is Stefan, a Swiss immigrant who is also unable to serve, because of seizures. Assumed to be German, he’s become a target for neighborhood rage.

While helping Stefan repair his damaged home, Warren discovers that the beautiful younger man is interested in him, yet withdrawn, shy, and somewhat traumatized from a previous bad experience. He introduces Stefan to good sex, resolutely bracing himself for when his lover gets bored and moves on. But Stefan is holding in a lot of pain and secrets, and their supposedly casual relationship becomes highly complex.

The romance is nurturing, involving, and emotional, but I also particularly enjoyed the sense of time and place in this story. Like most of the stories, it’s a portrait of a gay man who’s just living his life, yet being gay is a bigger part of Warren’s identity — he’s even out to his family. But it’s not his only identity, and being an American, a son, a brother, and a part of a community all have an impact on his feelings. B

“Carousel” by Jordan L. Hawk is an odd-man-out in the anthology, a paranormal mystery story with a touch of horror. It’s also part of the “Whyborne and Griffin” series, but isn’t hard to follow as a stand-alone. The setting is a fictional town in New England; the time unspecified, but apparently around the 1900s. Noted detective Griffin Flaherty is asked to investigate a child’s disappearance, a task which gets him and his lover Percival Whyborne into unexpected danger.

There’s some effective creepiness to the story, but the romance felt awkwardly inserted; it might read better if you’re already familiar with the couple. The most interesting aspect in terms of history is Griffin’s backstory: he was adopted from an orphan train. Having been rejected by his adoptive parents because of his lover, he’s now torn between wanting to look for the biological brothers he lost, and being worried that they might reject him as well if he finds them. The intellectual, somewhat strait-laced Percival is also intriguing, and I’m curious to read more about him. But I don’t think this story fits the overall theme of the anthology well. C+

“Deliverance” by Aleksandr Voinov is a rewrite of a story that’s no longer available, and follows the novella The Lion of Kent. (Which may or may not be a romance — it clearly doesn’t adhere to the usual rules.) You don’t see medieval m/m that often, for obvious reasons, and the resolution of the conflict here is far from tidy. (A sequel is planned.) But it is a very stirring story, and satisfying in a unique way.

William joins the order of the Templar monks seeking “solace and redemption.” Fighting infidels gives him a sanctioned outlet for his aggressive nature, and six years of complete chastity have tamped down other needs. Then his former lover Guy turns up as a pilgrim knight, and insists on not only reminding him of the pleasure they shared, but on putting up a fight for his soul.

Of all these settings, William’s world is the farthest away from ours — not only in terms of actual time, but in terms of language and mores. The prose does a good job of creating an alien atmosphere that’s still understandable and relatable. (Although William’s mindset can be an uncomfortable one to be in.) The tempestuous, competitive physicality of William and Guy’s relationship gives the story a lot of energy, and though the resolution leaves many loose ends, it fits. B

Although I didn’t love every story, I can’t give an anthology with so much terrific work in it less than an overall B. I should point out that I noticed two minor editing errors, but the production was fine otherwise.