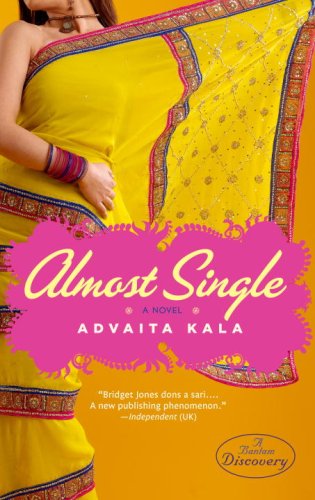 Our recent discussions about multiculturalism here at Dear Author reminded me to pluck your book out of a stack sent to me by Jane – our distributor of all advanced and finished copies. The pull quote from Independent clued me in as to what to expect – namely Bridget Jones in a sari. But I think saries are lovely and India is a country which has always interested me.

Aisha Bhatia has the standard chick lit accouterments – a slightly boring job with a boss who makes her life difficult just because he can. She’s got a coterie of friends – one single woman, one ‘getting a divorce’ woman and a Gay couple, a mother who nags Aisha about her dwindling marriage prospects. She and her friends go out to meet and mingle in the Delhi night spots. Aisha is perpetually almost broke due to spending sprees and enjoys a glass of vino whenever it’s offered.

She meets a cute guy under embarrassing circumstances. Thinks he’s out of her league and snotty. Gossips about him with her friends. Manages a few more prat filled encounters with him all the while starting to fall for him. Then, when she thinks all is lost, manages to hook her man.

It’s pretty standard stuff for those who have read even a few chick lit books. I’ll be honest and say that if it weren’t for the hook of the story being in India and getting to learn a bit more about that culture and country, I probably wouldn’t have started or finished the novel.

I do like that you don’t dumb down the Indian aspects of the story. Not all the words or conversations are immediately translated into English. The meanings are fairly clear from the context and there’s always Google should a reader want to know more. The characters are presented from an Indian-centric POV and, like my initial forays into British chick lit, I enjoyed the window into a different mind set than the standard American books.

You have an easy to read writing style and I breezed through the novel in one afternoon. It is what it is and you deliver on that. But I guess my search for any evolution in the chick lit genre will continue. C+

→ Jayne
Previous article: Top Books of 2009 by Jia
Next Post: REVIEW: A Man Worth Keeping by Molly O’Keefe