REVIEW: Accidentally in Love by Jane Davitt and Alexa Snow

Joan/SarahF has favorably reviewed some of your previous books here at DA, but I had somehow overlooked them. When I came across the excerpt for Accidentally in Love, though, I was hooked. I’m a fan of opposites-attract romances, the writing in the excerpt was strong, and I was curious to see how the characters would develop: Could you make Cal into a believable romantic hero? And was Tom a fake ugly duckling or a real one? You delivered the substantive goods in both cases, and in ways that sometimes surprised me. 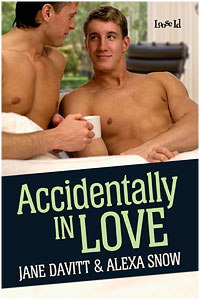 Calvin Reece is a successful professional photographer who travels frequently for work and shares a house which functions more as a landing pad than a home. Cal is handsome, decent, and emotionally shallow. He has no trouble hooking up for passing one-night stands and that’s pretty much all he wants in his relationships. Tom Holden, on the other hand, is shy, introverted, and almost pathologically afraid of making emotional connections with people. He has a successful website design and consulting business, he lives in a house he acquired from his parents, and he avoids social occasions as much as possible. Tom and Cal meet at a dinner party thrown by common friends. Cal notices Tom because he dresses so badly (coordinating shades of mustard!) and Tom notices Cal because he’s handsome, charismatic, and self-assured. Cal barely notices Tom at the party and hooks up with a more appropriately gorgeous and outgoing man, so Tom mentally writes him off. But Cal needs a new place to stay and Tom needs a new roommate, so they reluctantly join forces and get to know each other. As the story progresses, Cal and Tom slowly become friends and then more than friends, and in the process, they both mature and confront their own weaknesses and insecurities.

In a book like this one, where nothing much happens in terms of plot, success is going to hinge almost entirely on the individual characters and the development of the relationship, and you definitely deliver on those two fronts. Cal moves in and is cheerfully oblivious, Tom is uptight and nervous about having him around. A series of events lead each to learn more about the other, and they move from awkward acquaintances to friends to two people who know each other well and are attracted. When they finally recognize and articulate their feelings for each other, the scenes are well done and rewarding for the reader, because by that point I felt that I knew a lot about who Cal and Tom were and why they were falling in love.

At first it seems unlikely that Cal and Tom will even be able to communicate, much less become friends:

“You’d tell me if I was doing something that bugged you, right?” Cal asked. Tom seemed so diffident at times, and Cal could imagine him being taken advantage of. He knew he could be a little overwhelming at times, and he didn’t want Tom to feel pressured into agreement on anything, no matter how trivial.

Tom smiled as if he could tell what Cal was thinking. “I’d tell you. I’d probably be way too blunt about it, just to warn you. But I’d tell you.”

“Good to know.” Cal privately thought that Tom’s confidence wasn’t high enough for him to be truly blunt. “Though you’re showing a lot of restraint in not telling me that I need a shower.”

“That comes under the heading of ‘personal,’” Tom said. “I don’t go there. Your business. If I don’t like the way you smell, I’ll leave the room.” He gave Cal a sidelong glance. “I’d appreciate it if you did the same for me. Stay out of my personal life, I mean. I don’t need advice, and I’m not a charity case.”

Cal progresses from being a carefree guy who can easily get what he wants, i.e., a quick, no-strings hookup, to someone who realizes he wants Tom, and since the only way he can have Tom is to be serious about him, he thinks carefully about whether he can do that. When he decides that he can and he wants to, we believe him. Tom is not only a virgin, he hasn’t had intimate relationships with anyone. He’s an only child, he had few friends growing up, and his parents don’t understand him or try to (and it’s only partly because he’s gay).  The scene in which Tom and Cal have brunch with Tom’s parents will ring painfully true to anyone who has experienced a dysfunctional family relationship.

Tom’s birthday, and Cal’s desire to give him a proper birthday celebration, provide the catalyst for them to confess their feelings to each other and act on them. It’s a long stretch of pages, and by the time I got there, I was as ready as they were to see them get together. You portray this part of the story well, without changing either man’s basic personality or character. Tom is still insecure and wary of intimacy, and Cal is still the decent guy that tries to ensure that his partner is enjoying himself.

“Stop.” Tom held up a hand, then slowly reached out and took hold of Cal’s hand, which was so reassuring Cal thought he might cry. “I don’t want you not to touch me. I really, really want you to touch me. I just—this is too fast. You can’t tell me that you want me one minute and suck me off the next. I don’t work that way.”

Cal nodded. He would have agreed to anything in that moment. “I know. You’re right. I’m sorry.”

“Stop that too.” Tom gave him a severe look. “No more apologizing.”

“Stop doing that too,” Tom said with a groan.

“What? Whatever it is, I will. I mean I won’t—” Cal ran out of words and gave Tom a helpless look.

“Stop looking so goddamned cute,” Tom said. “I can barely cope with you being all kinds of hot, but if you throw in adorably appealing too, I’m toast.”

“I’m going to kiss you,” Cal warned him after working that through and deciding he’d just been handed a green light. “On the mouth, hands behaving themselves, no tongue.”

“Do those rules apply to me too?” Tom said, and okay, that was blatant flirting and deserved to be rewarded in every way Tom would allow.

As the excerpt suggests, these two talk about their feelings quite a bit once they admit their attraction. But it worked for me in the context of the characterizations. Tom is a reclusive virgin and Cal has never thought about really being in love, so even the most inarticulate guys are going to have to figure some stuff out.

More problematic, however, was where you were able to take the story once they become a couple. They already live together. The scene with Tom’s parents effectively writes them out of the picture. So the only impediment to their relationship is whether Tom will believe that Cal can change and settle into a loving, monogamous relationship. There is an intense conflict on this point toward the end of the book, which is resolved fairly quickly. Overall, the last third of the book is a bit of a letdown after the strength of the first two-thirds, which is understandable but unfortunate.

One other minor complaint: while much of the writing is very good, the repetition of the main characters’ names became overwhelming after a while. Cal, Tom, Cal, Tom, Tom, Cal, and so on. I realize it’s difficult to use pronouns when you are writing m/m, but there are various ways around it and I wish you had tried out more of them.

Despite these drawbacks, I really enjoyed reading this. Both characters came alive for me on the page, standing out from the stock m/m protagonists we see all too often. I look forward to reading more of your work. Grade: B

So the deal with Loose Id is that you can only buy these in the retailer stores a month or two after their release. The digital ISBN is 978-1611184068