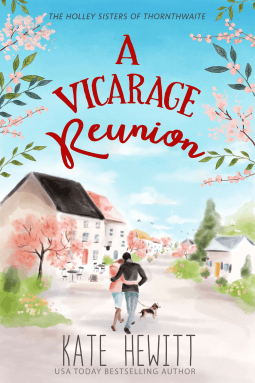 Welcome to Thornthwaite, a quaint village tucked up in England’s beautiful but rainy Lake District… where homecomings and surprises await the four Holley sisters…

Esther Holley, the eldest in the family, has always had her life firmly in control until a miscarriage knocks her off course. Two months later, still emotionally spinning, she separates from her husband Will, a sheep farmer and man of few words and moves back in with her parents.

Life as a singleton thirty something living in her parents’ house is miserable, but Esther is determined to re-boot her life, including going on a few unfortunate dates. She’s shocked when tight-lipped Will shows up on her doorstep determined to woo her back. They’ve been married for seven years, but Will wants to return to the beginning, dating and getting to know each other again.

New challenges face them as they start over–and new chances too. Can Esther and Will save their marriage, especially when faced with the hardest decision of all?

After reading the introductory novella for the Holley Sisters of Thornthwaite series, I knew that we’d be getting the stories for four sisters, daughters of the local vicar of the small English village. Esther is the eldest and there were signs in “A Vicarage Christmas” that all was not well between Esther and her husband Will. The story starts off with a bang, right in the middle of their conflict.

I don’t think it’s a spoiler to include the information that Esther has a miscarriage as it’s mentioned within the first few pages of the story. As painful as this is for both Esther and Will to deal with, it opens even more cracks in their marriage. Neither of them is the type to let their emotions all hang out and for their seven year marriage, this has been fine – or so they thought. But two months on from the devastating appointment when she found out, Esther feels so mired in misery and hopeless that she knows she has to get out. When she announces one morning to Will that she’s leaving, he’s stunned, hurt and yes a little angry.

Esther has never said anything to him about being that unhappy. Sure he knows she’s suffering, as is he, but he genuinely thought they could soldier through it. Now he’s questioning everything about their relationship. He always thought they just fit, almost perfectly from the moment they met and started dating. What else has Esther not told him and from the way she won’t meet his eye, he knows it’s something. Meanwhile Esther finds life back in the vicarage to be emotionally fraught as her parents are preparing for their move to China and her younger sister plans her own wedding.

Keeping up appearances and to avoid awkward questions, Will and Esther attend a colleague’s wedding where Esther is astounded to learn that her friend is leaving the government agency they’ve both worked for and believed in. Later on, she blurts something out to Will which hurts him even more. With her married life now in tatters, her husband emotionally gobsmacked and her professional life falling apart, what can Esther do to turn her life around?

There are a lot of emotions zinging through this story and things happening to the characters. Esther and Will have one of those marriages that outsiders see as rock solid but which actually papers over some major issues. The loss of the baby just finally gets things in the open and forces them to acknowledge and then deal with them. Communication is the main conflict and I thought this was portrayed well. They’ve fallen into a rut and kept to it until too emotionally spent to carry on any further.

While I like that things are not shown as being fixed with one conversation and Esther begins attending therapy sessions to work through some of her issues, the barely-over-a-month long time frame is fast to resolve all of this. Esther’s plans for life after she leaves her job occur quickly too. The epilogue which takes place three months later gives these issues more time to have played out though. Still I hope that neither is keeping any more secrets like the doozy that Will springs on Esther just as the book is ending. Perhaps that will be further resolved in the next two books. B

→ Jayne
Previous article: DAILY DEALS: A box set bounty
Next Post: REVIEW: The Sea Before Us by Sarah Sundin