REVIEW: In Bed with a Stranger by India Grey

This is a sequel to the Craving the Forbidden (review here) and I thought it was interesting to take an established relationship, shake it up, and still convince the readers at the end that these two could be happy beyond the pages of the book.  Sophie Greenham fell in love with Kit Fitzroy after pretending to be his brother’s fiancée.  Kit leaves for Aghanistan and when he returns, he is not the same person.  There is a bridge between the two that Sophie is unsure of how to cross.  The bridge began to build over Kit’s deployment, with his email responses and his phone conversations becoming terser, shorter. 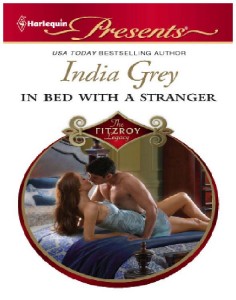 Kit is suffering from a case of PTSD. It’s unclear how severe it is. He is jumpy at loud noises. He is experiencing night terrors.  He is feeling tremendous guilt over the injury to one of the young soldiers in his unit. Sophie acted quite young in this book and I was disappointed by her.  While Kit was gone for five months, it didn’t seem like Sophie did much to prepare herself for his return.  Her lack of understanding of what Kit might be going through seemed a tad self centered and a bit juvenile.

Both Kit and Sophie mask their relationship problems by enjoying each other physically, but Kit wonders that the shortness of their relationship (only three weeks before his five month deployment) could possibly withstand his mental and emotional difficulties.   They were, as Kit acknowledge, virtual strangers. Sophie preferred to believe that their physical closeness could not exist without emotional closeness.

The story transitions from Kit’s return to a trip to Morocco to meet with Kit’s estranged mother and to discover the secrets of his past.  Much of the book takes place in Morocco and the simple relationship problem is compounded by standard HP tropes which is where I felt the book faltered.  Sophie grew up with a hippy mother who refused to acknowledge ordinary structural bonds like the “mother/daughter”.  Her unconventional upbringing made her yearn for a stable home and a love like the one she believes she might have with Kit.  However, Kit’s wealth and titled family make her feel like that awkward commune girl trying to fit in with the cheerleaders at high school.  Sophie overcompensates, driven by her feelings of inferiority.  She never wants to show weakness in their relationship which, in turn, leads Kit to believe that she cannot handle the darkness of his emotions.  This emotional tug of war is great and the use of the sexual tension pushing against the emotional tension was moving.

I was less enthused by the mystery of Kit’s parentage. I felt that was an unnecessary complication and conflict and led to too easy of a resolution.  Kit hadn’t seen his mother since he was six yet the feelings of abandonment and betrayal were quickly resolved.  Combined with all the other emotional struggles Kit had to deal with, this seemed improbable. Further, I didn’t like the quick way in which Sophie became attached to Kit’s mother. In some ways, perhaps it was reasonable because Kit’s mother was like what Sophie wanted her own mother to be, but Sophie’s first priority should have been Kit’s emotional well being, just as making Sophie happy was Kit’s first thought.   This desire to push reconciliation on Kit was frustrating and seemed, again, a bit selfish.

This is not to say that Sophie was unlikeable but that this portion of the book was my least favorite.  I liked the idea of exploring their relationship at greater length, but I didn’t enjoy the mother complications, particularly because of how it was resolved. I will say that this story is very sexy and I appreciate the open door nature of the book, particularly having come off a stint of reading a few Harlequin SuperRomances where the sexual tension was about as spare as the fat on Heidi Klum’s thighs.  C+