REVIEW: A Season at Brighton by Alice Chetwynd Ley 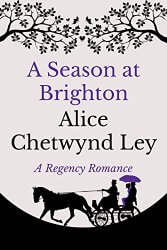 When the Countess of Nevern writes to say that her son, Viscount Pamyngton, is unexpectedly returning home to Nevern Hall, Lady Denham sees a perfect opportunity for one of her daughters to capture him in holy matrimony. The only question is which girl will he choose?

Of the three Denham girls currently out in society, Eleanor is deemed the most attractive, even if she is rather young, and quite fancies the idea of marrying Pamyngton and becoming the next Countess of Nevern. Louisa, the eldest, cares not a jot for Pamyngton or his title, as her heart lies elsewhere — she is hopelessly in love with a clergyman whose meagre living makes him an entirely unsuitable suitor.
And Catherine is an impetuous little minx, who often speaks without thinking and is far too flighty to be the wife of a viscount!

This is not the first time a union between Nevern and Denham has been contemplated. Plans were once made for a marriage between Pamyngton and Fanny Denham, the oldest of the six Denham girls, but when the viscount fell madly in love with the beautiful Georgiana Eversley, the wedding was cancelled. Fanny is now happily married to a colonel and residing in Brighton — and Louisa, Catherine, and Eleanor have been greatly looking forward to visiting their sister on a bit of a holiday. But Pamyngton’s arrival at Nevern Hall throws these intentions into disarray. Lady Denham has absolutely no intention of letting any of her girls out of her sight as long as Pamyngton remains nearby.

But Catherine has other ideas and determines that she shall just have to make her way to Brighton herself. Her adventure quickly runs afoul as she discovers the dangers of being a solitary young woman walking the roads with neither protection nor money. So when a mysterious stranger helps her to return home unscathed she is deeply grateful.

However, Catherine is mortified to discover the next day that her handsome stranger is the very same Viscount Pamyngton that her mother desires her to marry. Desperate to avoid further embarrassment, she does her best to avoid Pamyngton all together. But it’s only when he starts to take an interest in her older sister Louisa that Catherine realises her true feelings. Is she already too late…?

So I’m continuing on with my dive into the “trad Regency” romances of Alice Chetwynd Ley who certainly seemed okay with roughly 10 year age differences between her heroines and their heroes. YMMV on this.

From the beginning, these two show a matched wry, dry sense of humor even if they don’t allow the other to initially see that. He is mortified that his mother is matchmaking him again – and without even telling him! His verbal flips to be honest with Catherine, aka Katie, without revealing his identity are amusing. She is horrified when she discovers who he actually is after what she said about him.

Though he enjoys Catherine’s candid conversation – much more so than if they had merely banally discussed the weather – he can’t help himself and pushes a little to ask her how she would react if the Viscount were to come offering for her hand. Not very well, she replies with actually a good reason for it. What she currently knows of the Viscount is that he was supposed to marry her sister but cried off for love of another woman. She, Catherine, doesn’t want to be a second best bride. Makes sense to me even if that probably is more a modern reaction. Then however she caps her comments by saying she does want a man who will love her to distraction and shower her with gew-gaws and out of season flowers. Or at the very least, not a man languishing for love of another woman. He thinks a minute then announces she deserves this. She needs to watch out for karma though.

Lady Denham, Katie’s mama, has some withering things to say about reading novels which are “unwholesome, and vastly lowering to one’s moral tone.” They also put “stupid romantic notions” into her daughters’ heads. Hmmm, she wouldn’t like DA!

Katie seems to get herself into troubles mainly when her unwanted friend is near. Equine troubles, mainly. I don’t think I’d want to partake of the bathing boxes while wrapped to the gills either. Yet Katie also discovers that – surprise, surprise – she actually enjoys sparing with him. Though Katie continues to spurn him, and thus intrigues her sisters, he hasn’t given up on her yet.

There are lots of Brighton details: Ship Inn, masters of ceremonies, donkey rides, Prinny and the Pavilion plus some info about Mrs. Fitzherbert. If you know this stuff, you can skim but it’s not done in a research paper mode but rather integrated fairly well into the story.

Katie is 19 and acts it. I don’t mean this in a bad way though she is impulsive at times and can form flash opinions. I get that. I remember doing these things when I was that age. Now that I’m much older, I can sit back and say, “She’ll mature. Hopefully.” The signs that Katie and Pamyngton are changing their minds about each other are subtle but there. This also somewhat mitigates my sometimes annoyance with Katie and her coldness or seeming disdain for Pam. She’s confused about her feelings and embarrassed to be caught out a few times. Readers just have to be like Pam and keep the faith.

She does have a good heart though and the situation she ends up getting herself into is done for the romance of another and deserving couple. Yes, it is silly and yes she should have known better but the one who takes advantage of her knows what to say to overcome her natural skepticism. Once she realizes what’s afoot, she does take an active role in getting herself out of it. When love triumphs at the end, at least Pamyngton knows full well what he’s getting himself into. B