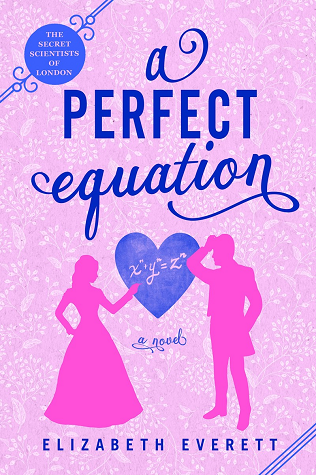 I came across this book somewhere and, intrigued by the premise, snapped it up, before realizing it’s the second in a series (The Secret Scientists of London). Luckily, I’m not a stickler for reading in order.

Letty Fenley and Lord William Hughes, the Viscount Greycliff (known as Grey) are acquaintances and adversaries as the book opens. They are bound by their connection to Athena’s Retreat, the secret society founded by Grey’s stepmother Violet (heroine of book one). Athena’s Retreat is a club that ostensibly allows women to pursue gentle pastimes like growing orchids; really it provides a space for female scientists of all stripes to work on experiments or other scientific pursuits. Letty, a mathematician, is a member of the retreat and Violet’s second in command.

Letty and Grey have another connection, dating back six years, one that explains their mutual hostility. Letty was once in love with Grey’s cousin, another budding mathematician. Letty thought that they would be married once her beau overcame his father’s objections (Letty, the daughter of a shopkeeper, was considered too much of a step down socially). Instead, the two were caught in a compromising position, her lover abandoned her, and Letty became persona non grata in society. Grey was given to understand by his uncle, a man who mentored him and treated him better than his own father did, that Letty was a shameless social climber trying to trap Grey’s cousin.

Now Letty and Grey are thrown together – following a personal loss, Violet and her husband Arthur are withdrawing to the countryside for a while. But Athena’s Retreat needs looking after. A rowdy group of malcontents calling themselves the Guardians have been picketing the house after word gets out that female scientists are experimenting there. These are the sorts of men who think that a woman’s place is in the kitchen, barefoot, pregnant and making her man a hearty meal. There’s a very real threat of violence, and so Violet decides that her stepson Grey – with whom she is very close – and her close friend Letty can run things together. Grey will handle security and Letty will take over as president of the club, managing the daily operations of Athena’s Retreat.

Grey immediately tries to put his foot down and scale back operations at Athena’s Retreat, citing the threat of the Guardians as a reason to lay low for a while. But he has another motivation, one that casts his concerns in a more self-interested light.

Grey’s uncle is the head of a shadowy government organization that…deals with threats to the government? I guess? I was a little shaky on that; maybe it was made clearer in the first book. (More likely I’ve read of so many gentleman-spies in historical romances that I tend to skim the details the way I do sex scenes these days.)

Anyway, Grey’s uncle is planning to retire, and with his retirement there is an opening for his replacement. The position is Grey’s greatest wish, but it comes with strings – both Grey’s uncle and the men who are set to vote on the new director want Athena’s Retreat shut down.

Look, I love moral ambiguity in a romance, until I don’t. I feel like I should have appreciated that Grey has ambitions and is capable of self-interest. Shades of gray in heroes and heroines are good! And yet…it felt a little distasteful to me, partly because Letty didn’t know anything about it for a good part of the book; she believed his reasons for wanting to shut down Athena’s Retreat were much more straightforward.

Letty is preparing to compete (disguised as a man) in a prestigious math competition called the Rosewood Prize. She has never recovered from her “disgrace” six years before; while she believes in women’s equality, she’s internalized messages that lead her to feel shame over her mistake. She’s retreated to the orderly and safe world of mathematics; that and her family, whom she lives with and who have apparently not judged her, sustain her.

There were a couple of scenes that painted math the way that Letty sees it in a way that I found interesting (as a non-math-person), such as this one:

Today, she walked a familiar path to an empty beach where waves of numbers lapped at the shore. Wasting no time, she set her bare feet, one after the other, into the water. Swimming out to the center of her ocean, she then sank along the y axis, ribbons of theories tickling her bare calves, until she reached her current work.

I have no idea if other math people experience numbers and theories in a similar way to this description, but the concept intrigued me.

Grey has his own trauma, of course. As a child he was given to epileptic fits, and as a result his father hid him away, both out of shame and because he believed that keeping Grey quiet and away from other roughhousing children was the best way to avoid a fit. Grey’s uncle finally took him under his wing and taught him to rigidly control his habits and emotions; Grey has not suffered an episode of his epilepsy in many years and credits the regimen his uncle taught him.

So you have two characters who for different reasons are both very afraid of falling victim to passion and possibly love. Grey was ultimately the tougher nut to crack, which is one reason I found Letty to be a more sympathetic character.

One aspect that I felt ambivalent about was that the womens’ scientific pursuits were often played for laughs in the story. The running joke is that their experiments frequently lead to explosions, but I didn’t find it that funny. It seemed to undermine the “empowered female scientists” theme. Plus, not everyone at Athena’s Retreat was a chemist. What are these other ladies (entomologists, etc.) doing that would lead to such chaos?

When, late in the book, a malevolent outside entity takes advantage of the womens’ reputation for accidents to stage a fire, it made me feel even less charitable about the light presentation of the women as ditzy and accident-prone.

A Perfect Equation didn’t break much new ground, but it was well-written held my interest pretty well. I’ll give it a high B, and will consider trying other books in the series.