I finally discovered you with the last book you wrote and got all excited when I noticed that Jane had already gotten your newest one, “A Lot Like Love” for us. Jane’s good about that. I can say that from the way I also enjoyed this one, it looks like we’re going to have a long and wonderful relationship. At least, I hope we will. 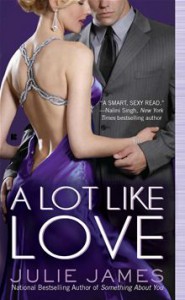 FBI agent Nick McCall senses Something Is Up when he gets called into his boss’s office but as long as he can get it done before flying out to New York for his mother’s “surprise” 60th birthday party, all will be good. Only when his boss starts sliding then twisting – and everyone knows twisting means bad – the sleeve on his Starbucks coffee, Nick braces himself. The deal is that Nick is supposed to use his undercover expertise to help the new guy, Huxley – who has sharper suits than Pallas’s partner, agent Wilkins, and who actually wears a sweater vest – with the case Huxley’s been working on for months namely to nail Xander Eckhart for money laundering.

They’ve got a plan to sneak bugs into Eckhart’s swanky restaurant to tape conversations between him and Roberto Martino’s people – all they need is an “in” to get them there. And the “in” is one hot Chicago socialite and wine store owner Jordan Rhodes. For the price of springing her twin brother Kyle, aka the “Twitter Terrorist” from jail 14 months early, Jordan will take Huxley with her to an exclusive wine tasting party during which the bugs will get planted.

Problem is, Huxley gets the flu and Nick gets the job of being Jordan’s date for the night. Since the two get along only about 18% of the time, it’ll be a test of Nick’s undercover skills and Jordan’s desire to see Kyle go free. And then things get worse when a jealous Eckhart puts a PI on Nick’s tail and the one night boyfriend act goes full time. Can Jordan and Nick keep the sarcastic quips to a minimum before morphing into not being able to keep their hands off each other long enough to close the case?

I liked a lot of things about this book. It’s funny, the plot isn’t over the top, Nick is such a guy and Jordan is more than strong enough to match him without being what I know a lot of readers don’t like – kickass. I also like that I can see the feelings growing between these two without Nick suddenly turning into an emo or Jordan becoming clingy. They remain the characters you start us out with even as they fall in love and we get to see them realize their attraction for each other, think about it, rearrange their new reality and act on it. Nick’s never going to enjoy “Dancing with the Stars” for itself and he’s always probably going to prefer bourbon to wine but hey, he can watch some sequins and spray tans if it gets him laid.

He’s also the man on the spot if a girl needs to have a slight breakdown after having a gun held to her head. But Jordan’s no wimp, as Nick points out to the men in her family, and she keeps her cool when it counts plus has a 10 foot tall sense of loyalty to those she loves. I love the way she doesn’t cut Nick any slack and remains fearless regardless of his “don’t fuck with me” face.

I do have some problems with the investigation side of the plot. Nick spouts off a lot of information about what’s just gone down before the investigation is closed and even tells Jordan a teensy bit about his next potential cases. Would this happen in real life? And while I’d love to believe that law enforcement could get his perfect cover into place within 24 hours, this is the government we’re talking about.

Still, I had a great time reading the book and loved watching yet another tough FBI agent meet his soul mate where he least expected her. Poor chief Davis must really fear he’s running a matchmaking agency rather than an FBI field office at this point. And though I’m excited about Jordan’s brother Kyle in the next book, when will we get Wilkin’s story? B