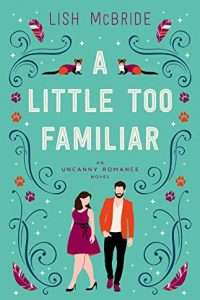 Love brings out the animal in you

Louise Matthews has got it good. Wonderful job? Check. Loving family? The best. Roommates? Pretty fantastic, thank you. All of this helps her

stay focused on what she wants: to finish out her apprenticeship and become a fully licensed Switch-an animal mage who bonds familiars to their witches.

Declan Mackenzie doesn’t want to be a lone wolf, but he doesn’t have a choice. Girlfriend? Gone. Sister? Starting a new life. Parents? In prison where they belong, thankfully. All he wants is a fresh start-new home, new job, new life. What he gets is a house full of witches, a fledgling phoenix named Dammit, and rogue ferrets who won’t stay out of his business.

And he could handle all of that if it wasn’t for Louise. It’s not great to crush on your roommate. It’s even worse when you realize she wields the kind of

magic that sends you running for the door.

Still, Declan is no pup, and he’s not going to let this set him back.

As I’m not one to go out and yell “Wow a shapeshifters book. Gotta have it!” I’m having a hard time remembering how I heard about this novel and decided to give it a shot. But I’m so glad I did as it’s a lot of fun but fun with a bang up ending that, if it could be transferred to the big screen, would have people laughing then yelling with excitement. Hmmm, things to remember about it? Be careful of bad magic, ferrets have dirty minds, and don’t do anything you don’t want the pigeons to see because they see everything.

Declan is leaving his job and his sister with her new girlfriend which is a little awkward as that girlfriend used to be his.

No job, no woman, no place to live. You have become the cliché of the lone wolf and possible inspiration for a country song.

Everyone is being adult about it but Declan is looking forward to moving into a friend’s house. This doesn’t quite turn out to be what he’s expecting and after a (short) rocky start, he settles in with a rag-tag found family who have several friends and even more family in the area. There is cute banter and characters who take no shit from each other yet still have each other’s backs. This turns out to be a good thing as Declan’s past – an awful past – is coming to get him. To help protect him, Lou (an animal mage) binds them together in a dream. This, for Reasons, is heavily frowned on in the Uncanny community but when Declan’s past comes out, the Uncanny might not be wild about what Lou did but they understand and approve of the effort to help Declan. When the Evil Past comes calling, will Declan and his new “pack” be able to defeat it?

There is a lot to learn about these characters and the set up of the book but the beginning actually doesn’t drag as much as other books I’ve read with a similar amount of information that needs to be explained. A bit of exposition about them makes it faster but then Declan arrives, all innocent and knowing nothing, so as he learns, we learn.

I was fine with the funny banter, the amusing familiars, the inclusive family – with POC and LGBTQIA rep – but if this all sounds like too much then the book might not work as this is carried out for most of the story length.

“But now I’m intrigued. Did you finally bang our newest employee?” He leaned forward. “As his friend and obvious mentor, I have to ask what your intentions are.”
“What?” I blinked at him.
He placed a hand on his chest, affronted. “You have debauched him. Taken his innocence. Ruined him. How will he land a duke? No, he’ll have to settle for an industrial upstart, at best. He’s lucky he has a dowry.” Will shook his head regretfully, sipping his coffee. “Tsk tsk, Louise.”
Van put her chin on her fist and leaned so she could look at him. “Are you reading romance novels with your nana again?”
“Never stopped,” Will said. “I would have you know that I’m an important part of her book club. I bring the cookies and the saucy commentary.”

Things move very quickly including the relationship between Lou and Declan. But there is still a fair amount of them sizing each other up and getting to know each other before the familiar bond takes place. Declan also discovers that in Lou’s extended family, he’s found a better replacement for the twisted pack situation he was raised in.

One interesting aspect is how Declan is viewed as the one who needs to be protected in the bonding relationship as he’s the shapeshifter to Lou’s human mage. There is a lot of initial consent protection enforced by the Uncanny Tribunal followed by consent asking and allowing between Lou and Declan. Lou’s job, binding familiars, also involves consent from each member of the pair.

In order to protect him more, he meets with counselors – thus allowing readers to learn his past in a not-too-expositionary way – and spends a lot of time strengthening his bond with Lou. This forces them to spend a lot of time together, talk, and learn about each other. Smexy times inevitably result.

I reached back with one hand. Hot skin. Hip bone. My fingers clasped it automatically, and I have never in my life been more turned on by a hip bone. Heck of a time to find out I had a weird fetish, though I had the distinct feeling that it wasn’t so much about hip bones as it was about this specific hip bone.

I should let go. I told my hand to let go.

My hand politely told me to go fuck myself. My hand was an asshole.

There might be some smexy times too close after injuries for my taste but Declan’s a werewolf and some of his super healing flows through the familiar bond to Lou, so okay. What Lou did – even if it protects Declan – isn’t taken lightly by anyone and I was glad to see that there could be consequences and ones that weren’t trivial as Lou loves her job and is getting to be good at it.

There is, at first, a vague amount of danger threatening Declan and anyone who would stand with him. This is gradually increased by means of some magical attacks as well as Declan and Lou worrying that things are quiet, too quiet. When all hell breaks loose, it occurs fairly quickly as does the rescue posse. The finale featured a means of protection that was hinted at from miles away but it was still mostly a down and dirty magical street fight with few holds barred including some low tech yet still highly effective airborne “missiles.”

The wrap up was good but I felt the epilogue was a bit too much sugar overload. Nice but it could have been shortened with no loss. As the book is labeled an Uncanny Romance, I hope that it will be carried on featuring some of the other characters. I really want to see how Dammit (yes, there’s a reason for his name) and Trick continue to bond and get an answer to something that happened during the finale section. But I had a fun time reading this one. B

→ Jayne
Previous article: JOINT REVIEW: You Were Made to Be Mine by Julie Anne Long
Next Post: Open Thread for Readers for July 2022