This is a reprint of a formerly published book.   Interestingly some of the book has been updated to make it seem more modern such as references to text messaging and more current popular culture references and, possibly even the clothes although I wasn’t quite sure of the latter.** 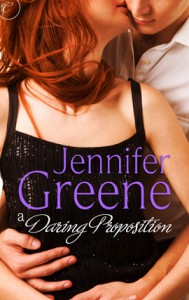 The set up has a big plot hole in that independently wealthy CPA, desirous of a child, asks a stranger to volunteer his sperm. She gets the idea from an article she read about a sperm bank in California that hosts the sperm of Nobel Laureates. Why wouldn’t she just go to that sperm bank instead of availing herself of local talent?

Still, I liked the characters and if you set aside the plot hole (that is never really addressed because Leigh’s explanation that Brian, the hero, didn’t like personal entanglements and thus was perfect for her plans only served to reinforce the idea that she should just use a sperm bank), you get an interesting story.   While it is a book I recommend, I think it is only going to work for those who like a certain type of book.   Even though the descriptions were updated, the tone was not.   For instance, the constant use of “lady” instead of “woman” seemed to harken back to an earlier time period as did the reference to “lady friends” or the heroine as “frigid.”   It reminded me of the category books of the 90s in tone and I enjoyed that but I wonder if some would view the tone too old fashioned.   And there are a lot of problems to overcome and those problems will be insurmountable for some, justifiably so.

Leigh Sexton is a CPA and independently wealthy due to an inheritance from her deceased parents.   She works as a CPA, not for the money but for the mental challenge and stimulation.   She’s also very private and does not partake of the social activities that many of her peers do which is why her appearance at a cocktail party thrown by Brian Hathaway’s firm to celebrate the end of an audit.

Apparently Brian Hathaway likes all women, “so long as they are pretty and prone” he was once quoted as saying.   This serves to be true when Leigh approaches Brian and says that she has a request of a personal nature.   This leads Brian to assume Leigh wants to have sex with him and begins the process of dishevelment: removing pins, taking off her glasses and the like. Leigh quickly disabuses Brian of this and lays out her deal: $10,000 for his sperm.   Brian is offended that she would think he would father a child, even through sperm donation and then want nothing to do with the child.   He turns her down for a whole host of reasons, but primarily because he feels that a woman who would offer him this deal would be too cold blooded to properly parent a child.

Leigh’s desire to be a mother, however, is unabated yet she does nothing to pursue her dream.   She doesn’t look into adoption. She doesn’t contact the Nobel Laureate sperm bank.   Instead, Leigh is fortunate because Brian comes back with an alternate deal. Marry him and she can have her baby.   Brian doesn’t really believe in the institution of marriage, but at thirty-five, he, too, would like a family.   Marriage to Leigh who would condone his extra marital relationships but also provide a solid foundation upon which to co parent a child makes sense for him.

But as they pretend to love each other for their family and friends and as they spend more time together, their respect and affection for each other deepen to a point where sexual tension is an almost palpable object.   Leigh, however, has been sexually traumatized which is why she sought out the insemination path believing she could never withstand a physical relationship with a man.   She tried once, only to hurt her lover badly and render her scared of all further intimate encounters.

What I liked about the book was the slow progression of the romance and the love between the two people.   There was no instant lust.   Leigh was perfectly happy, particularly in the beginning, to send Brian off to his other women.   As her feelings for him grew, her laissez faire attitude about time spent away from her and with others abated.   Pregnancy also wore away her confidence, showing her how she couldn’t really plan or control everything.

The story is told from Leigh’s point of view and her character arc is the focus, although it is told through the romance between her and Brian.   Brian is portrayed as very devoted and tender.   He made the right foil for Leigh. There is a bit of Brian-knows-best during the book (particularly in the beginning and toward the end), but I  thought Leigh was always the braver one in the relationship.   She was willing to admit her feelings and suffer the possible rejection whereas Brian was the reactor.   In the hands of a less skilled author, I think this could have been a wallbanger. I liked Leigh quite a bit and Brian was right for her and that’s what makes this book for me despite the plot holes and the magic peen that washes away all sexual trauma.   B-

** The updating of older books prompted me to write up an opinion piece that I will post in 2011. I thought it was clever in this book, but could see it having negative results in others.