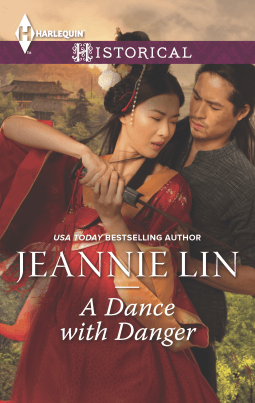 A promise sworn on the edge of a sword

After a failed assassination attempt on a corrupt general, Bao Yang is a wanted man. Taking refuge with an ally, Yang accidentally compromises the man’s daughter when they’re discovered alone. To save her honor, he must marry the beautiful Jin-mei immediately!

In Yang’s arms, Jin-mei feels alive for the first time. She’s determined not to lose him, even if it means joining his perilous mission… But when she realizes just how destructive Yang’s path could be, can she convince him that their life together could be so much sweeter than revenge?

When I saw this listed at netgalley, I did a fist pump and then almost sprained my wrist clicking on “request.” A Tang Dynasty historical novel from you is a yearly treat for many reasons. The setting is different from Almackistan, I always learn something new about historical China and the covers are so cool. Fans of “The Sword Dancer” will want to check this one out to see how Li Feng and her constable husband Han are doing.

While the book starts out in a city, it soon becomes a road/ship romance – with dangerous female characters. Might we see something in the future about Daiyu – pretty please. I love the cover too even if Yang and Jin-mei are shown engaged in flirtatious sword fighting rather than the flirtatious staff fighting that’s actually in the book.

One of the sweet surprises of the story is the relationship between Jin-mei and her father. She is his treasure and he means to see her honorably treated and married. Thank goodness her stepmother does a little better in the “readying Jin-mei for the wedding night” than Violet Bridgerton ever did for her daughters. Is that mirror based on an actual antique? Still Yang is a fugitive and wanted dead by the most powerful man in the province, which isn’t the best way to start a marriage. Her father has a plan for that. It’s too bad for the magistrate that he raised his clever daughter on tales of famous court cases. And even worse that Jin-mei remembered reading about a certain one.

Yang’s mission of revenge isn’t some flimsy thing. He is the Elder Brother of his family and thus due respect from his siblings and yet, he’s the one who has screwed up and the repercussions on his brother’s family weigh heavily on him. The reason behind his quest and need to eliminate the warlord is heartbreaking especially as he was the one who set the event in motion. Yet, the cost to see it through is high and already others have paid and continue to pay the price of Yang’s current failure.

Yang can and does fight but his preferred method of getting his way is through negotiation and charm. I love that Jin-mei sees through his charm and isn’t always charmed by it. She is a woman on the loose in a totally new world. With no experience outside of her family home, she squares her shoulders and takes it full on and makes her own luck. She uses her wits to track her husband, boldly negotiates passage onboard ship and then initiates training in fighting techniques. No, she’s not an instant success but she’s got the guts to do something other than just sit there and she chooses something she can see other women excelling in.

Jin-mei’s choice to follow Yang is equally necessary given her nature and the way she was raised to believe in truth and justice. When her reality is shattered and all her certainties become quicksand, she must make a decision between staying amidst the remains of her illusions or striking out with her husband and trying to preserve her cherished childhood memories.

During the course of their travels Jin-mei and Yang encounter married couples, couples who want to be married, and widows. Plus Jin-mei discovers the terrible price paid by Yang’s sister for his ambition. Through these we get a chance to learn of Tang Dynasty married life and the roles and ways women make do, survive and endure.

Yang might have accepted the betrothal and marriage as the price of doing business and a way to gain a strategic advantage but little things and comments along the way show he’s tickled pink to have got a smart woman such as Jin-mei as his bride. Now he’s got to learn the price she’ll demand to stay with him and realize it’s one he wants to pay. Meanwhile, Jin-mei’s eyes are being opened over the course of their journey to the fact that no man is completely good nor are most completely bad. She has to decide if she can accept Yang as he is, a flawed man who loves and adores her. By the time the story ends, I believe that they’ve both grown and matured into a relationship that will last them until they’re old and gray.

Jin-mei shot up to sitting position. ‘Will I have to listen to half-truths for the rest of our lives—why are you smiling?’

‘Even though you’re angry at me, you said “our lives”.’

He sprawled on to the bed with his head in her lap. ‘I find that endearing.’