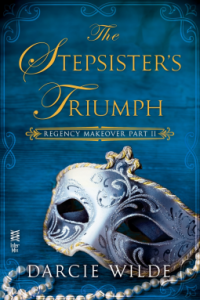 Madelene Valemeyer has never felt welcome in her father’s house. The daughter of his first wife, she will be one of the richest heiresses in England when she turns twenty-five. But for now, Madelene is just a miserably shy girl, tormented mercilessly by her stepmother and three half-siblings. Nearly unable to function socially, Madelene certainly can’t see that Benedict Pelham, the artistic son of a marquis, is falling in love with her.

Madelene, though, is done being quiet. With the help of her friends and fellow wallflowers, she is preparing to transform from shy mouse to brilliant Miss. But social success has a high price—is Madelene prepared to pay with her heart?

After reading the opening entry in this series (serial?),The Bride Behind the Curtain,” I immediately requested this part when it became available. When I saw the cover my thought was “Oh dear. Is this going to be a Regency “Shades of Gray”? Please no.” Whew, my prayer was answered.

Madelene is shy, painfully shy and used to being ignored. For her, this push for the limelight is difficult since she thinks it won’t last. Why? Because for her nothing ever has and she has to have a change of mindset. But will she? Benedict’s issue is his long standing grief and depression over the death of his wife. At first he had felt a little sorry for Madelene, for her shyness and lack of ease among the haut ton who considered these to be tantamount to bad manners. Then for the first time in years, he feels his heart beating again and knows it’s due to Madelene.

Meanwhile Madelene has suffered for years under the demands of her father’s second family for money to pay their bills and debts. She’s so browbeaten she’s ready to sign it over to her father – and thus to them – just for some peace. It will take a lot to renew her confidence in herself and her self-worth. She knows her feelings of bashfulness and shame are unwarranted but she’s had them so long that she’s comfortable with them and uncomfortable at the idea of breaking free. She knows how to act with them and what to expect. Benedict also has something holding him back, a dark secret that drove him to drink after his wife’s death. Could the classical Greek subjects he used her as a model for tell the tale?

The three young ladies, and Miss Sewell that daring woman, need to host a glittering ball to crown the Season and together they scheme about what will be needed. Something dazzling that will amaze the ton. And to the rescue comes Cousin Henry – the great London thespian. I adore Cousin Henry. He sounds like a man to sit and have lunch with while he amuses one with all the theater on dits. And perhaps his presence will allow Madelene to continue avoiding Benedict after their disastrous portrait sitting. Only it won’t because Cousin Henry can get Madelene to Reveal All her secrets to him and he, as a great actor, is going to help her. Cousin Henry is a delight.

Madelene takes serious stock of her emotions around Benedict. Is it affection or more? Is she just making up fantasies out of a longing for affection from anyone? The way her shameful family have treated her, this is understandable and good for her to not immediately jump into something before she’s sure. As Benedict is an artist, he can stare at her all day long – or all of the hour allotted for her portrait sitting – without it causing concern. He’s also used to sussing out his subjects’ emotions and quickly hones in on what Madelene has always kept hidden – her desire to be seen as she really is. Something her shyness has always precluded. When he initially balks, it’s Madelene who overcomes her fears and pushes back, demands what she wants and that he be the one who – through the painting – will show the ton who she really is.

As with the first novella, there are a few phrases here and there which sound modern to the ear though I’m not sure if they’re actually anachronistic. “We have to stop meeting like this.” Or “the old man” in reference to Benedict’s father. I enjoyed the story enough that these weren’t deal breakers for me.

The horrible family situation with which Madelene has been living for 9 years is revealed to Benedict from his gossipy father. No wonder Madelene has never felt loved by her father or his second wife’s children. Little by little, clues as to whatever has made Benedict such an angsty martyr to the past are dropped. Poor Benedict now not only feels beholden to some past event but also unworthy of trying to help a woman so badly treated. But surprisingly it’s Madelene who gives him the key to try. Making her feel better about herself makes him want to be a better man – to man up and face his fears.

Madelene’s not quite free of her old life yet. In fact, someone is determined that she, and her lovely money, will never leave and so plans are made to ensnare both Madelene and Benedict in a web of lies. Benedict’s past comes back to haunt him with a wallop that makes him revert back to being an injured party. Bad boy, Benedict. On the other hand, Madelene refuses to let him off the hook for not only doubting her but more importantly for refusing to see why she’s doing what she’s doing and for being determined, just like everyone else in her family, that she’ll stay shy, biddable and meek. If that’s who he wants, he doesn’t want the person she’s trying to be and she’ll have none of him. Madelene has finally stood up to someone, though with heartbreaking results.

Again it’s Cousin Henry to the rescue. Did I mention I love Cousin Henry. I do, I do. The way to their HEA is quiet at first, fittingly for two people who shun the limelight. Then it blazes for all of London to see and applaud even as the villains publicly get their just desserts. Brava, Madelene, you have become the person you wished to be and also found a man who loves you exactly that way. This is a sweet story that gains strength as it goes even while enticing me, and yes, it’s worked, to read the next installment. B