What Willaful’s Been Reading and Listening To, Winter 2015

This is a selected list rather than my entire reading; if I included every Harlequin Presents I read over the last few months, it’d look like I’m on the take. Janine wrote a lovely review of this; I don’t have much to add, except that I’d grade it higher than she did. She wanted more joyous moments, but the ratio felt right to me — the slow growth of attraction and affection was an affecting counterpoint to the comedy/tragedy of errors. I liked that a novella that happens over only three days really seems to take its time, and I especially admired how Grant made it so relatable to modern readers while still keeping the atmosphere of a historical romance. B+

When He Was Bad by Shelly Laurenston and Cynthia Eden 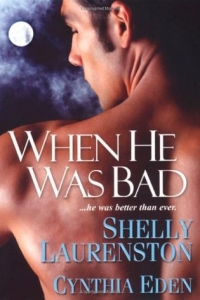 I had previously decided Laurenston wasn’t for me, but my twitter friend Ana recommended this novella as a twist on the usual “fated mates” trope. In this case, wolf shifter Niles “marks” scientist Irene Conridge with his fangs for her own protection, not realizing that all the mumbo jumbo about marking creating mate bonds is not just old wolves tales. Niles has had a thing for the brilliant and anti-social Irene for years, but after she informs him that she finds “the whole passing back and forth of bodily fluids repulsive,” he knows when he’s licked. But then he marks her (against her will) and discovers he can no longer get interested in another woman — and Irene discovers that with this one annoying person, bodily fluids can be pretty fun.

Set in 1984, “Miss Congeniality” is a throwback adventure with Soviet Spies and ancient PCs. Like many shifter stories, it’s sometimes violent and grisly, and there’s some sex with Niles in wolf form which I could’ve done without. I was a little uncomfortable with how Irene is treated; she’s fairly obviously an autistic stereotype, and she’s pushed (and biologically forced) to change; her harassment is played for laughs, which bothered me. But I liked the author’s lively voice, and the way Niles is a typical overbearing romance alpha in a very cheeky way. (He likes to sneak framed pictures of himself onto Irene’s furniture.) C+

There’s a second shifter novella by Cynthia Eden in this book, but it seemed to be primarily lust-based and I couldn’t get into it. 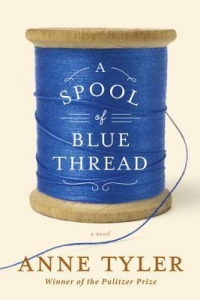 A Spool of Blue Thread by Anne Tyler

I’ve read every book Tyler’s published, usually with great pleasure, usually more than once, and some (The Accidental Tourist, Saint Maybe, The Clock Winder) more times than I can count. It’s really sad for me to DNF one of her books, but I simply can’t get interested in this rambling family history. After reading over 100 pages and still not being able to figure out what the book was supposed to be about, I called it a day. Actually, I browsed ahead a bit to see if anything ever happened, and discovered that much of the rest of the book took place in the past, and wasn’t even about the characters I’d been mildly interested in, which made me sure I’d made the right choice. DNF

This Shattered World by Amie Kaufman and Meagan Spooner. Audiobook 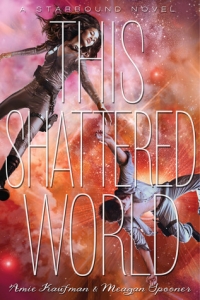 romance. Jubilee — Lee — Chase is a tough as nails soldier, one of those who maintain order on the troubled colony of Avon. Flynn Cormac is one of the rebels she’s supposed to keep in line; he’s fighting for negotiation and peaceful resolutions, while his people want violent action. But as you might guess, there’s far more going on on Avon than anyone understands. There’s nothing particularly original about this story, but it’s all well done, and I appreciated that the two main characters are both equally strong, capable, and vulnerable in their own ways. And yay for a YA book with a person of color on the cover. (Lee was orphaned very young and, IIRC, she doesn’t know her exact racial heritage other than that her mother was Chinese, but she is definitely brown skinned.)

There’s enough info to follow the story without having read the first book — which was nice, because I’d forgotten most of the details — but there are some loose ends dangling for another book or two, so it probably makes sense to start at the beginning.

I think I’d have enjoyed the book more in print: the alternating male and female narrators are fine, but there are frequent mystical/dream episodes, told in a whispering monotone, which I found very tedious. C+ for the audiobook/B for the story 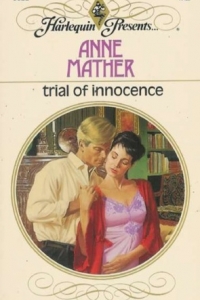 Trial of Innocence by Anne Mather

This older Harlequin Presents was kind of fascinating to read, because it subverted some of my complaints about more recent Presents… in ways that I just hated. For example, the typical HP heroine is an absolutely perfect mom, who always puts her child ahead of everything else. Robyn is a crotchety mom who seems to be always nagging her kid and yelling at him. And far from being the usual sacrificial Mary Sue, she frequently lies to herself and behaves (in my opinion) very immorally. (She sleeps with her finance’s younger brother Jared before her wedding, never tells her husband, and blames Jared for the whole thing.) It could actually be a really interesting portrait of a complex character under stress, but Mather didn’t give it much depth, so Robyn just comes across as very unpleasant.

But I did enjoy seeing a rare heroine who royally screwed up and has to suffer a bit, and the plot turnaround of a (five years) younger hero hero who has always loved her — even if I never could figure out what he saw in her. This is out of print and hasn’t been digitized, but is available at Open Library. C

The Beauty of You by Jennifer Wenn

I sensed fairly early on that this Regency was going to be whatever the opposite of “my jam” is; not only 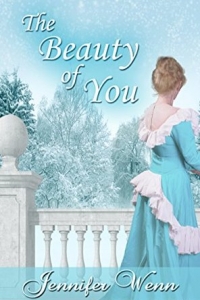 are there crowds of characters from previous books in the series, but the hero is nicknamed Sin and the heroine’s brother-in-law is Rake… I expect a “Devil” will be popping up at some point. I gave it an honest try though, because the plot is quite interesting. Charmaine, a notable ton beauty, deliberately forced Sin into a compromising position so he’d be forced to marry her, much to his bafflement and anger. (SPOILER: Her secret is that her stepfather wouldn’t let anyone marry her, planning somehow to marry her himself.) Their attempts to make their marriage work are complicated by a number of factors, but mainly, it seemed, by Sin being a stubborn ass.

I gave up because in addition to seeming shallow and derivative, the language was driving me up the wall. There’s an overall attempt at a formal tone, which comes off as stilted, and it’s continually disrupted by phrases like “Who was he kidding?,” “you asked for it,” “one measly month,” and “sure you aren’t.” (A sentence in itself.) Readers who love marriage of convenience stories, don’t mind anachronisms, and prefer very short, non-explicit sex scenes might find this worth their time. DNF

I’ve also reviewed Vanilla by Megan Hart, Summer Storm by Joan Wolf, A Clean Break by Keira Andrews, Trade Me by Courtney Milan, and Player Vs. Player by Amelia C. Gormley in 2015.