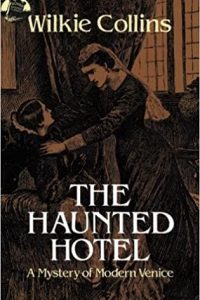 The Haunted Hotel by Wilkie Collins

The story opens with the Countess Narona visiting a doctor in London, and recounting a strange story about her meeting her fiance’s jilted lover. The Countess is supposedly a widow; both her title and widowhood are questioned by society. She travels with her brother, the Baron Rivar, who it’s implied is actually her lover. The Countess is engaged to marry Lord Montbarry, who broke off his engagement to a young lady named Agnes Lockwood after (supposedly) falling under the Countess’ spell when they met abroad.

The action then shifts to Agnes, who is burning Montbarry’s letters to her. She is visited by his brother Henry, who is in love with Agnes. All of Montbarry’s family disapprove of his chosen wife. While Henry is with her, Agnes gets a visit from a young woman who used to be her maid. Emily has married an Italian courier, Ferrari, and she rather inappropriately (she is desperate) asks Agnes to write a recommendation so that Ferrari can get hired as a courier for Montbarry and his bride, who are departing for the continent. Reluctantly, Agnes agrees.

In Venice, Ferrari disappears mysteriously after the newly wedded couple settle in a run down palace. Emily again appeals to Agnes for help in finding out what has happened to her husband. Then, Lord Montbarry dies, ostensibly of bronchitis. There are nasty rumors about the life insurance policy that the Countess and her brother can now collect on, but there is no firm evidence that Montbarry died of anything other than natural causes.

The palace ends up being refurbished into a fancy hotel, and…because reasons, the new baron Montbarry, his family, Henry (still in love with Agnes) and Agnes herself all travel to Venice and stay there. From then on the family and Agnes experience haunting encounters with an entity that seems to be the former Lord Montbarry. The Countess Narona turns up again in Venice, and the truth comes out about what happened to the erstwhile baron and to Ferrari. The story held my attention, and while again, not being really scary, managed to effectively convey a sense of dread. I gave this a B+/B. 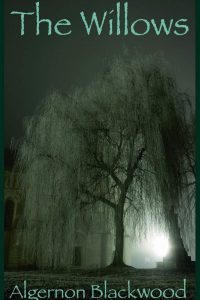 The Willows by Algernon Blackwood

The Willows was my second scary Halloween read; it was even shorter than The Haunted Hotel, only about 20,000 words. It’s a simple yet atmospheric tale told from the perspective of a man who is traveling with a companion on the River Danube by canoe. They become stranded on a small island, becoming smaller all the time as the river encroaches. Meanwhile, nature, particularly the omnipresent willows, takes on a sinister aspect and the pair spend two nights increasingly menaced by unknown entities, strange sounds, and a seemingly shifting landscape. Their canoe is sabotaged, and there are other strange occurrences that make them realize that they aren’t alone and that perhaps they are somehow stuck in a place with a connection to another dimension. Blackwood was supposedly admired by H.P. Lovecraft, and there is a whiff of the eldritch about the story. Oddly, it also reminds me of The Blair Witch Project a bit. I gave The Willows a B+. 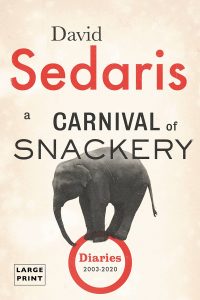 Carnival of Snackery by David Sedaris

I read and reviewed Sedaris’s first collection of diary entries, Theft by Finding (which covered 1977 to 2002) in 2017, and didn’t love it. The second half of that book, where Sedaris’ voice and humor began to take center stage, was better than the depressing first half, and I gave it an B- overall. I expected all along that this collection, covering 2003 to 2020, to be more compelling, and it was. It was interesting to read about current events of the past two decades in real time in these entries. Also, recollections about his family, particularly Sedaris’ contentious relationship with his difficult father, were moving. But mostly I really do love his sense of humor, which often leans towards the inappropriate, as when he visits Bucharest:

Ioana named a neighborhood she tries to avoid, saying that it was dangerous “That’s where you go to see fights and angry orphans.”

Then what are we doing sitting here? I wondered.

The short nature of diary entries made this very readable; I gave it an A-. 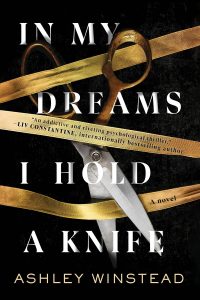 In My Dreams I Hold a Knife by Ashley Winste

I really like suspense books that feature a group of friends reuniting. In My Dreams I Hold a Knife has a lot of parallels to a book I read earlier in 2021, The Girls are All So Nice Here. Both books feature a protagonist going back to her college reunion and confronting a Very Bad Thing that happened during her time in school, and both are split between past and present day. In The Girls are All So Nice Here, the unlikability of the protagonist and the darkness of the book brought the grade down a bit for me. Jessica, the protagonist of this book, is far from being a heroine, but she’s a little more relatable and a little less monstrous, so I mostly sympathized with her as events come to a head at her 10-year college reunion.

Jessica was part of a group of seven who became incredibly tight friends in their freshman year in college after they participate in a legendary prank against a rival dorm. Even back then, within the septet, there were secrets and lies beneath the surface. But when one of the group, Heather, is murdered, and her boyfriend, also a member of the group, is accused, everything falls apart. Jessica loses her own boyfriend, the ultra perfect, ultra rich trophy she had dreamed of more than she wanted. Insult is added to injury when he goes on to marry a classmate that Jessica hates. Now, a decade after graduation, Jessica is determined to return triumphant – with professional success and a DGAF attitude about the fact that her best friend is now engaged to the boy that Jessica was secretly cheating on her boyfriend with all those years ago.

This checked most of my boxes for this subgenre – super-readable, twisty, interesting setting. It does fall down a bit on the characters, who could be better rounded. Poor, dead Heather was one of the more interesting ones, especially in light of revelations late in the book. I gave this a B+, on the strength of readability, a decent plot and good prose. 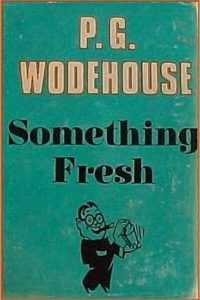 Something Fresh by P.G. Wodehouse

This is my second Wodehouse book (I read one of the Jeeves and Wooster books years ago, and liked it). It features British and American characters coming together in a British castle and highlights the foibles of the aristocracy through the accidental theft of a valuable scarab by the absent-minded (actually “absent-minded” is being generous; he may have been missing a brain stem) Earl of Emsworth. The owner is an American millionaire and collector who is anxious to get his scarab back without offending anyone; his daughter is engaged to marry the Earl’s son.

Teaming up to retrieve the scarab are two Americans who meet because they lodge in the same boarding house. Joan happens to be a friend of the young woman who has become engaged; she travels to Blandings Castle in the guise of a maid, as her friend has offered her a great reward for stealing the scarab back. (Joan also has a connection to the dim-witted groom-to-be.) Ashe is an unhappy writer of cheap detective novels; he answers an ad from the scarab’s original owner, who also promises a large reward for retrieving his scarab. Ashe poses as the millionaire’s valet.

Rounding out the cast are the Earl’s secretary, who means to thwart any attempt to steal the scarab back, a sleazy detective blackmailing one of the characters, and another suitor for the bride-to-be. It’s all very madcap, light and fun, with the sort of dithery English upper-class twits (apologies to Monty Python) that I find entertaining:

“One of the King Georges of England–I forget which–once said that a certain number of hours’ sleep each night–I cannot recall at the moment how many–made a man something, which for the time being has slipped my memory.”

I gave Something Fresh a B+. 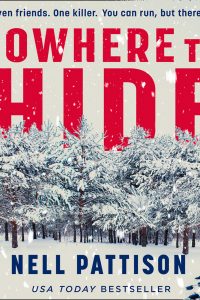 Nowhere to Hide by Nell Pattinson

I thought this was going to be another one of those “friends get together and someone dies”, but it’s actually a group gathering on Christmas at a nature reserve who are tangentially related by their interest in…nature reserves, I guess? (Sorry, city girl here.) Oh, I remember, they are bird watchers and there is some scheduled murmuration (I love that word!) that they want to witness. Except that no one is really there for the murmuration (well, maybe one character and that’s the one that dies first). I probably won’t say much more because I don’t have much nice to say – most of the characters were unlikable;the only likable one was a PoC who ended up being a criminal, which felt icky to me. Several of the twists were quite clearly telegraphed. The final twist was batshit, and not in a good way. I need to figure out a way to avoid these suspense books with very dark endings, because that’s not something I really enjoy. My grade for Nowhere to Hide is a C-.