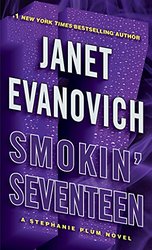 I’m slowly getting caught up on this series – probably three times a year, I finish one book and want my next one to be something really easy and mindless. That’s when I turn to the Stephanie Plum series. They are the opposite of taxing, and every book is pretty much like the last one. I know that all sounds like an indictment, but as I said, a few times a year that’s exactly what I want. This entry was notable, at least, for having some Stephanie/Ranger action, which was welcome since with one exception (I think) their relationship is all just teasing/foreplay and I get tired of that. (To the degree that I have a team, which isn’t a very high degree at this point, I’m Team Ranger.) I could summarize the plot here but if you’ve read one you’ve read them all: Stephanie’s cars get blown up, her grandmother acts inappropriately at a funeral, Lula is sassy, people want to kill Stephanie, she’s a terrible bounty hunter, yada yada yada. I guessed the identity of Stephanie’s creepy stalker early on, but that didn’t so much disappoint me as make me feel clever for figuring it out (probably I shouldn’t have; it was pretty easy to figure out). I’d give this one a B. I’m sure I’ll be returning for the eighteenth book in a couple of months. 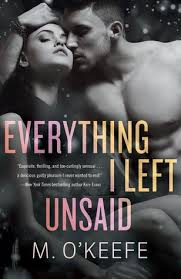 Everything I Left Unsaid by M O’Keefe

I picked this up at Janine’s, and seemingly everyone else’s, glowing recommendation. It didn’t work for me as well as it did other readers. There were definitely aspects I liked – Annie was an intriguing heroine who was worth rooting for, and the writing was good. But I had a huge problem with Annie getting involved with Dylan given the fact that she was on the run from an abusive man. It just didn’t make sense to me – she was so wary and careful (with good reason) but still she’s having almost immediate phone sex with a total stranger? I ended up feeling annoyed with her because it seemed to show extraordinarily poor judgment (even more so when she knows more about Dylan and realizes that he’s got a record). I ended up feeling like Everything I Left Unsaid tried to break away from romance cliches but was inexorably drawn back to them; the theme of the good girl reforming the bad boy was strong in this one.  Still, I liked it enough (or at least found it compelling enough) to start the sequel right after finishing it, and I gave it a B.

The Truth About Him by M O’Keefe

This was a continuation of the story from Dylan’s POV (well, both books are from both characters’ POV, but Everything I Left Unsaid is Annie-first person and Dylan-third person, and The Truth About Him is the opposite). Janine reviewed The Truth About Him here. I honestly think the two books can be read as one longer story since the plot of the second is just a continuation of the first (though the second has more action, external conflict and violence). Dylan is a much less interesting character to me than Annie. It kind of annoyed me to have such a collection-of-romance-cliches hero paired with an unconventional heroine who I thought deserved better. Dylan checks off most of the standard romance hero boxes: brooding, terrible childhood, feels unworthy of the heroine’s love, improbably rich, improbably attractive to women in spite of being supposedly horribly scarred (I felt like the issue of his physical scars was built up in the first book and then ignored in the second). I liked some of the secondary characters a lot better than I did Dylan: Joan, Ben, and the morally ambiguous Tiffany (whom I’m guessing will be paired with Blake in a future book, though I hope I’m wrong; I LOATHED Blake). I ended up giving this one a B too, because it was readable and still somewhat different for all the cliches it hit, and because it had a number of characters I genuinely liked and found interesting. 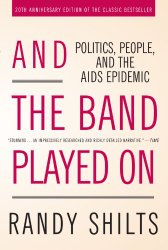 And the Band Played On by Randy Shilts

I lived through the beginning of the AIDS epidemic in San Francisco. I was young, definitely; 13 years old in 1982 when the disease was first given the name AIDS and stories began to appear in the local media with increasing frequency. But San Francisco was the epicenter of the disease and I was from an unusually liberal and politically aware family. My mom had many gay friends (her best friend died of AIDS in 1992) and hanging out in the Castro and going to the Gay Freedom Day Parade were staples of my upbringing. This is all to say that this book interested me in a very personal way as a chronicle (some would say the preeminent chronicle) of the beginning of the AIDS era. Actually, I’m not sure why I didn’t read this before, but I’m glad I got around to it; I ended up learning a lot about the period and the development of the AIDS story that I missed at the time.

The book interweaves three separate storylines: the personal, the political and the medical. The personal was understandably the most moving; the stories of the people who lived with and died of AIDS. The political was predictably infuriating (looking at some of the Amazon reviews, it seems like some people STILL want to argue the fight over closing the bathhouses). The medical story was the one that surprised me somewhat. Not just the actual clinical details (which I did sometimes find hard to follow, but which were well explained). What I wasn’t aware of at the time was all the posturing and jockeying for glory amongst some of the most prominent AIDS researchers, and in retrospect I found this infuriating, as well. People were dying and some researchers wouldn’t cooperate with others because they feared losing the credit for making important discoveries about the disease. Overall, And the Band Played On marks an incredible achievement; a sprawling yet personal record of one of the most important stories of the 20th century. I gave it an A. 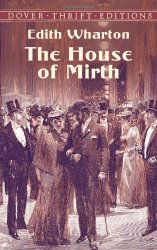 The House of Mirth by Edith Wharton

The only thing I’d previously read by Wharton was Ethan Frome, which has always struck me as being un-Wharton-like in subject, at least from what I know of her work. Though Ethan Frome was pretty grim, I wanted to try her again, and picked The House of Mirth. The story begins with poor doomed Lily Bart on the edges of 1890s New York society; her once-wealthy family was financially ruined when she was a teenager, a calamity that hastened first her father’s death and then her mother’s. Raised to be a beautiful ornament to a wealthy man, Lily is consistently undone by her inability to settle, the small mistakes she makes out of naivete or weakness, and most of all by the fickleness and viciousness of the society she inhabits. It’s a sad story, but it’s so beautifully told that I gave it an A.

→ Jennie
Previous article: Thursday News: Hong Kong banned books, Kindle’s software improvements, superhero sex, and tomato juice at 37,000 feet
Next Post: Friday News: Not even sure how to title this one