When Dear Author decided to take note of Pride Week with posts about essential books in the LGBT romance genre, I knew I wanted to write about contemporaries. Not only are they my favorite subgenre in gay romance, they range across a variety of topics, settings, characterizations and levels of sexual explicitness. I have read mysteries, workplace novels, sports romances, small-town settings, the list goes on and on. But, as we have discussed earlier this week and at many other times, all this variety is partitioned away from mainstream romance, analogous to the way romance is partitioned from other fiction, wholly because of the sexual orientations of the protagonists.

When I read an m/m romance that really resonates with me and that I think is of high quality, I play a mental game: if this book weren’t centrally about a romance between two men and didn’t contain sex scenes between those men (and didn’t have a happy ending), how would it be characterized? In other words, if we didn’t segregate romance generally and m/m romance specifically, and we were talking about this book, where would we locate it? The three books I’m talk about here, I would argue, are very much like books outside the romance genre, and indeed, they would be excellent choices for a “romance conversion kit.” To me they demonstrate that the best books in our genre are of really high quality and the walls that surround it are both unnecessary and artificial. 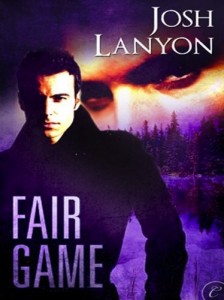 My first book is Fair Game, by Josh Lanyon. This is one of the first dozen or so m/m books I read, the second book I reviewed at Dear Author, and one of my Top 10 reads of 2010. I was immediately taken with the concise, understated writing style. It felt almost effortless to read. This book has remained a favorite, dozens and dozens of novels later. I’m a sucker for grown-up characters, and Elliot and Tucker are both in their thirties, comfortable with their sexuality and their lives. They are estranged, but they still have feelings for each other. When a college student disappears on the campus where Eliot teaches, Tucker shows up in his official capacity and they’re thrown together again. The mystery and the romance unfold in tandem, and the book is exemplary in balancing these two threads.

The campus setting and the academic characterizations are pitch-perfect. The book opens with Elliot teaching his history class and thinking about his students the way they appear on the class roster: Mrachek, Leslie and Sandusky, John. Lanyon had me at that last-name-first detail. And it took me two-thirds of the book before I realized that Eliot was a pretty unreliable narrator. He is so charming and witty that I didn’t twig to the fact that Tucker was actually the more sympathetic character.

The only thing that differentiates Fair Game from well-regarded, mainstream mysteries is that the romance is m/m rather than m/f. It’s a serial killer plot, there are plenty of red herrings, and it’s difficult to figure out whodunit (although when you go back the clues are all there). It needed a slightly longer word count to tie up all the loose ends, but this novel easily holds its own with any medium-gritty mystery of similar length. The romance is really satisfying and the sex scenes, while subtle, are integral to advancing both the plot and the romantic relationship. One of my favorite mystery series is the Charles Paris series by Simon Brett, and Fair Game reminds me of Brett’s books in terms of its wit, humor, and quality of writing. 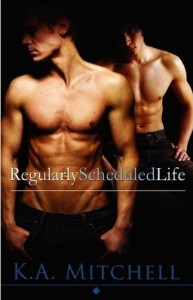 My second book is Regularly Scheduled Life, by K.A. Mitchell, which Joan/Sarah reviewed here at Dear Author. This is a straight (well, not straight) contemporary which employs a storyline we see regularly in literary fiction, what I term the “before and after” novel. The author introduces characters who are leading contented, somewhat predictable lives, and then something exogenous to their relationship occurs that upends those lives and introduces change and uncertainty. In this case, Sean and Kyle have been together six years and are still crazy about each other. When Sean is injured in a school shooting, there’s no question for either man that their relationship is strong enough to withstand the shock. But even though they both still love each other, the aftermath of the shooting and the different ways in which each reacts to the changes that ensue slowly drive them apart. There’s no bad guy in this (okay, there’s Sean’s PR guy, Brandt, I hated him with a passion); instead, the ways in which Sean and Kyle are unable to resolve their conflicts feels organic and painfully familiar, and while there is ultimately a happy ending, it takes them a lot of work to get there.

Unlike Fair Game, Regularly Scheduled Life has a ton of torrid sex scenes (and a few emotionally uncomfortable ones). But these scenes are crucial to understanding Sean, Kyle, and their relationship. Sex is an incredibly important part of their life together, it’s one of the key ways in which they communicate, and it reflects their good times and not-so-good times. You can’t remove those scenes and still have the same book. This aspect makes my mental exercise a bit more difficult to pull off, because there aren’t many literary or mainstream works of fiction where the sex is as frequent or as explicit (never mind the same-sex issue). But if we didn’t segregate by heat level (which is a whole different conversation), this book would sit squarely next to novels like Before and After, by Rosellen Brown (which was made into a film starring Meryl Streep and Liam Neeson). 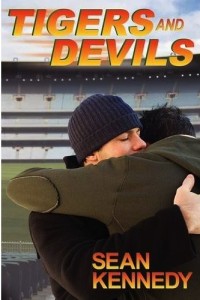 My third book is Tigers and Devils, by Sean Kennedy. I found this book in a list of recommended sports-themed m/m romances. I love sports, and this is set in the exotic (to me) world of Australian Rules Football. Simon Murray is the director of a small, well-regarded film festival and a football fanatic. Declan Tyler is a star football player on Simon’s favorite team. Much to Simon and his friends’ surprise, the gorgeous and popular Declan falls in love with Simon (who of course falls in love right back). In the course of the book, Declan comes out of the closet with all the ramifications you can imagine. The course of their relationship does not run smoothly, but there is a happy ending and a lot of fun scenes involving football (both players and fans).

I’ve described Tigers and Devils to other readers as Nick Hornby meets Shaun of the Dead, not because there are zombies (that’s a different Sean Kennedy book!), but because the novel combines Hornby’s keen insights about men with an understanding of the importance of friendship and community. Both Simon and Declan are embedded in strong networks of friends and family, and part of the pleasure of the book is watching how they relate to each other’s networks. It feels very authentic, unlike so many romances in which the protagonists are isolated from others.

This book is the most uneven of the three in terms of technical proficiency; it drags a bit in the middle, and it would have been much stronger had it been about 25 percent shorter. But the first half of the novel is just amazing, as good as anything you’ll read in romance or mainstream fiction, and it is well worth persevering to the end. When I first read it, I couldn’t stop saying to myself (both internally and out loud), “I can’t believe how good this is.” Kennedy’s voice in this book is the kind that authors dream of having and readers dream of finding; it swept me into the story and made me fall in love with everything about it. There are no tricks or manipulations, despite the potentially sensational nature of the plot, just people you care about and are sorry to let go when the book ends.

There are many other good contemporary novels within gay romance, but these are special to me because together they represent the range and quality that readers can find in the genre today. They’re imaginative, well written, rewarding reads, and they can hold their own with any fiction out there. When I compare them to mainstream fiction, I do not intend to suggest that they are somehow different from other romance novels and more like non-romance fiction. Instead, I’m thinking of what Gloria Steinem said when she turned 50 and someone tried to compliment her by suggesting she looked younger than her age. Her response: “This is what 50 looks like.” These books are what good romance looks like.

→ Sunita
Previous article: PRIDE WEEK: Friday Film Review: If These Walls Could Talk 2
Next Post: REVIEW: Hour of the Lion by Cherise Sinclair