We start with a quiz that was entirely inspired by Linda Holmes’ Television Pop Quiz on Pop Culture Happy Hour. Sarah challenges Jane to identify which book description is an actual book. Jane does abominably well – five correct, two wrong.

Then we tackle reader mail. AWESOME reader mail. Or listener mail? Either way, you wrote, we respond. We talk about a whole assortment of topics thanks to your way-too-interesting email messages.

A word about the sound. You might notice that Jane sounds a bit different. I could try to say that we had some technical difficulties, but the truth is, I threw her down a well and made her record from the murky depths under the bucket. She knows why.

And we have a special addition to the podcast entry this week!

One of the email messages we answered was from Kathryn, who wanted to know why Lauren Willig’s Pink Carnation series isn’t shelved in romance:

I find them the perfect mix of romance, humor, suspense, and time jumping that I marathoned all of them from the library.

So my question is this, why are those books not shelved in the romance section? This may have changed in the last few years, but when I was looking for her books at B&N when I first got into her I had to ask a shop attendent where they were after I failed to find them in the romance section. Lets be honest here, the series is giant interconnected group of historical romance and I just don’t understand why her books are shelved in the Fiction section.

While I was editing, by coincidence I received an email from Willig herself about something entirely different. I asked if her ears were burning and told her about Kathryn’s email and how we’d answered it on the podcast. She responded by saying that she had quite a story about the eventual arrival of the Pink Carnation series in the Fiction section – and then wrote the whole (hilarious) story out for us.

So, as a special addition to the podcast entry, I present, Lauren Willig:

When I wrote my first (publishable) book, the book that became The Secret History of the Pink Carnation, I was pretty sure that I was writing a romance novel.

The working title was A Rogue of One’s Own, because everyone knows that every good Regency romance needs either a rake or a rogue.  I went with the latter because I really didn’t want to spend years fielding inquiries about garden implements.

On my first phone call with my brand new agent, I burbled about the book being in the tradition of Julia Quinn and Amanda Quick, and could we please, pretty please, shop the manuscript to Avon?  Visions of mass market paperbacks danced in my head.

“I’m not entirely sure you’ve written what you’ve think you’ve written,” came the voice of my new agent across the line.  “Let me try something else first….”

As a first time author, these were the words I used most frequently.  Also, I had coffee dripping off the end of my nose, which tends to be a bit distracting.

(To explain:  at the time of this phone call, I had just returned to Cambridge, the U.S. one, after a year abroad in England, and was engaged in trying to figure out the workings of the coffee maker that had been bequeathed to me by my German subletter.  Since technology and I don’t get along, this had resulted in a rather dramatic caffeine explosion, just as the phone rang.  I conducted my first conversation with my new agent with coffee matted in my hair, dripping down my arm, and liberally bespeckling the phone.  Note to self: coffee should not be taken topically.)

In any event, one month later my agent called me back to tell me that a prestigious hardcover house was making an offer—but not as a romance.  “You’ve invented a new genre!” he said.  “Historical chick lit!”

Once I’d adjusted my jaw, I took the sage advice of Ghostbusters: when a publishing house tells you you’ve invented a genre, you say yes.  Even if you have no idea what they’re talking about.

This was, after all, 2003, when chick lit reigned and new subgenres of chick lit were being discovered on a more or less daily basis: lad lit, mommy lit, second cousin once removed lit.  Just add “lit” and stir.

Plans proceeded apace for the publication of the book, now re-named The Secret History of the Pink Carnation, because A Rogue of One’s Own was too romance-y.  (There was a brief, awful phase where it was almost named Eloise Kelly and the Secret History of the Pink Carnation, but, fortunately, that didn’t fit on the cover, so it got nixed.) It was going to be published in hardcover, as Fiction & Literature, with a chick lit cover featuring a modern woman in a Burberry jacket with a very cute bag.  I had nightmares about readers opening it, finding themselves in the Regency, and demanding their money back.

“Whatever you do, don’t call it romance!” I was told.  “It’s historical chick lit.”

Then, overnight, chick lit died.  RIP.  Within two days, my publisher had come up with a new, historical cover (and I breathed a very deep sigh of relief).  Just about to go on my first ever book publicity junket, I was warned, “Whatever you do, don’t call it chick lit!  It’s historical fiction.  Got that?  Historical fiction.”

I’d gone through three different genres without re-writing a word.

Meanwhile, the book hit the shelves, followed by sequels, and the genre confusion continued.  I was adopted by the mystery community, who informed me that what I was really writing were historical mysteries, and why wasn’t I being shelved in mystery, where I belonged?  Friendly Borders reps told me that my covers were all wrong and I needed something that correctly represented the spirit of the books.  What would that be? I asked.  They didn’t know either.  In the absence of consensus, the books went into that great catch-all category on the shelves: Fiction & Literature.

I just went on playing genre stew, writing what I was writing, going to everyone’s conferences, and hoping that someone would eventually figure out where on earth to shelve me.

This went on until 2009, when the market tanked, e-books took off, and suddenly romance was outselling other genres.  After years of being told, “Stop calling your books romance!”, the world had come full circle.  I got another one of those phone calls: the first Pink book was going to be reprinted in mass market—huzzah!—with a romance cover.  And, by the way, did I realize I’d been writing romance?

There was just one slight hitch.  None of the major retailers would shelve it in the romance section.

Ironic, isn’t it?  Apparently, once a book has been shelved in a certain section, it’s against store policy to move it to another.  Ditto any books in the same series.  The book that I had initially written as a romance was finally being printed as a romance—but it couldn’t go in the romance section.  The mass market copy found itself incongruously wedged on the Fiction & Literature shelf next to its hardcover and trade paperback siblings.

That’s publishing for you.

As to what my books really are… I have no idea.  I’ll leave it to you to decide.  (Although I’m fairly certain that they’re not Sci Fi.  At least, not yet.)

I keep telling myself that one of these days I’m going to write a book that’s incontrovertibly in one genre or another: a contemporary romance or a whodunit.  One of these days.

My first non-Pink book, The Ashford Affair, which comes out this April, is a women’s fiction/historical fiction hybrid with a mystery component, set in three different time periods on three different continents….  Let the shelving confusion begin!

AND, as a special bonus, I have the original cover, as well, provided by Lauren: 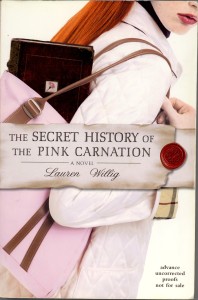 The books we discuss in this week’s podcast include

The music this week was provided by Sassy Outwater, and the track is called Pro Terezku (Reels) by Dún an Doras. You can find them on MySpace and at iTunes.

If you like the Podcast, you can subscribe to our feed, or find us at iTunes. You can also find us at PodcastPickle.

You can email us at [email protected], or you can call and leave us a message at our Google voice number: 201-371-DBSA. Please don’t forget to give us a name and where you’re calling from so we can work your message into our next podcast.

→ Jane
Previous article: REVIEW: Back to the Good Fortune Diner by Vicki Essex
Next Post: REVIEW: Sweet Tea for Two by Genell Dellin