REVIEW: Yours for the Night by Jasmine Haynes 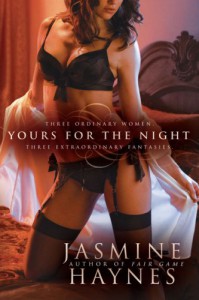 Dr. Brooke Magnati has come out as the face behind the prostitute Belle Du Jour. Dr. Magnati was finishing up her PhD and running low on cash and decided that having sex for money would be a way for her to keep her day job, make ends meet, and presumably have time to herself. Magnati as Belle du Jour wrote a number of bestseling books regarding her life as a prostitute and Showtime has an adaption of this series called Secret Diary of a Call Girl.

Why bring this up? The social messaging of this book is that sexual commerce can be an empowered female concept. Problematically, the stories really don’t play out that way. Instead, as one person mentioned to me, this is Pretty Woman done three ways. Each story in this collection is about a high class courtesan/prostitute/call girl who leaves the empowered life of hooking when a fabulous looking guy who happens to be super rich marries her. A woman is matched with the client. The client pays a fee to the company and the woman gets paid through “tips” or other forms of compensation (jewelry, clothes, etc) if the client is happy with the “date” which is how the agency and call girls refer to the client appointments.

The Girlfriend Experience. This was the weakest and least favorite of the collection primarily because Marianna was so irritating.

Thirty five year old Marianna finds herself in a financial fix when her father won’t give her a loan. Marianna has a good time blaming her problems on her father. After all, he and her mother want her to have a lifestyle that fits their image of wealthy and successful while Marianna would like to be read books to kids and do other good deeds. Unable to be successful in real estate and unable to live a less expensive lifestyle, Marianna is unable to make ends meet. Her girlfriend gives her the idea of becoming an escort. At first, Marianna is aghast, but her friend tells her that not only is it sexy, getting paid for sex, but it’s also powerful.

Okay. "Doesn’t it make you feel sleazy and dirty?" Marianna was dying to know.

The smile was slow to grow on Jewel’s lips, but when it came, it was sexy, sultry, secretive. "Getting paid for it is the hottest thing I’ve ever done, and so damn sexy. This is better than a one-night stand, and you don’t have to worry about how to get rid of him in the morning. Oh my God"-‘Jewel rolled her eyes-‘"if a one-nighter is looking for a relationship . . ." She punctuated with ï¬nger quotes. "If I decide I don’t like a guy, I tell my consultant not to put his calls through."

After his wife died, Chase Ramirez focused all of his attention on raising his daughter. She’s a sophomore in school now and Chase is suffering a bad case of boredom. He exhibits signs of serious depression: ” Yet as hard as it was to get up in the morning, if he didn’t have work to occupy him, he’d simply die. And he needed to stick around for Krista.” Clinically, this would be known as suicidal ideation. Anyway, Chase’s buddy convinces him that he just needs to get laid and provides a number for an exclusive call girl company (Marianna’s in fact!). The idea of buying someone for sex appeals to Chase. The anonymity of it, the immediacy of it, and of course, the transient nature.

In Marianna, Chase finds the perfect antidote for his loneliness. Bonus, even his daughter likes her.

Payback. This was the best of the collection because it actually takes some time to explore both the positive and negative sides of sex and commerce.

Dominique Lowe is a long time contractor with the call girl agency.    She was once the perfect wife of a wealthy man until she found out she couldn’t have children.   Edward, her ex, cheated on her, impregnated a young woman, divorced Dominique and married the pregnant girl.   Dominique was humiliated and hurt.   Making men pay for sex was one way in which she enacted revenge against her ex.

At a party, Gabriel Price watches an interesting tableau play out across the room. A woman encounters a younger pregnant woman and an older man comes and ushers the young pregnant woman away.   The woman, Gabrielle, is hurt and vulnerable and this appeals to Gabriel.

Gabriel and Dominique engage in a torrid limo encounter after which Dominique hands him her card and suggests that he call up and ask for a date, through her agency. Dominique is encouraged to date Gabriel without the agency involvement but Dominique is adamant that she is only in control through the agency set up:

"I’m a courtesan, Isabel. I can’t go back to a normal life with a normal relationship. I like the power too much. And a man is never going to accept what I do for a living. You know it as well as I do." She snapped her purse closed as if that solidiï¬ed her decision on the matter. "He pays like everyone else does."

Dominique’s post divorce identity was so strongly wrapped up in her work.

When she was with Gabriel, Edward ceased to exist. No other man had done that. Not the sheik with his thirty-thousand-dollar gift. Not Trevor with ten thousand dollars or diamonds and emeralds. No amount of money, no present, made her forget. It only gave her power when she imagined showing Edward her worth to other men.

Gabriel made her powerful without the symbol.

Unfortunately, Dominique was sure that Gabriel was just fascinated by her because she was something new and shiny to him and repeated engagements would wear down the novelty. While Gabriel would like to pursue something more meaningful, Dominique keeps trying to return it to a business transaction. She finally comes to the realization that no amount of money or perceived power will restore her and that with Gabriel, she has the opportunity to move forward.

Triple Play. This story is the most outre of the collection. Noelle St. James is kind of a sex addict. She loves sex, all kinds of it, with all kinds of people. Courtesans provides her an opportunity to get paid for doing something she craves. Lately though, something is missing. Like an adrenaline junky looking for her next fix by taking on increasingly risky adventures, Noelle is no longer satisfied by her “dates.”

Fortunately, Dax Deacon arrives on the scene. Dax has a fetish that ordinary dating can’t fulfill. He loves to watch. Recognizing that most women won’t enjoy being constantly asked to have sex with others, Dax has turned to the professional sex trade and in Noelle, he finds the perfect partner. Nearly every fantasy that he can dream up, Noelle wants to act out. In this, they find the perfect partnership.

One thing I did like was that all the characters are older. The heroes are in their forties and the heroines are late 30s to late 40s. There aren’t too many books that feature protagonists over forty and this collection makes a good case that older doesn’t mean less sexy.

The sex scenes in the story are well done and the book is as hot as you’ve ever written. So long as the reader totally focuses on the fantasy, these stories are both romantic and sexy. I never did, however, buy into the idea that getting paid for sex, particularly in the manner that these women were paid, was empowering at all. Being a courtesan in the historical time period was empowering because it was one of the only ways a woman could be truly independent. In modern times, however, I have a hard time believing in this fantasy, no matter how convincing the pen of the storyteller. C+