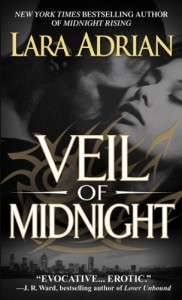 I have to confess that I like the longer wait between your books. In part because some of the past stories, particularly Lucan’s and Tegan’s, wherein the heroes tended to overshadow those around them. This can linger beyond the story. When I picked up Veil of Midnight, enough time had passed that I felt new to the world of the Breeds and the power of the others’ stories had faded.

Veil of Midnight features Nikolai, described as a "combat-lving adrenaline junkie" and Renata, a Breedmate with a powerful gift. Nikolai is sent to Montreal to make contact with Sergei Yakut, a Gen One vampire. Gen One vampires across the world have been the subject of assignation attempts. Most have been successful and Nikolai’s Order is reaching out to gather up a coalition to fight those behind the assignation attempts.

Sergei Yakut is law unto himself and he does not need any protection or alliances to fight off the Gen One killers. He has his own bodyguards including a human female, Renata, who is also a Breedmate. Breedmates are gifted humans who, by some genetic whim, are specially designed to well, breed with the Breed. Given blood from a Breed, Renata and others like her will heal quickly and live nearly an immortal life span. Renata’s gift is the power to zap a Breed’s mind, causing anything from discomfort to death. Her gift is not without consequences. Every exertion of power is met with an equal psychic reverberation.

Renata is owned by Yakut. She cannot escape him and even if she wanted to, she would not because he holds the one thing of value to Renata, a young girl named Mira. Mira is an oracle whose eyes reflect glimpses of one’s future. Mira has immense value but once she loses her power, will become expendable. Yakut holds Mira to keep Renata in check.

Nikolai is able to make contact with Yakut but soon finds that Yakut is corrupt and grotesque. He would like to wipe Yakut out but is ordered not to. He’s unsure about Renata because a glimpse at Mimi’s eyes shows the Renata and Nikolai locked in a passionate embrace. Events conspire to throw Renata and Nikolai together, but Nikolai’s allegiance to the Order is strained by his growing feelings for Renata.

Renata’s story of abandonment and acquisition by Yakut is emotionally powerful as was the suspense of what would happen to her and Mira; whether the two could ever escape to safety. Nikolai’s desire for Renata was also emotionally compelling. What was not as interesting was the actually culmination of the romance. The transition, particularly for Renata, from cold, efficient bodyguard, to "I love you Nikolai, drink from me" lover was rough and abrupt. While the sex scenes didn’t seem forced, the emotional overlay to them did. It appeared that the growth of the relationship was on super sonic speed and didn’t match the natural develop that the characters’ setup seem to call for. I wished that the story were longer and that the resolution didn’t occur so quickly because the characters seemed to be so vibrant.

I also thought that there were shortcuts taken in the plot. For example, at one point, Nikolai gets in trouble for taking action that was inconsistent with the careful thinker that he appeared to be up to that point. It was easy for the reader to see the negative repercussion of his actions and I wondered why Nikolai wasn’t allowed to realize those as well. We weren’t really led to believe that Nik was a shoot first, think second kind of a guy.

I appreciated that the villains were given backstories so that while their actions were heinous, they were also understandable to some extent. This lent an even greater sense of tragedy to the tale and heightened the emotional stakes. This one is tough to grade because I did feel that so much of the story was gripping but the love story left a lot to be desired. I don’t regret reading this story and I am eager to read the next one due out in May but given the struggles I had with the romance, I am going to give it a C+ although it could easily be a B-.

→ Jane
Previous article: REVIEW: A Man to Rely On by Cindi Myers
Next Post: Romance and the Boundaries of the Self