REVIEW: Transformed into the Frenchman’s Mistress by Barbara Dunlop 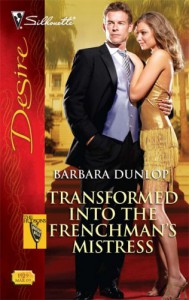 A friend of mine married her Frenchman so when I see books with French heroes, I check them out. Since I’ve found that the Desire line tends towards less assholic heroes, I decided to give “Transformed into the Frenchman’s Mistress” a shot.

If there was anything Charlotte Hudson had learned in her twenty-five years, it was how to be proper. So how had the ambassador’s granddaughter ended up on a wild movie assignment, ensconced in a centuries-old ProvenÃ§al castle with notorious French playboy Alec Montcalm? While her relatives from Hudson Pictures were busy filming at Chateau Montcalm, the real drama was going on behind the antique wooden doors–beneath satin sheets. Charlotte knew their crazy, scandalous secret liaison wouldn’t last. And then she discovered she was pregnant….

This is a hard book for me to grade. There are some things about it I loved and other things that drove me nuts.

Charlotte actually has a backbone and is fairly intelligent. When she arrives at the Montcalm chateau to ask her school pal Raine Montcalm
if her family can rent it for a movie location and finds she’ll have to deal with Alec, with whom she has a slight history, instead, she shifts gears quickly and comes up with a plan of attack. What she agrees to do to get the shoot, isn’t something sleazy. No, all Alec negotiates with her – and I loved the fact that they negotiate instead of Alec going all demanding about it – is that she’ll stay there during the shoot and keep an eye on the production staff.

Alec does have his eye on Charlotte and wants to finish their earlier, unfinished business from three years ago. But he takes his time, is gracious and charming and well mannered about it. Early in the book when Charlotte throws his “playboy” ways in his face, he defends himself by pointing out that a lot of what he does is for the Montcalm business, he doesn’t poach other men’s women and why shouldn’t he enjoy taking out lovely women if they want to be taken out by him? He even dislikes his assistant’s idea that he be seen with Charlotte to deflect attention from the female star of the movie. Hey, I like this guy.

When he and Charlotte start their physical relationship, Alec is determined that she enjoy it, he doesn’t force anything, he’s delighted when she refuses to let him pay for everything during their worldwind – okay more Europewind – buying sprees and together the two are having a great time. Wonderful.

Then they head back to the south of France and things head south with them. Charlotte’s Hollywood mogul family – all from whom she’s estranged though, like a child with her face pressed against the glass of the candy shop, she clearly longs to be a part of it – has arrived and the book turns into an info dump of the previous couple in the series plus a preview of the upcoming attractions. There’s just enough of these other people taking up breathing air to annoy me without enough explanation to make me care at all about what might happen to them.

And – the moment I’d been dreading – Charlotte finally realizes she’s knocked up. Oh noes, she can’t tell Alec! Oh dears, she’ll head off on her own – no worries as she does have money of her own – and have the child by herself. “But you can’t,” Raine and Charlotte’s sister-in-law rightly tell her. So she tells Alec and basically gets called a money grubbing bitch slut by this man who up until now had been charm itself. Talk about a personality 180.

Except that Charlotte’s estranged brother finally acts like a brother and slugs Alec. At which point Alec tells Jake about how Charlotte feels like the redheaded stepchild of the Hudson family which leads to a too sudden reunion between Jake and Charlotte which didn’t satisfy me at all after 22 years of her family’s neglect. Then Alec sees the light because Jake informs him about the family money so – gosh! Charlotte can’t be one of those women who only wants him for his cashola – it must be twue love.

I really wanted to like this book. I really started out liking this book when it centered on a smart heroine and a charming hero but the herd of Hudsons, the incompletely dealt with family issues and Alec’s frankly slightly frightening 0-> 180 trip to bastard and back changed my view. C+

→ Jayne
Previous article: REVIEW: SEALed and Delivered by Jill Monroe
Next Post: For whom should the author write?