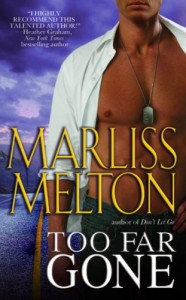 I had read and enjoyed the voice in the first book of yours that I had read and so I was interested in reading the next in the series,  Too Far Gone, which picks up where book 2 left off on a couple of secondary characters.

Mother of three, Ellie Stuart, is struggling to go to school and to raise her boys. She rents a home from Navy SEAL Sean Harlan. Harlan is strongly attracted to Ellie but has a no single mother rule because of Harlan’s committment issues.   He is supposed to be a womanizer who enjoys the strings free relationships he has with several woman. For Ellie’s part, she doesn’t believe that strong, gorgeous and together Navy SEAL Harlan would want anything to do with her.   Her three boys get kidnapped and Sean charges in to help. The story then changes to a road romance as the two set off to find her kids.

Once the two start their search for the kidnapped children, the story started losing me.   Ellie and Sean are suspects by those in authority but are not instructed to stay in the area.   Instead, they are allowed to go off on their own to find the kids.     Additionally, the official mechanism to search for the children was relegated to minority status – so small that it was only there to serve as an impediment to the search and therefore heighten the suspense. The way that this was executed cast a believability problem over the whole story.

My incredulity was further strained by the setup of the antagonists.   There is some association in the South called Centurions. This mysognistic group is behind the kidnapping.   Their mission is to promote the white male supremacy (but by kidnapping poor white boys?).   The Centurion thing felt very manufactured  (even if it was based on a true story although I don’t know that it was). Just the whole name and the over the top evilness of the villain and the “network” that the Centurion’s owned throughout the country that infiltrated every part of aspect of power: business, politics, law enforcement.   It was like the mob only full of white Southern gentleman who wear white suits when they kill you.   The motive behind the kidnapping also seemed specious given that a mysognistic group like the Centurious would be big on on the concept of  progenitor.

I appreciate when the suspense is closely tied to reality because the more likely the danger is, the more scary and suspenseful the story. The further that the suspense book gets from reality or the more that I am required to suspend my disbelief in a romantic suspense, the less engaging the story.   I don’t think it helped that the suspense was further undermined by the fact that nothing convinced me those boys were ever in danger (ala Ransom).   There was danger to Ellie and Sean, but it lacked a feeling of urgency.

The secondary storyline also didn’t work for me because while the reader knows that the runaway teen that Skylar, daughter of a Centurion, meets at a shelter is actually an undercover agent, Skylar only knows him as a, well, runaway teen. Yes, he’s 18 years of age but he appears to be a runaway to her, in need of guidance and love and probably not the lust love that Skylar feels for him. It just felt . . . wrong not deliciously forbidden given that a runaway teen is likely to be emotionally vulnerable.

Finally, I didn’t buy into the idea that Sean’s issues with committment was magically resolved by  seeking out the boys’ kidnapper.   As if wanting to search for them, wanting to return the boys home to their mother, is enough to convince him to overcome his dislike of long term involvement.   Ellie is the best part of the story.   She has had one unfortunate experience in life after another.   Before her kids are taken from her, Ellie was just getting on her feet.   She’s portrayed as this fragile woman with a wellspring of strength that sees everyone through to the final conclusion.   I liked her portrayal as someone who, from her mannerisms, seemed likely to crumble at pressure.   But her whole life has been about survival and providing for her sons.   Her grief at the loss of her boys and her desperate search was genuine and moving.

I can see how this book would appeal to others who view these stories as more escapist fiction.   Because of my desire for romantic suspense to be more realistic, that colored my reading of the book.   Readers who aren’t so tied to realism in romantic suspense would probably find this a good story.     C