REVIEW: To Sin With a Stranger by Kathryn Caskie 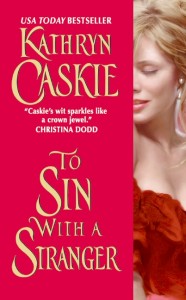 I think the story started off weak for me and never recovered. The setup is one of those with a “hook” to last over seven stories. The Sinclair children, all seven of them, are supposedly so vain, dissolute, greedy, lustful, lazy, envious, etc because their collective nickname is “Seven Deadly Sins”. Their father decides he has had enough and throws them all out. They are allotted a house in London and a small allowance that will provide for them for four years. During that four years, they are to prove they are no longer a disgrace to the Sinclair name.

So, if the Sinclair siblings are so bad, then, I expect this to be some kind of story of redemption. After all, they are name after the cardinal sins. The problem is that the protagonists, well, the whole family just doesn’t seem that bad. The setup is, at best, corny and, at worse, contrived.

In order to live the life they’ve become accustomed, the heir to the Sinclair dukeship, Sterling, takes up prizefighting for money. I’m not sure how prizefighting for money does not equal some kind of degradation, i.e., pride and thus the setup seems at odds with the heroic actions of Sterling as it seems to take some kind of heroism for the elder to be beaten senseless on a regular basis so that his sisters and brothers can keep up their homes.   Further, if greed really was Sterling’s sin, wouldn’t it have evidenced itself in other, dangerous ways?

For example, the only real gambling that Sterling does is a) on the boxing and b) in betting that he can get Miss Isobel Carrington to marry him.   There is no going out and losing his shirt and that of his siblings on some gambling addiction.   The “Greed” aspect is totally made up.   Also, if Sterling was to go to London to make his father proud and he truly was greedy then why wouldn’t he trade his heir to the dukedom for marriage with some wealthy girl?   It was as if the set details were completely separate from the characters themselves.   Inside the chocolate package is vanilla flavored candy masquerading as chocolate.

Isobel Carrington is the only daughter of a House of Commons politician.   She’s a do gooder and makes a practice of interrupting these boxing matches to get contributions for her charity cause, a widows and children’s home.   Her father works to drive a wedge between Sterling and Isobel because of the danger Sterling represents to Minister Carrington’s political aspirations while Sterling’s siblings work to get Sterling and Isobel together to get back into their father’s graces and live their wealthy, indolent lives again.

Another author on Twitter mentioned that she liked razor prose and that’s a good description for me. I like prose to matter, not prose that meanders. The prose in TSWAS seemed so extraneous to me with contrived scene after contrived scene to serve as setups for the next conflict. I.e., a couple of total strangers stop Isobel while she’s shopping to discuss the wager with her. They introduce themselves and proceed to ask her about the wager, whether she’ll be marrying Sterling, and so forth. Isobel doesn’t know what they are talking about. The scene is neither clever nor funny. It shows Isobel as one who is out of touch with society given her ignorance which doesn’t make sense given her father’s political connections. I guess the individual scenes lack continuity with the overall characters of the book. The scenes don’t further understanding of the characters or their actions, but rather serve only to move the plot from point A to point B.

Beyond that there’s a flatness to the characters.   I think it’s primarily because Sterling really wasn’t as bad as the setup painted him and Isobel was so good.   These characters have populated the pages of many a regency romance.   I can see that it will please some because of its delivery of a certain type of book but for those that are looking for depth and difference, this is a pass.   C-.