REVIEW: Til September by Jana Richards 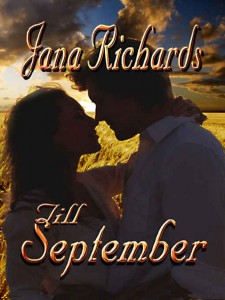 It was the description of this novel which piqued my interest. I mean, how many books are there out there that take place in the prairie province of Saskatchewan? And feature farmers? Not too many, I’m thinking.

Widow Hannah Kramer has decided that turning her house into a bed and breakfast is the way to try and salvage not only the farm she inherited from her late husband but also the one from her parents. Times are hard and agriculture just isn’t paying the bills the way it used to. Hannah despairs that so many of her neighbors are being forced by high debts to sell their land and move so when she, and everyone else, hear that the Golden Oak company is buying up land, she sees red instead of seeing what the company is really trying to do.

Quinn Anderson is immediately attracted to the young widow he helps overcome her fear of heights. Knowing he’s going to be in the area for the summer negotiating farm buyouts, he decides to stay at her B&B and even agrees to help around the place each day. But as time passes and their interest in each other grows, Quinn knows he needs to tell Hannah the truth about himself and try to get her to see that his company is attempting to bring new people into the area. But will he wait too long and lose what he’s unexpectedly found?

I love the way Hannah and Quinn meet. He’s so calm, doesn’t laugh at her fears and even shares his own so that she doesn’t feel as bad about how terrified she is of heights. Their relationship is so easy and comfortable as is Quinn’s with Hannah’s son Ryan. Because Hannah had loved her first husband so much, I hated to see the tired romance trope of sex being so much more spectacular with Quinn than it ever was with Peter.

Hannah sounds like she’s got a business plan for her B&B. She didn’t just pour money into fixing up her in-laws old farmhouse, cross her fingers and hope for the best. She’s also determined to make it on her own and prove to herself, as well as everyone else, that she can do this.

Hannah’s need to do things on her own, to pay her own way, for her business plan to succeed are all great. However, not using her head and assets wisely? That’s dumb. As is her absolute refusal to even consider seeing Golden Oak in a positive light. But I guess she’s already on the defensive from losing so many friends from her life already.

The love of the farmers for their land and for the work they do, backbreaking though it may be, is seen in almost every scene. You’ve got to be dedicated to this lifestyle to keep at it year after year, despite all the hardships and setbacks that will occur. I enjoyed meeting these people and seeing how determined they were to hang on to this life which is so much more than a work day 9-5 job.

But I have to say that the mild part of the book sags. It felt like wheels were spinning endlessly in the mud. “Is he interested? No, he couldn’t be.” “Is she intereste–? No, she couldn’t be.” “I must stay true to my dead husband and all the promises I made to him regardless of whether or not they are practical. Selling out is evil. The Golden Oak people are evil. Living on the land is the only way to be. I can’t sell my parents place. That’s disrespectful.” But I guess Hannah letting the house fall to rack and ruin, the land go fallow, the roof cave in – that’s okay.

And oh, the misunderstandings. Quinn knows that lying is anathema to Hannah, that she won’t be happy when he tells her the truth, that it would ruin any chance of a relationship but he just can’t tell her. More wheel spinning here. Then after Hannah finds out, and it’s obvious of course that she’s going to find out, there’s the big blowup scene. I was surprised that Hannah didn’t find out earlier what with all the comments about how small a community this is and how everyone knows everyone else’s business.

And if farmers who’ve lived on this land for decades, who know it, the area, the weather, etc. can’t make a go of farming, how will a bunch of newcomers survive? Things must be truly horrific for British farmers if these conditions in Canada would be an improvement.

There are parts of the book which I truly enjoyed but I just feel that a lot of the same ground was covered over and over again. The same things said, the same thoughts thought, the same worries, cares and questions dwelt on three, four and seven times. And at the end of each scene of Hannah longing for Quinn, but sure nothing would come of it, I’d read an echo of the refrain, “because he’s only staying until September.” I got the concept and how it relates to the title the first time. I caught it the second time and even by the third I hadn’t forgotten it. It’s too bad that for me the pluses of the book were balanced out by these problems. C+

This book can be purchased at BooksonBoard and other etailers.