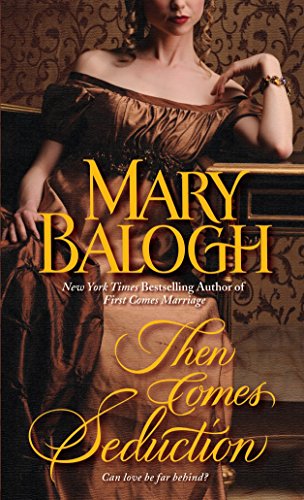 Then Comes Seduction is the second book in the series of stories about the Huxtable family. This book features the youngest sister, Katherine. Jasper Finley, Baron Montford, is the hero. When the two first enter the scene, Jasper is a rogue who makes a sport of women. His sexual pursuits are reknowned.

"Have you not forgotten, Hal? It went into the betting book at White’s on a Monday night with a one-week time limit, and Monty had her on Tuesday and Wednesday and Thursday nights, not to mention the days in between, until he had exhausted them both."

Deciding that there is no challenge with the actresses and courtesans and widows, Jasper and his friends target a virtuous woman. His friends claim that seducing an innocent like Katherine Huxtable who was sheltered, beautiful, well connected, would be impossible. "Only matrimony will tempt females like her." Jasper can’t abide foregoing a challenge and so he sets out to seduce her and because Katherine is sheltered and innocent, she falls easily into Jasper’s hands.

He’s about to despoil her when an attack of conscience comes upon him. He tells her in the crudest and cruelest terms that his attention toward her was all to win a bet and that he’s conceding the bet.

"He cupped her with one palm, his hand between her open, inviting heat and the instrument of her violation.
"Miss Huxtable,’ he said in a voice that sounded shockingly normal, "you are about to cost me several hundred guineas.’"

Jasper is publicly humiliated for being unable to seduce a country mouse and Katherine’s reputation soars considerably. Both, though, do not come away emotionally unscathed.

Three years pass and Katherine is still unmarried.    The two of them are forced to contemplate what marriage is. Jasper thinks as long as they can get along and have good sex, it’s enough. Katherine wants love.

There is nothing qualitatively wrong with this story. I simply did not connect to the characters. I found Jasper unlikeable and Katherine too missish. I was bored with the prattle. I know I was supposed to find Jasper this irrepressible rogue whose self loathing excused his terrible behavior but I found him to be boorish.  He’s constantly making them with Katherine as if the wagers are some kind of joke between the two when it had ruined their lives initially.

The book moves ponderously relying on paragraphs of internal monologues to build to a crescendo. Usually I like these slow moving, thoughtful books but this one lacked interest for me, primarily because I was less than enamoured of the pairing. I think if I had connected better to Katherine and Jasper the story wouldn’t have dragged quite so much. C