REVIEW: Their One and Only by Trista Ann Michaels 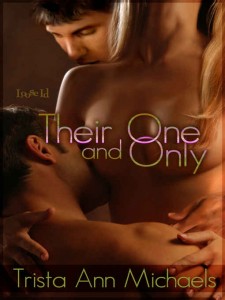 Angela James made me buy this book so blame her for the review. We were chatting on Twitter the other night about twincest, incest, groupcest, and the like. Within the menage ouvre, there does seem to be an awful lot of brothers who enjoy sharing women. In at least one review of a similar book, one commenter suggested this was incest. Given that they don’t have any sexual contact, other than through the woman that they share, I’m not certain that it is incest (and neither was the twitterverse although that could mean we are all deviants with no moral code).

Ms. James suggested that this was a book that dealt with the psychological concept of sharing more than other menage books. When I went to purchase the book at Fictionwise, I noticed right away that it had 508 reader ratings with the great majority of them “Great”, the best ranking Fictionwise offers. The warning includes “This book contains explicit sexual content, graphic language, and situations that some readers may find objectionable: ménage (m/f/m) with twins sharing a partner without being sexually involved with each other…”

Kaycee Alcott is a model who is kidnapped by a serial killer. She manages to escape before anything is done to her. (This was actually a very realistic and suspenseful scene). While she is captured, Sam and Tyler Warren, FBI profilers, are able to locate her through a psychic link developed through a scarf of hers that was dropped at the scene. Sam and Tyler are identical twins and when they both touch something, they can feel, hear and sometimes even see the owner’s immediate experiences.

Sam and Tyler are portrayed as two halves of one whole, separated only by the physical plane. On the spiritual or metaphysical plane which can be reached when both are touching something or someone, they become one being. Because Sam and Tyler live, work, exist in the physical plane, their unity of spirit represents a significant challenge when it comes to being with a woman. To achieve true completion, they would need to share a woman because if Tyler falls in love, Sam does as well.

Tyler is convinced that Kaycee is the one and argues that she should be placed in their protective custody by the FBI while the serial killer is being hunted down. Sam rejects this idea fearing being emotionally at risk again. Tyler wins the argument and Kaycee is taken to their remote ranch in Texas. She finds herself attracted to both men and fairly easily accepts the idea of sharing.

There are problems. I thought part of the prose was rough, particularly the non-erotic scenes. Further, Kaycee does not use a condom during the first sexual act she has with one of the twins. Afterwards, the twin apologizes and Kaycee dismisses this as non important given that she “gets the shot.” I cringed when I read as one twin explained to Kaycee “We’ve shared before. Many times.” and she still thinks condoms are optional.

Sam and Tyler spend a good time debating about how Kaycee is the one. During these arguments, Sam regularly brings up the fact that they have fallen in love before and the other women (plural) haven’t been able to handle the two of them in a long term relationship. The women are good for one night but not for a lifetime. This made it seem like Sam and Tyler spent a good portion of their adult life falling in and out of love and it made Kaycee seem more fortuitous than a true love of either of the men. After all, if all it took was acceptance of the two to make the love circuit whole, any woman could do, not just Kaycee.

The “she’s the one” refrain that Sam and Tyler sang throughout the book diminished in meaning for me given that the “one” really just referred to a woman who they could both share and who would desire them equally. Maybe there really was just one woman, but I would have liked to have seen Kaycee be something more to them that completing the circuit. For the erotic part, I would give it a B+ but the romance and the suspense made it less fulfilling for me. Despite my complaints, I did enjoy the book and Angela James is still in my trust network, spending my dollars on books. C+

This book can be purchased at Fictionwise for $2.98 with micropay rebate.