REVIEW: The Husband She Couldn’t Forget by Carmen Green 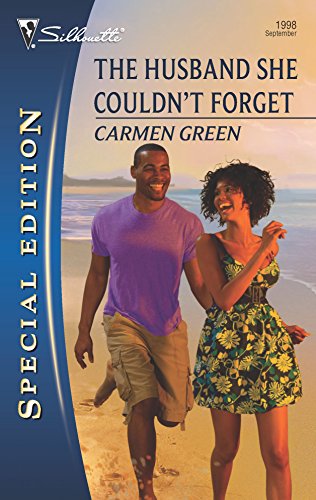 I had heard about your book, The Husband She Couldn’t Forget, back in September and made a mental note to myself to purchase it, partly because I want to encourage more diversity in the genre, and buying a Silhouette Special Edition that features African American protagonists is a good way to do that, and partly because I have a soft spot for amnesia stories.

Unfortunately, like many mental notes I make to myself, this one went astray, and it wasn’t until your book was mentioned again during our recent discussion of cultural appropriation in romance that I bought the book and began to read it.

In the book’s prologue, we are introduced to Melanie Bishop. Melanie is holding a pregnancy test stick bearing negative results when her doorbell rings. She opens the door to be served with divorce papers. Melanie’s husband, Deion, has left her.

Melanie and Deion have been trying for years to have children, without much luck. Deion has done very well in an investment firm, and he and Melanie have all the trappings of success, but the emptiness of their home has made Melanie miserable. Melanie has sacrificed a lot for the marriage, having even cut off her siblings, so she is devastated by Deion’s decision to end their relationship. She tries desperately to get a hold of him so as to plead with him to give her another chance, but when she can’t locate him, she finally signs the divorce papers and leaves their big house in the care of their housekeeper.

When we next meet up with Melanie, some time has passed. She has gone back to using her maiden name, Wysh, and is working as a therapist at the Ryder Rehabilitation and Spinal Center where she is assigned a patient named Rolland Jones.

Rolland suffers from TBI (traumatic brain injury) as a result of a car accident. After twenty days in comatose state, Rolland awakened with a powerful determination to get better. He underwent surgeries and was given a beautiful face, and he worked very hard at his therapy. His condition when Melanie meets him, three months after the accident, is described this way:

His physical recovery had been nothing short of miraculous, except for the resulting symptoms from TBI. He knew how to write alphabetical letters and words, but he couldn’t write numbers anymore. He reversed things, his shoes occasionally, words, which hand to shake with. He had image memories of his past, but not of the past six years. Sometimes things had to be defined for him. He didn’t know his name, his age, but he thought he’d been married. He confused right and left and didn’t have a mental edit button. Whatever he thought came right out of his mouth. He still suffered with balance problems and he sometimes got lost.

It’s not stated exactly what kind of therapist Melanie is, but from what I gathered it seems she is neither a physical therapist nor a psychotherapist. Rather, her job is to prepare Rolland for life in the real world. She is to teach him things like how to use a compass, how to write numbers, and how to cook.

When they meet for the first time, Rolland is quickly smitten. Melanie is the first woman he remembers being attracted to, and he knows that he wants her to be more than his therapist almost from the very beginning. But Melanie, who doesn’t want to lose her job, refuses his advances because he is her patient and because she is afraid to risk her heart a second time.

Gradually it becomes harder and harder for Melanie to resist Rolland’s sweetness and sincerity, and it gets even more difficult when a fire makes the Ryder Center uninhabitable. Most of the patients are transferred to other facilities, but because Rolland is so close to recovering, the Center’s director decides that Rolland and Melanie can stay in his empty summer home while they finish the last three weeks of Rolland’s therapy.

Will Melanie be able to withstand Rolland’s honest and heartfelt declarations of his feelings? What will happen to her if she can’t? And what about Rolland? How will he feel when he discovers his true identity?

Rolland was a wonderful character — caring, trusting, devoted to Melanie, and completely guileless. I loved the way his unedited frankness sometimes made him say embarrassing things, but also revealed how much he cared. Here’s an example, from a scene in which Rolland and Melanie are discussing Melanie’s ex-husband:

“What I should have said is that he didn’t really know you. There’s fire in you. I felt it in your hands the first time you touched me. My arm tingled. I felt it again when we kissed. So if he divorced you, that’s his loss.”

She still looked doubtful and he knew what the other therapists had told him to be true. Only time would make him speak faster and not exhaust him. And only time would make Melanie understand her husband hadn’t been worthy of her love.

I loved Rolland, but I was less keen on Melanie. In most ways she was a nice person, but I feel that the instant she recognized her feelings for Rolland or his for her, she should have asked for Rolland to be assigned to a different therapist. It helped that Melanie at least worried about the ethics of the situation and understood that she was doing something unethical, but I was really uncomfortable when Melanie and Rolland finally had sex, because of the patient/therapist relationship.

In many ways I feel that this is a problem with the book’s premise, but it comes off in a way that makes me less than happy with Melanie’s character, and not entirely sure about Melanie’s happy ending with Rolland. There was also a point in which a neighbor helps Rolland woo Melanie, knowing that the two were patient and therapist, and I wondered what this neighbor was thinking.

Late in the books, there is a discussion of an insider trading investigation and a resulting court case. I’m neither a lawyer nor an SEC investigator so I don’t know if the legal details are accurate, but I was somewhat doubtful when I read the scene.

Some of the dialogue was a bit stilted, but a lot of it was affecting. I really felt for Rolland and sympathized with Melanie’s dilemma, even though I think she should have handled things differently, and I would have liked to see even more fallout from her actions. Had Rolland been any less wonderful, I think I would have been very annoyed with this book, but I liked him enough that I was able to enjoy it despite my problems with Melanie’s ethics.

In the end, my feelings about The Husband She Couldn’t Forget are mixed. C+ for this one.