REVIEW: The Forest of Hands and Teeth by Carrie Ryan 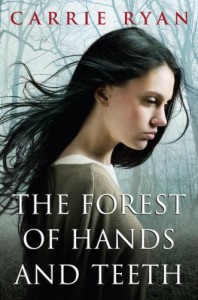 We’ve joked about zombies becoming the new vampire here at Dear Author.   For a while, it seemed like zombies were replacing faeries as the hot paranormal trend.   In fact, I first heard about your debut novel from a publishing deal announcement during one of those waves.   The reason why it stood out in my mind was because of two reasons.   First, I loved the title.   It was so evocative and anyone who’s ever watched a zombie movie can easily extrapolate its origins.   And secondly, your novel was set generations after the zombie apocalypse ruined the world.

Mary lives in a secluded village in the Forest of Hands and Teeth.   It’s a suffocating existence because she’s always dreamed of leaving, walking past the fence that encloses it, and finding the ocean her mother always told her about.   But to leave the village means entering the forest, which is filled with the Unconsecrated — the dead who’ve returned and hunger for human flesh.   Mary knows this better than anyone.   Not too long ago, her father walked into the forest, never to return and her mother’s pined for him ever since.

Because of their isolation and the fact that they may be the last survivors of humanity, the village has a ritualized system of ensuring that the next generation will continue.   It’s a world where commitment and duty are emphasized over love and freedom.   Mary also knows this best of all because while she is in love with Travis, it’s Travis’s brother Harry who wants to marry her.

That all changes when her mother strays too close to the fence and gets bitten by a zombie.   Through a series of misfortunes, Mary finds herself no longer spoken for and turned over into the care of the Sisterhood, a group of women who rule over the village.   What Mary learns and discovers there drives her to make the choice she’s been considering for nearly her entire life: should she stay or should she go?

I love horror movies.   And while I do prefer Asian horror cinema these days, I have a morbid affection for bad, horror B-movies.   Anyone who’s ever watched the SciFi channel on a Saturday will know exactly what kind of horror movies I’m talking about here.   We are talking bad movies.

The Forest of Hands and Teeth is not on that level.   It’s not a bad book by any stretch of the imagination.   That said, I think it didn’t live up to its promise.   In some ways, having watched so many zombie movies might have hurt me.   While I didn’t go in expecting this book to be anything like a movie, I probably did have a few subconscious expectations.   Like the fact I expected that Mary would escape the village earlier in the book and have to survive in a zombie-filled forest.

This, of course, wasn’t the case.   Even so, I wouldn’t have minded that if what was presented instead had been explored more in depth.   I would have loved more about the Sisterhood’s conspiracies, for example.   While it’s true that their fanaticism ties into the book’s themes, I still got the impression much of their purported beliefs were self-serving.   After all, they had the most power in the village due to their knowledge and in a world where civilization has all been wiped out, knowledge truly is power.   What were those secrets they kept so closely guarded?   What was the deal with Gabrielle?   I can draw my own conclusions but it’s nothing definitive.   Or I would have loved exploration into the relationship dynamics between Mary, Cass, Travis, and Harry.   Not necessarily even the love triangle (or rectangle, I guess) because having known each other since childhood, their relationships aren’t completely based in the romantic.

But because neither of those threads was dealt with in a manner I found satisfactory, it wasn’t until the last quarter to a third of the book that I became invested.   I thought that part of the book was the most interesting and I think readers who know their zombie movies will find it the most familiar.   Admittedly, there were some details that made me wonder if they’d been inspired by specific movies (like the baby and the Dawn of the Dead remake).   I suppose that’s the disadvantage of having watched so many.

And since I’m a fantasy reader, my next complaint shouldn’t come as a surprise to anyone who knows me.   I thought the worldbuilding had major inconsistencies.   There’s only so much I’m willing to chalk up to an unreliable narrator and first person narrative filter.   Some things just really did not make sense to me.

For example, the village is surrounded by a fence.   In the novel, we learn it started out small but as the years wore on, the villagers started expanding it.   There a few problems with this.   First, the village’s founders just happened to leave a bunch of wood lying around to expand it to the extent they did?   Second, wood rots.   A wood fence will not last a generation without upkeep and replacement, let alone multiple generations.   Again, this brings us back to the question of where is that wood coming from?   Under normal circumstances, the obvious answer would be the forest but because the forest is filled with ravenous zombies, that answer is no longer so obvious.

And speaking of the founders, they just happened to have chickens and cows when they built the village and fences?   Never mind the fact that they were able to maintain a population to feed them for generations (meaning they had feed, veterinary care, etc), I can’t help but wonder how they even thought of this.   Because when faced with a worldwide crisis of epic proportions, like a zombie plague, I don’t think it’d be inaccurate to say most people wouldn’t plan that far into the future.   They’d be thinking more in the short term.   I know I would.   I’d be more concerned about surviving tomorrow because if I don’t survive tomorrow, how can I help anyone else in the future?

There are other details that bothered me.   People know how to read but don’t know what Roman numerals are?   Photos and newspapers are still perfectly intact generations in the future?   These weren’t artifacts preserved in a museum but items stored in an attic.   What about bugs and beetles?   They love to nibble on old paper.   I know it’s minutiae but it immediately occurred to me when I stumbled across those sections in the text so I like to think it’s not that irrelevant.

Despite my substantial problems with the worldbuilding and pacing, I do think this is an original contribution to the young adult genre.   It’s a more literary take on zombies, which will appeal to readers who shy away from gory zombie movies.   On the other hand, I think the book lacked the focus it needed to emphasize its themes of how fear and self-imposed isolation can cripple your freedom.   And I personally found the final chapter very anti-climatic.   While it does bring some of the irony I’ve come to expect from the horror genre, it did make me question what was the point of it all.   Then again, that might have been the point in and of itself.   C