REVIEW: The Care and Taming of the Rogue by Suzanne Enoch 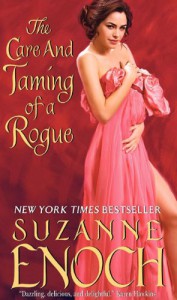 After finishing the previous trilogy which I believe to contain some of the best work of your career, I was delighted when The Care and Taming of the Rogue arrived on my doorstep, ridiculous title notwithstanding. With the adventurer hero, I thought we might be getting something unique again.

While prose in  The Care is a well written, the book lacked the emotional appeal of the previous three. In fact, in writing this review, I found my memory to be totally devoid of this book even though I read it only a week ago. Even the notes that I took failed to jog any emotional response.

Bennett Wolfe is a former adventurer in the Congo. He was thought dead and his journals were stolen by one of his fellow travelers. While he was presumed dead, said fellow traveler, Captain David Langley, published a memoir using Wolfe’s journals and notes and took the opportunity to paint Wolfe in a very unflattering light. Bennett’s uncle, the Marquess of Fennington, has Bennett declared dead so as to take part in the profits of the memoir. Bennett is not dead and shows up in England five months later, pissed off and ready to drive Captain Langley into his own grave.

Bennett is further enraged to discover that the African Association who funded his trip to the Congo is considering Langley’s application; that Bennett is viewed as an unsavory incompetent; and that Langley is being feted for deeds that Bennett himself undertook.

Lady Phillippa is the standard historical romance heroine. She’s the younger, less attractive sister of a society darling. She is interested in books and not interested in the fripperies of the leisured class. She has read all of Bennett Wolfe’s books and knows instantly that Bennett Wolfe did not pen that last memoir. Bennett has a champion in Phillippa and he needs it for in order to get revenge against Captain Langley, Bennett must appear to be sauve, sophisticated, and polished. Essentially he needs to act like Captain Langley.

For all Phillippa (and others) urging, Bennett doesn’t listen. At one point he engages in a fisticuffs with Langley during a party. This further ostracizes him from society and imperils his standing with the African Association.

Bennett is faced with a two pronged dilemma. First, he wants to get back to adventuring and falling in love with Phillippa means settling down in England. Second, he wants to get back at Langley but is at a loss on how to do so (well, not a loss, he just doesn’t want to exert the effort, the self control it would take). Bennett is like a puppy – fun, loveable, but untamed and wont to do naughty things even though he knows full well it will result in some negative consequence.   In some aspects, Bennett is a too stupid to live hero, always acting against his own self interests.

Phillippa, for the most part, is Bennett’s foil. He enjoys spending time with her because she’s read his books and appears genuinely interested in his adventuring while all the other young ladies only want him because of his good looks and celebrity status. Which is to say, Phillippa didn’t seem any more different than the other young ladies. Further, Phillippa supposedly loves adventuring, but everyone, including Phillippa tells Bennett she is not leaving England. Why? It’s not like she likes anyone in society and she clearly loves Bennett’s trips. There was little to hold Phillippa’s interest but, of course, if she wanted to travel that would ruin all the supposed tension between the two and thus leave the book nearly conflict free.

Even though there was this ostensible struggle between Bennett and Langley, there is a whole lot of nothing that happens in this plot thread. Bennett makes no attempts to discover where his original memoirs are. (Phillippa, the adventurer, pushes Bennett into it). Bennett acts like a bloody hot head the whole time, against everyone’s advice making it virtually impossible for him to gain the upper hand. For someone who supposedly is a scholar of human nature, at least as recounted in his memoirs while in the Congo, he fails to exert any of his of that knowledge in London and any diplomatic skills he may have learned have been long forgotten.

Several passages are devoted to setting up the Adventurers’ Club, or, as I like to call it, the Gallery of Future Heroes. The Adventurer’s Club was set up by the Duke of Sommerset for like minded men who hate society and, frankly each other. I view it as the male version of the waiting room. They are all sitting in the cigar smoke filled room, eating, drinking, and waiting for their marriage number to be called. 12, now serving number 12.

This book fell curiously flat for me. It was a quick read and I can see it being entertaining but it’s not a book I would revisit. C+