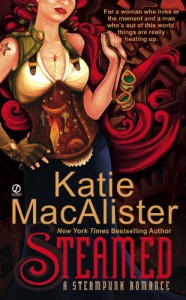 I was excited to read Steamed, mostly because I haven’t found a lot of romance authors making a foray into the subgenre of steampunk and I’m always curious to see how worlds develop. It’s also nice to take a break from vampires, weres and futuristic worlds that have a general tendency to be dystopian. Of course, I’d already made a generalization that the book wouldn’t be as dark as many of the other sci/fi paranormals out there simply because it was a steampunk subgenre . I apologize for that in advance.

Jack Fletcher is some sort of computer technician who’s into steampunk goth bands and has a knack for being in the wrong place at the wrong time but somehow ending up looking like a hero. He’s working in his company’s lab when his sister, Hallie, shows up. Hallie is attempting to set Jack up on a blind date with a woman who has similar interestes as he does. While she’s talking to him, she’s shaking a can of liquid helium (why this wasn’t removed from her immediate vicinity is beyond me). Hallie ends up misaligning the lid of the can, causing an explosion and blowing them to Steampunk Land. Kinda like when Dora and Boots end up in Fairytale Land. Now that I think about it, just like that. I wanted to kill Boots for being an idiot and falling for the witch’s bullshit. Just like I wanted to kill Hallie for being such an unforgivable idiot in a lab. The book nearly met the wall at that moment, but since Hallie wasn’t our heroine, I continued to read.

Octavia Pye is an Aerocorps captain on her maiden voyage, and knows she’s being tested by her crew and has been given a small shipping route until she proves herself to the Corps. The last thing she needs are two stowaways, which could ruin her standing in the Corps, and if she doesn’t handle them correctly, lose the trust and respect she’s trying to earn from her crew. On top of everything, Octavia is a woman with quite a few secrets that she wants to keep from her crew, the stowaways and the Aerocorps.

One of the biggest issues I had with this book is that it’s written in alternating first person, from either Jack or Olivia’s perspective. Chapter breaks  are when  the viewpoint switches, which provides clarity, but first person alternating is probably one of my least favorite ways to read romance.   I feel that this kept me from really getting the chemistry between Jack and Octavia, and there was a serious lack of total physical description other than a few body parts here and there (i.e., Octavia’s red hair and Jack’s eyes are two different colors). I also had issues with both the hero and heroine. Jack is a supposed Quaker who swears, drinks and draws the line at shooting a weapon, but will engage in a fight. I went to a Quaker school, and I know it means more than being a CO, so I found this a bit strange. He’s also a guy who happens to have received a lot of accolades for not a heck of a lot of heroism. He seemed a bit beta, but not capable, adorable beta. Just oblivious beta.

My problems with Octavia are a lot deeper, mostly because the majority of the book is written from her perspective, or at least it felt that way. Octavia doesn’t have a handle on her crew; they swear, make come-ons, question her authority, and blatantly go against orders. Rather than whipping them into shape with a firm but fair hand, she huffs, shrugs, and kinda lets it roll off her back. She has a respectable captaincy in the Aerocorps after 16 years of service, but the feeling I got is that if she couldn’t handle this small shipping run, she’d lose her position. She also has what seem to be an FBI building full of secrets, she’s had liasons with nearly all of the most powerful men in her world, yet she has no standing at all and can’t get anything done on her own. I found that it just didn’t seem to make sense. Then there was this:

“Your mind says no, but your body says yes,” he said, gently, persistently tugging me closer to him.

While this isn’t as bad as “your mouth says no…” it comes pretty damn close. Jack is a borderline letch, and his version of a compliment is not what I find complementary.

Lastly, the steampunk world seems to be an afterthought. Not the steam functionality, or mechanical machines, but rather the actual world. The different (and warring) factions seemed almost cartoonish, making the entire thing feel unstable and very unrealistic. Every time Etienne Briel is mentioned I had an image of Bomb Voyage in my head, rather than Olivier Martinez. Trust me, I kept trying to switch that mental image, but it wasn’t happening. This world wasn’t a punk dystopia, but it didn’t achieve a level of plausiblity at which I could suspend my disbelief and comfortably enter it. C

→ Shuzluva
Previous article: Do authors have ethical responsibilities beyond the book?
Next Post: REVIEW: Archangel’s Kiss by Nalini Singh