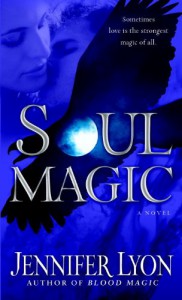 This is a witch/witch hunter paranormal and while witch stories are not proliferous within the paranormal sub genre, the underlying tropes are familiar.   Wing Slayer hunters, men chosen by the Wing Slayer to protect witches, must find their soul mirror or succumb to the rogue state where they live to slaughter witches. This story tries to inject new life into the soul mate saveth trope by placing into question whether love can overcome magical destiny.

Carla is a powerful witch who helps those rescued from cults to overcome brainwashing. She works at a local clinic with her good friend Max, a sociologist (and probably a Wing Slayer to be). Max was a caring, curious sociologist until he was unable to save someone from dying in a cult. Then he became romance hero material: “The curious sociologist in Max died, and this man, full of passion, grief, anger and guilt, was born.” Max is mentioned quite frequently but plays absolutely no role in this book despite having unrequited feelings for Carla. I can only guess that he is to be hero of his own book after suitably suffering enough angst and drama.

Carla was kidnapped by rogues, witch hunters who give into their desire for witch blood, and subsequently saved by Wing Slayer Hunters. Sutton West was one of the Wing Slayer Hunters who was involved in the rescue. Part of Carla’s blood got on Sutton and now he lusts after her.

Someone is taking mortal women, brainwashing them, and turning them into weapons against the Wing Slayer Hunters. Witches are also disappearing. On top of this, Carla’s dead twin is calling for her on the astral plane, a plane where Carla can reach people who are in comas and where Carla can have some sexy encounters with Sutton. I didn’t really understand the bounds of the astral plane but it’s probably unimportant in the larger scheme of things. Carla’s twin’s soul is trapped in a knife and the twin is calling out for Carla to save her.

Sutton has a strong desire for Carla and it becomes apparent that she is his soul mirror, or so they think, when the eagle tattoo on his back begins to respond to her. The problem is that Carla’s twin is reaching out to Sutton (whom she refers to as her Eagle) and Carla doesn’t know whether Carla or her dead twin is Sutton’s soul mirror. Further, if Carla bonds with Sutton, she will lose her connection with her twin. Sutton refuses to accept that Keri, the twin, is his soul mirror because he loves Carla. Sutton, beset by his insecurities about his lack of education and his rough manners, believes that part of Carla’s reluctance to accept him is because he is not good enough for her.

We don’t get to see Sutton fall in love with Carla. He simply is. I wasn’t sure if it was because he was, for all intents and purposes, infected with Carla’s blood because it was only after getting her blood on him that he started wanting her, only her.

Probably the best parts of this book was the interaction between Sutton and the other male Wing Slayer Hunters. They spent the better part of their downtime making fun of each other but when danger arose, they worked as a team.

While I appreciated the message here: that can love be the strongest magic of all, too much is controlled by the “gods”.   Prayer can result in miracles. I have nothing against prayer and the power of people’s faith, but the fact is that when prayer can result in getting around the rules of worldbuilding, it totally deflates the tension. Because I felt like the Wing Slayer could intervene and make changes for the better, I don’t really trust the worldbuilding in the story and I don’t see how I could buy into tension based on that worldbuilding in the future. Worse, I felt that the ending really, really defanged the spirit of the story that the mate bond could be overcome by choice. C

This book can be purchased at Amazon or in ebook format from Sony or other etailers tomorrow, October 27 2009.