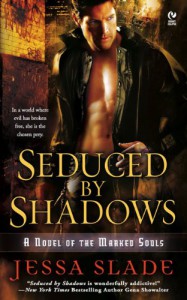 I confess to being reluctant to start this book. I’m not sure why. I think because there wasn’t anything about the description of the book or the cover that really stood out. It was a paranormal story about good demons and bad demons. Given that it was a free book, however, it didn’t hurt to at least read the first chapter. I was intrigued enough by the first chapter to continue given that the writing style appealed to me.

Ferris Archer is a former southern gentleman who is now one of the demon possessed. He and others like him have banded together to fight in the war against other demon possessed individuals and malices that populate the earth. Archer views himself not so much as a warrior, but a trash collector . Malices can be drained but they cannot be returned to hell and over time, just regenerate. To say that Archer is weary would be an understatement. He went from fighting in the Civil War to a non stop, centuries long battle against entities simply cannot be defeated. When others warn him that the battle is being tipped toward the evil, Archer doesn’t believe it. The battle has always be tilted against them. Their numbers are few and seem to be getting fewer all the time. Archer plays the ennui inflicted rebel quite well.

Sara Littlejohn is a thanatologist who suffers a terrible car accident, leaving her maimed and in pain for possibly the rest of her life. She is tempted by a demon in the form of Archer who promises her a pain free life. She invites him into her body in some strange dream sequence. (Archer previously appeared to her telling her, cryptically, to refuse the demon).

Sara’s demon is a rare and powerful kind and she is desirous because, well, I wasn’t quite sure. I think it is because she represents some rare connection to the other side of the Veil which separates Earth from hell.   Sara is being hunted by a djinn who wants to harness that connection.

Sara’s possession is different and there is little explanation why. It just is. There hasn’t been a female possessed in centuries. There’s some whisper of mated-talyan bond but again, no explanation why she is the first in the long line of many demon possessed individuals to be a) female and b) teshuva versus djinn.   Teshuva’s are good demon possessions (if there can be good demon possessions).   Teshuva demons are those who are repentant. Djinn are those demons who are not. Teshuva demons and their possessed gain redemption by dying in battle against the djinn.   The demons appear to be written as male in gender although it is referred to as “it”   in pronoun form.    The  demons, even though they are sentient beings inside the body, have little impact on the characters in the book except through violence.

The extent of the demon possession is not fully explained for me.   Does the teshuva merely lie dormant until called upon? This wouldn’t be accurate since at one point Sara’s powerful demon cowers in the face of a djinn.   But while Sara and Archer have sex, there appears to be no connection or involvement by the demons.

There’s no rhyme or reason for why someone gets a teshuva or djinn, it seems. Is it because the soul is qualitatively good in some fashion? It seems awfully convenient that the good guys get the teshuva’s. Would a truly repentant demon possess a serial killer? Does the demon change their soul?

The style of the prose is engaging but the overall story was confusing and difficult to follow.   There was a tendency toward repetition (I don’t know how many times that Archer referred to himself as taking out the trash but it was too many).    I kind of felt like the romance between Archer and Sara was a default one.   Sara saw Archer first, became physically attracted to him, he helped her through possession and then they were a pair.   I am intrigued and will read the next book in the series, but I left this book with many an unanswered question.   C