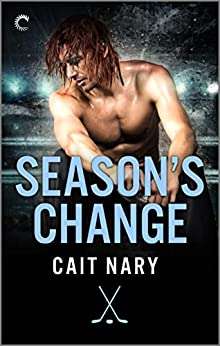 A veteran hockey player and a rookie can’t get away from each other—or their own desires—in this sexy, heartfelt opposites-attract hockey romance.

Olly Järvinen has a long way to go. He’s got a fresh start playing for a new team, but getting his hockey career back on track is going to take more than a change of scenery. He’s got to shut his past out and focus. On the game, not on his rookie roommate and his annoyingly sunny disposition—and annoyingly distracting good looks.

All Benji Bryzinski ever wanted was to play in the big leagues, and he’s not going to waste one single second of his rookie season. Yoga, kale smoothies and guided meditation help keep his head in the game. But his roommate keeps knocking him off track. Maybe it’s just that Olly is a grumpy bastard. Or maybe it’s something else, something Benji doesn’t have a name for yet.

Olly and Benji spend all their time together—on the ice, in the locker room, in their apartment—and ignoring their unspoken feelings isn’t making them go away. Acting on attraction is one thing, but turning a season’s fling into forever would mean facing the past—and redefining the future.

This was a strange book if you ask me. A major plus for me was that the book actually had a lot of hockey in it. I mean, to me that’s how it should be if two main characters are hockey players, but that’s not always what happens. Sometimes a book that features hockey players in it has only a little bit or no actual sport in it. This book has hockey, so I was happy about that. We do see some games shown, training camp, etc. It was nice for me as I like sports being featured in m/m books or any books.

And I liked both main characters a whole lot. As it often happens in romances, both Ollie and Benji did not have it easy before they met and carry some issues/ scars from their past. Benji seems to deal with what he went through a little better because he already embraced the tools that help him do that (therapy, yoga, etc ) and Ollie is not really dealing with his issues yet as the book starts, but he certainly progresses in that as the story moves forward.

I liked that the author chose not to portray the families as all together horrible and Ollie’s dad turned out to be more not knowing how to raise him rather than somebody who was malicious toward his son (still intent did not really change much, but I was glad to see some sense knocked into him).

You may want to know why I called the book strange. Because the relationship arc, which with hockey or without was the main story here, felt that way for me. The first half of the story where they danced around each other was fine and as I said, I liked both boys a lot, so I was willing to see it through, despite Beni’s being so absolutely clueless for probably 75/80 percent of the book, but then it became weird. At the end I felt like I missed several major emotional beats in the story.

The jump from what I call “temporary break up” to ‘getting back together forever’ was too sudden, from Benji just making a discovery about himself and going into probably a permanent relationship for the rest of his life (granted the book did not call it the most permanent relationship, but that’s how it felt). Also I don’t know about you but I prefer the main character realizing a major thing about himself without the help of a friend no matter how kind that friend was.

So, yes, that’s why I used the word strange. I don’t feel like they arrived at the place they should be at the end of the story yet either

→ Sirius
Previous article: REVIEW: What Souls Are Made Of: A Wuthering Heights Remix by Tasha Suri
Next Post: REVIEW: Sorry for Your Loss by Kate Marshall