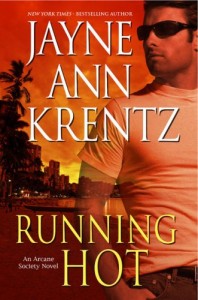 I think that my favorite books of yours are the not the paranormals but since you’ve decided to go all paranormal all the time, I’ve just got to suck it up or stop reading you.    So am sucking it up because apparently you are a drug I just can’t quit.

The premise of this series, as far as I can tell, is that there is a paranormal explanation for anyone who excels at a skill, i.e., Grace Renquist, is a profiler.   She can look at a person’s arua and is able to tell their propesnity for danger, infidelity, truthfulness, and the like.   She’s the paranormal version of the FBI criminal profiler (and I think, under the theory of the world in the book, any skilled profiler would also be somewhat psychic or “sensitive”).

Luther Malone is an aura suppressor.   He’s like a walking, talking antidepressant.   He can disarm people by focusing on the dangerous parts of the psychic’s arua and sending interrupting or disrupting psychic waves.   Like many Krentz heroes, Luther is kind of a non violent guy who doesn’t like guns and so his ability to defuse people without violence is pretty convenient.

The two are set to Maui for by Fallon Jones, the head of Jones & Jones, a low profile psychic investigation agency.   Grace is to profile a psychic by the name of Eubanks who is suspected of murdering someone but Grace and Luther soon see that Fallon has miscalculated this time and sent them into a virtual hornet’s nest of Nightshade operatives. Nightshade is the arch enemy of the Jones group.   Nightshade has created artificially enhanced sensitives, or psychics, through a drug based on the original founder’s formula.   Grace becomes endangered when one particular Nightshade becomes obssessed with her, and not in a good way.

There’s a lot of elaboration on the concept behind sensitives and their correlation between regular folks and those that show some preternatural skill.   We readers learn a bit about opera (one of the Nightshade operatives is an opera singer) which I don’t mind, and a number of other miscellaneous factoids.   One thing that I missed was the particularly witty dialogue that the characters would exchange and the dry humor that is usually a hallmark of Krentz heroes.   There was a little but not a significant amount of either in the story.

I give kudos for having unconventional characters.   Luther is a two time divorcee.   He loves at first sight while Grace takes a little while to recognize that her physical desires are an expression of something more emotional.   I was a little surprised at the speed at which the two jumped into bed together.   The love story relied in some part on the implied idea of destiny/soul mate. I.e, Grace could touch only Luther at first after “running hot” and expending a great deal of psychic power while touching others would give a tremendous physical rejection.

I don’t think you could ever write a bad book, but I did think that this was lacking in some energy or connection, either between myself and the book or between your characters.   I know I’ve responded with more appreciation for past titles.   I bought this at the Sony Store for $11.99 and while I don’t technically regret the purchase because I am such a big Krentz fan, I do think its probably more suited to be a library read at the hardcover price or a paperback purchase.   C+

→ Jane
Previous article: REVIEW: Baby On Board by Lisa Ruff
Next Post: Hachette Group Pulling All Ebook Titles from US Stores