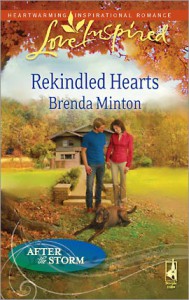 There is a lot of stuff you are trying to cover in this book. Some of it is done just right, some of it is skimmed too quickly for me and some of it just seems to be on an eternal repeating loop.

The small Kansas town of High Plains is still digging out from and attempting to recover from a horrific tornado. Buildings were demolished, possessions were scattered across the county, an unidentified little girl was discovered in the aftermath and town police chief Colt Ridgeway and town vet Lexi Harmon are unsure whether their decision to divorce two years ago was the right one. But have they dealt with the issues that drove them apart? Or is any attempt at reconciliation doomed?

The small town of High Plains seems like a wonderful community. It’s been hit by hardship, not everyone is getting back to normal at the same rate but neighbors are not only willing but eager to help each other. Sure, being known since birth by everyone and his brother has its drawbacks if you want to keep your business to yourself but the “we’re in it together” spirit makes it worthwhile to me.

There are two previous books in the series and we must be caught up on what happened in them and what is now happening with those characters. I feel this was well done and truly appreciate that you don’t drag each of these characters into this book. Where they appear, they’re there for a reason.

But as for the relationship issues between Lexi and Colt, it’s lots of the same thing over and over. Colt feels guilty, Lexi still loves him but can’t face any continuation of the way he was that ended their marriage, Colt still loves Lexi but doubts he can be the man she wants, etc, etc. And more etc.

Oh, wait, there is one unusual aspect to this inspy book and that is that the main couple were divorced from each other. But over and over the main aspect of the plot is how Colt pushed Lexi away due to his guilt. And how he pulled away from her and ended their marriage because he couldn’t bear to see her hurt if anything happened to him because of his job as a policeman. So, yeah, break her heart to save her pain and, since she still loves you, if anything does happen to you, she’s still going to be hurt by it. Sorry, but I find this romance plot increasingly problematic and unworkable for me. No one is guaranteed tomorrow no matter what your occupation so be aware, be as safe as possible and get on with life.

The town wants them back together and contrives ways to push them together. Lexi and Colt resist. But still care for each other. Both wonder if their divorce was a mistake and daydream about being together and wonder if it could work…oh, wait we have to drag our heels and procrastinate some more.

I love the advice Jill gives to Lexi about how the perfect man only exists in the daydreams of fourteen year olds. Everyone’s got flaws and if you trade in the flawed one you have, you’ll just end up getting another with different flaws.

There’s bits about the town rebuilding, how everyone pitches in, and an “oh who’s ring is that?” mystery but most of the book is Lexi and Colt dragging out a reconciliation with lots of endless musing, sorrow over what they lost and being urged to pray.

I do like that as with “Marrying Minister Right,” there’s no hard sell on God. Colt is urged to pray and try and reconcile with God but no one drags him to church nor berates him for his lack of faith. He does feel a little guilty at first and so attends services a time or two for that reason but then he starts to feel true faith.

When a new plot element is introduced in the second half of the book, I wondered if we’d see a showdown related to Colt’s police work and past but this is all taken care of off page. This is a surprise. The way it’s used to highlight an aspect of Lexi and Colt’s relationship that still needs work is done well. But at this point, I was so tired of Lexi and Colt’s two steps forward, one step back dance that any diversion would have been nice.

I would also have liked to have seen a little more “hands on” of Lexi’s career as a vet. She also seems to have a lot of free time to help with the community work for a woman in solo practice.

This is a nice book but there’s a lot of navel gazing and retreads of the same issues, and same thoughts about the same issues and I found myself skimming as the book progressed. Some future couples in the series are obviously being set up but I’m not sure I’ll carry on much further with it. C+