I've been reading your earlier traditional regencies lately, with varying degrees of enjoyment. So far Dark Angel and A Chance Encounter are the two I have enjoyed most of the ones I've read this year.

I lucked into a copy of Red Rose, one of your out of print books, through Paperbackswap.com. I had high hopes for it because I remembered hearing good things about it from friends years ago.

The following description of the book is taken from your website:

The Earl of Raymore is as determined to marry off his newly acquired ward, Rosalind Dacey, as she is never to marry at all. They hate each other with a passion until they discover a bond in their shared love of music. 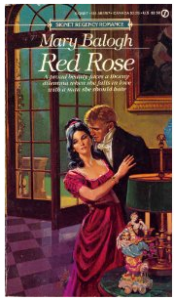 Raymore is one of those old skool heroes whom some woman wronged in the past and as a consequence, he decided to hate all women . In Raymore’s case I think it was both his mother and his fiancée whose actions convinced him that all women must be faithless sluts. I rarely have sympathy for misogynistic heroes, no matter the catalysts that got them started on their woman-hating, so I was surprised that you were able to evoke some sympathy for Raymore in me during a flashback scene in which he is painfully in love with his fiancée while she tells him that she doesn't intend on being faithful to any man.

His reaction is to break it off and become a rake, keeping a string of mistresses who prove to him that all women are exactly what he expects them to be. Things change when Raymore inherits Rosalind and her cousin Sylvia, two orphaned young women, from Sylvia’s father who passed away. It’s Raymore’s responsibility to bring them out in society and ensure that they catch good husbands.

Sylvia is excited about her first season but Rosalind wishes she had been allowed to stay in the country. She is disabled due to a leg that healed badly after it was broken in a riding accident when she was a child and she’s convinced no one will want to marry her because of it.

(The novel begins with a carriage scene of Rosalind and Sylvia arriving in London and discussing the mysterious reason Rosalind will not be able to marry unless she finds a man who will overlook her flaw. I was hoping the flaw would turn out to be that Rosalind wasn't a virgin, so that Raymore would be confronted with his greatest aversion, but alas, this was not to be. Rosalind's perceived flaw was her "lame" leg).

Raymore forces Rosalind to submit to having dresses made and plans to have her sit on a sofa rather than dance during her coming out ball, so that she might attract some older man who needs a mother for his children. He is surprised when Rosalind she defies him by crossing the room on the arm of the young and handsome Sir Bernard Crawleigh and flaunting her injury to a scandalized ton.

In fact, Rosalind defies Raymore more than once, and he responds by being dictatorial and oppressive. The two clash over and over, and the only time Rosalind feels at peace is when she is playing the piano and singing. She doesn’t know that Raymore is eavesdropping from a nearby room, and secretly admiring her skilled musicianship.

It isn’t long before Rosalind ends up betrothed to Sir Bernard, but she starts to have second thoughts when her fiancé pressures her to sleep with him before they marry. Raymore supervises Rosalind and Sir Bernard closely, and realizes too late that he wants Rosalind for himself.

Meanwhile, Sylvia has also betrothed herself to a man she doesn’t love, and realizes it after the fact. Can the two young ladies and their guardian untangle themselves from their snarl of mixed feelings before it's too late?

I liked Rosalind, who shows more spirit than many of your heroines and I thought the conflict between her and Raymore had the potential to be exciting. Unfortunately, that potential never fully materialized. Raymore and Rosalind clashed until quite late in the story, and there wasn't much in the way of courtship between them.

One thing I really liked the scenes where Rosalind played the piano and Raymore secretly listened. I felt that they showed that there was a side of him that secretly appreciated Rosalind's spirit and passion even though he would not allow himself to reveal that for most of the book.

I also thought the subplot about Sylvia was mildly amusing and I liked that it showed a hidden facet of Sylvia's character. But I wish that Raymore hadn't taken as long as he did to show his caring side to Rosalind. I liked that side of him very much when it was finally revealed, but by the time it emerged, I didn’t fully root for him, though I did want Rosalind to be happy.

This is one of those books that was a decent way to pass the time but not one I would reread. C for Red Rose.