REVIEW: One Sweet Ride: A Play-by-Play Novel by Jaci Burton

Your Play-by-Play series has been a pretty consistent favorite for me, with each book featuring an athlete hero and the woman he falls for. In One Sweet Ride, we meet Grey Preston, a very successful team owner/driver on the NASCAR circuit. Grey is estranged from his father, a powerful US Senator, who is currently in the running to become Vice President of the United States. Grey’s relationship with his father was damaged by his father’s drive to campaign for higher and higher office at the expense of his relationship with his family. Growing up Grey would routinely see his dad “glad handing” at his little league games, or using one of Grey’s successes to further his own political needs. And when Grey decided after pursuing a law degree that he would go against his father’s wishes and start racing, the estrangement was complete. So when Grey finds an attractive young woman in a business suit outside his trailer after a practice run at the track, he knows immediately that something is up. 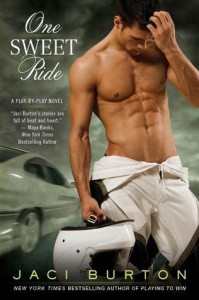 Evelyn Hill works for Grey’s father. But the man she knows is very different from the one that Grey remembers. She knows Senator Preston as kind, and compassionate and deeply committed to his causes. He’s a brilliant politician and a good man. She’s come to recruit Grey to work on his father’s campaign. As one of NASCAR’s most popular drivers, Grey has a large constituency that Evelyn knows the Senator needs to further his campaign. What she isn’t counting on, is her overwhelming attraction to Grey. He’s gorgeous, smart and she immediately feels very drawn to him. Regardless of her attraction, she’s there to do a job, and she sets out to convince Grey to help his father. When she’s summarily dismissed by Grey with an emphatic “No!”, she brings out the big guns, enlisting Grey’s mother to push Grey to help. Grey loves and respects his mother, and reluctantly agrees to work with Evelyn. He’s feeling the attraction too, and has no qualms about getting involved with Evelyn. After all, they are consenting adults, they’re attracted to each other, and neither is looking for any sort of a committed relationship. Plus, the campaign provides a defined end point for their involvement, every one has fun, no one gets hurt, no harm, no foul.

But of course, the more time Grey and Evelyn spend together, the more they  develop a mutual respect for each other. Evelyn learns the ins and outs of racing, and Grey really admires Evelyn’s drive and her political savvy. Once he accepts that not every single thing she does is politically motivated, the two become more deeply involved. But will Evelyn’s ambition, and Grey’s profession keep them apart? Or will they find a way to be together?

I found this book to be…unobjectionable. The truth is that I read it some months ago, and then had to re-read to write this review. The only thing I could tell you after my first read through was that the hero was a racecar driver. It left no lasting impression on me (except the cover, which is deliciously hot, as are all of the Play-by-Play series books). I found Grey to be mostly likeable, although I’m not a big fan of heroes with Daddy issues, and basically, that was the crux of Grey’s problem. And Evelyn was relatively generic. She was the expected tightly buttoned up heroine who was unable to orgasm until the hero’s magic fingers touched her. Generally, I really enjoy your books because they feature extremely spicy, emotionally resonant sex scenes. But sadly, this book seemed to be lacking the usual inventive and hot love scenes. I’m not sure if it’s because I found the hero and heroine to be relatively stock, or that I didn’t really think that they had a central conflict that was particularly significant. Overall, I found One Sweet Ride to be a palatable, if predictable read. Final grade: C