REVIEW: Teach Me by Cassandra Dean 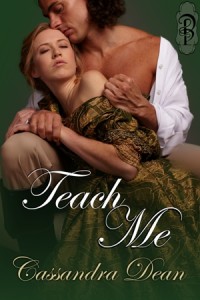 Your heroine, Elizabeth, the Viscountess Rocksley, is at twenty-eight a very curious widow. She married young to a man she perhaps loved but never experienced passion with. (He was the stereotypical Victorian and would only make loved under the covers, clothed, quickly, and with no conversation.) The whole time Elizabeth was wed, she wondered if there wasn’t more pleasure to be had and, after her husband died and she finished her mourning period, she did have three discrete quickies at social events with a very nice rake whose hurried thrusting made her feel something stirring, although not quite thrilling. So, what does she do next? She asks around for the name of a brothel—this seemed ridiculous to me; a woman of her status could no more fish about for the name of a house of ill repute than discuss erotica at a dinner table (which Elizabeth does later in the book and doing so gets her in all sorts of trouble with her respectable social set). She contacts the madam of La Belle Jeune Fille Pieuse and requests an education in carnal pleasure. Elizabeth wishes to know sensual joy, to learn to give and receive it.

When Elizabeth goes to the bordello, she expects to encounter Mrs. Lydia Morcom, the madam. It’s never explained what sort of initial conversation Elizabeth had with Mrs. Morcom, but Elizabeth is expecting her training to be verbal and to be done by the madam. Instead, when she arrives for her first session, she’s met by an icy, gorgeous, arrogant peer, the utterly sexually depraved Earl of Malvern. Elizabeth, initially nonplused, quickly finds the idea of being educated by the Earl damn alluring. He tells her, after having her take off her cloak and checking out her body, that he is willing to teach her all she wants to know.

“I shall show you carnal pleasure, madam. As you say, both to receive and to give. However, pregnancy should be avoided at all costs.” His eyes flickered, the first sign of something resembling emotion crossing his face. “I will not marry you, no matter the circumstance.” Well, of course he wouldn’t. She wouldn’t wed him either. In any event, conception was not a concern for her, not after a marriage that had never yielded— Good Lord. He spoke of practical application. He spoke of touching and kissing and— Was it warmer in here of a sudden? He continued with barely a pause. “Actual penetration will be avoided. While many people extol the virtues of withdrawal, I remain unconvinced. We will discuss methods of contraception during your education, but the most effective method is always avoidance. You are in agreement?” Still confused but now with cheeks aflame, Elizabeth nodded. In all her life, no one had ever spoken so frankly. This, combined with his matter-of-fact manner and lack of emotion, banished any lingering apprehension and left only the excitement. Glorious, thrilling excitement.”

The two agree that Elizabeth will come to his townhouse—discretely of course—three days hence. Elizabeth leaves the brothel in a tizzy—she’s never been so turned on in her life—and James, the Earl, goes to ask Lydia, a woman he’s fucked many a time, why she decided to offer him the “mousy” little widow. Lydia says she thought her present would appeal to his “degenerate soul” and that, since she’s just gifted him, she’d like him to gift her with the reward of his cock which he, without much interest, does.

Three days later, Elizabeth finds herself in the Earl’s home, where the two go over the basics of their arrangement. They will meet twice weekly at five in the evening—this hour is somehow more discreet than other times. The Earl asks Elizabeth to detail her sexual history. She, who has never talked about sex with anyone, is unable to answer. So, because Elizabeth isn’t really mousy at all, she asks him instead to tell her his sexual history.

“My first physical encounter was with a prostitute my father engaged for me at the age of twelve. She instructed me on the basics, at which I became quite well versed in our time together. I took a second lover at fourteen, a third at fifteen, and further extended my knowledge. As a side, I found it amusing to play them off against each other.” He’d had more than one lover at the same time? Before he’d reached his majority? He must have been able to keep them all satisfied—what did he mean he’d played them off against each other? Did they compete for his affections?

Well, not his affections, the man appeared to be made of stone, but, well, what did he mean?

“By the time I left Oxford, I had become quite versed in carnal pleasures, and embarked upon a career exclusively devoted to catering to my whims. There is little I have not undertaken.”

She couldn’t help but stare. He was so very different from anyone she had ever encountered. He just said things—things that were inappropriate and lewd, and not fit for a lady’s ears. She loved it. “Like what?” His brow rose. “What variations upon the basics?” Almost afraid to breathe lest he stop, she nodded.

“Fucked?” The unfamiliar word sounded delicious on her tongue.

“Had sexual relations, intercourse.” All said so factually, so calmly, as if his words weren’t of infinite fascination. “Language will also be part of your tutelage.

Are my qualifications suitable?”

Elizabeth finds his qualifications to be so suitable she almost comes on the spot and the education of the widow Rocksley begins. Within a few visits, Elizabeth has become a pleasure addict—she really likes orgasms, having her body caressed, and hearing the Earl say truly naughty things. Within a few more visits, the Earl—now James– has become an Elizabeth addict—she’s not only a great plaything, she’s sweet, funny, and, instantly adept at both hand and blow jobs. But while Elizabeth is fine being obsessed with James, James is uneasy with his attraction to Elizabeth.

Their visits in the first half of the book have James and Elizabeth either having wild, non-penetrative sex that leaves them both stunned with pleasure or having James lecture Elizabeth about sex in ways that bore him and her. When the latter happens, Elizabeth tends to chatter to James about her life—she comes from a big family, full of love and hurt. (Her bitchy older sister Bella takes every chance she can to criticize Elizabeth; her father drinks too much and defends Elizabeth staunchly.)  James, much to his horror, listens to her and, even worse, thinks about her. She becomes not just a plaything, but a person, someone he, were he a different sort of many, might possibly like.

From the beginning, he has been determined for his encounters with her to be something that would amuse him and nothing more. His insistence on the lack of intercourse is clearly about wanting to emotionally distanced from her rather than any real fear of impregnating her—he’s actually quite adept at birth control. He believes his childhood—his dad held non-stop orgies and his mom, once she’d popped out James, became a nun—has made him a man with no heart. He takes little pleasure in his debauched life but can’t see any other sort of life, especially one with relationships, as possible for him. He truly doesn’t care for anyone—there’s a scene where he has one of his mistresses abruptly thrown out of her house simply because she wouldn’t accommodate him when he dropped by. James is a cold son of a bitch and he finds being drawn to Elizabeth almost distasteful.

This book bored me. The first half of it is erotica based on torrid encounters between the iceman who’s done it all and the (relatively) inexperienced woman who comes at the drop of a hat. The sex scenes are repetitive—I found, by the time I’d read about it for the fourth time, I didn’t care Elizabeth found having her nipples pulled at arousing—and predictable. Elizabeth and James represent female/male archetypes in a hackneyed way: she represents emotional connection; he, relational diffidence. It was clear, from the moment the two first gazed at one another, that each would be the other’s salvation. The second half of the book, focused on James’ fear of intimacy, made me impatient. James is a dick, but he’s a smart dick. He knows what he has with Elizabeth is worthy of attention and of, on his part, change. It seemed to me to be a manufactured cop-out for him to abandon her and his feelings for her just because he was scared he didn’t know how to be someone other than the cretin his father had told him he’d be. James may be a man in bed, but, in the rest of his life, he’s an immature cad. I found myself envisioning a better ending for Elizabeth in which she took all the knowledge she’d gotten from James and found an adult to share her skill set with.

At the end of the novel, James is, somewhat unwillingly, trying to live in Elizabeth’s world—a world that involves thinking about someone other than himself and how much he needs Elizabeth. He comforts himself by thinking about the first year of their marriage where it was just the two of them alone, in a villa in a small town in Italy. His fantasy made me cringe. It’s not enough for him to have Elizabeth as his—he’d like for the two to be everything to one another, others be damned. For me, no matter how great in bed he is, no matter how much he loves Elizabeth, his passion is one that limits her in ways he doesn’t seem to even be aware of.

As I finished the book, I was reminded of the quasi-wisdom of a trite 1970’s phrase: “If you love something, let it go. If it comes back to you, it’s yours. If it doesn’t, it never was.” I can’t see James ever letting go of Elizabeth and, really, that’s rather sad.

→ Dabney
Previous article: Master of the Universe versus Fifty Shades by E.L James Comparison
Next Post: How I Came to Appreciate Fan Fiction