REVIEW: Mystery of Nevermore (Snow and Winter, book 1) by C.S.Poe 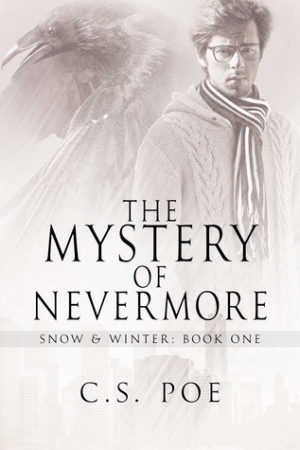 It’s Christmas, and all antique dealer Sebastian Snow wants is for his business to make money and to save his floundering relationship with closeted CSU detective, Neil Millett. When Snow’s Antique Emporium is broken into and a heart is found under the floorboards, Sebastian can’t let the mystery rest.

He soon finds himself caught up in murder investigations that echo the macabre stories of Edgar Allan Poe. To make matters worse, Sebastian’s sleuthing is causing his relationship with Neil to crumble, while at the same time he’s falling hard for the lead detective on the case, Calvin Winter. Sebastian and Calvin must work together to unravel the mystery behind the killings, despite the mounting danger and sexual tension, before Sebastian becomes the next victim.

In the end, Sebastian only wants to get out of this mess alive and live happily ever after with Calvin.

I really enjoyed the first quarter of this book. I actually liked Sebastian’s voice throughout the story, but I started rolling my eyes at the characters’ actions and it significantly lessened my enjoyment of the later parts. The blurb describes the setup pretty well – except that not once did I feel Sebastian actually *wanted* to save his relationship with Neil. Everything else seems to be accurate. We have a bookseller (sorry – antique dealer) with a heart condition (sorry – eye/vision condition) who lives with a closeted detective.  Seriously. I am guessing the writer quite deliberately made the choice to invoke memories of Adrien English and Jake from Josh Lanyon’s series, especially considering that the book has a dedication to “Josh, master of mystery who helped me find my own voice again”. If the choice to invoke those associations was not deliberate, well, I certainly saw the similarities.

So, Sebastian arrives at his store and he and his assistant they find a heart there. They call the detectives, of course, and when Sebastian meets Calvin he really likes what he sees, but Sebastian has Neil at home. Neil comes to the store as well when he hears about the detective request, but Neil does not want anybody to know that they are together and says that they are just friends.

It seems that the main reason Sebastian and Neil are fighting is because Sebastian does not want to be Neil’s secret anymore. Now, when I see this conflict in the book I always say the same thing – I am a straight woman, I cannot judge it. I have always felt that it is nobody’s business but an individual’s to decide whether to come out of closet or not, and on his own terms.  Having said that, I respect that Sebastian wanted the relationship out in the open – I just could not help but feel that he was being a bit of an ass towards Neil, even though author seemed to want me to feel bad for poor Sebastian. Walk away, Sebastian, if you feel that strongly, no? But setting aside connecting or not connecting with the characters emotionally, I do not feel like I had the right to agree or disagree with their choices.

You can probably guess that discovery of the heart was just the beginning. Soon Sebastian stumbles upon a murder, and he becomes a suspect for a little while. When the police ask him for an alibi, he tells them that he was home with his boyfriend and gives them Neil’s name. In other words, he effectively outs Neil at work. Did I feel he was being an ass? Absolutely, but he thought he would be arrested otherwise. Should he get a pass on that? I have no idea. Anyway, Neil is pissed and finally walks out. Sebastian tells Neil that if he walks out Sebastian will have the locks changed; the way I interpreted his mood is that he was relieved, whether he was willing to admit it to himself or not.

This all happens in the first fifteen to twenty percent of the book. Soon after that Calvin pays Sebastian a visit again, asks him case-related questions, tells him that he could be connected to murders and then… offers to suck him off. No, really, he does.

So, I just want to note for the record – after that episode, whenever Calvin was engaged in official police business I pictured him in a clown suit. I just could not take him seriously anymore. Look, I figured they were going to get together, since the blurb was pretty clear on that point, but could the author have managed the timing a bit better? Perhaps they could have hooked up when Sebastian was not officially a suspect anymore?! Even Sebastian himself seemed shocked by Calvin’s behavior. He was happy, but he was shocked, thinking that one second he was being accused of murder and then suddenly getting the best blowjob ever. Eh, so, good for you, Sebastian?

Also, please note that all of this happens while Ross and Rachel (sorry, I mean Sebastian and Neil of course) were on a break, not having officially broken up yet. The cheating aspect did not bother me one bit, I thought the author actually established quite well that Sebastian had enough of his relationship, and as much as I thought he was a little bit of an ass about pushing Neil out of closet, Neil did not seem to be very kind to him either. I thought it was clear that those two would be better apart than together, but if any kind of cheating bothers you please beware.

I was pleased that Sebastian quickly admitted to himself that he had indeed cheated, and at least he did not lie to Neil. I was glad when they parted and hope it was permanent.

I thought Calvin and Sebastian’s attraction developed very fast. This is book one of a series, so I hope they will have time to develop a more meaningful relationship, and hopefully there will be less “sweetie and baby” – this is just a personal preference of course, but especially “sweetie” grated on me.

I was also pleased to hear that Sebastian was self-aware enough to realize that he substituted one closeted detective for another, so maybe Neil being closeted was not the real issue between them? At the end of the story Calvin does make a step out of the closet, though, so there he was different from Neil.

The mystery plot is closely related to Edgar Allan Poe’s books and I will let you find out all about the mystery if you decide to read the book. It was entertaining enough, but I thought the suspect was pretty obvious (not because of anything he did plot-wise, but because of how he was introduced) and I thought the red herring suspect was a little clumsily done.

I also want to note that at the end of mystery investigation Sebastian showed exceptional stupidity. I was perfectly okay with him getting involved in the police investigation, because when I see that a book features a civilian sleuth, I go into the story with the mindset of suspending disbelief. But this setup can be done believably, and preferably without making the sleuth look like a total idiot.

Here’s what made me roll my eyes: When Sebastian has a revelation who the murderer is, he decides to go to the gathering where murderer would be *several hours later* to catch him alone. He does not call Calvin (despite Calvin asking him several times to come to him with everything new about the case), because he is afraid that murderer (who is not a policeman or a former Marine, recipient of Medal of Honor) will come after Calvin (who is a policeman and a former Marine, recipient of Medal of Honor) and hurt him. I guess the thought of asking other cops to come and check out the gathering did not enter Sebastian’s head. He also has time to go into Calvin’s apartment before going off to the gathering, where he writes down his thoughts about who the murderer is so Calvin can catch him if Sebastian ends up dead. So presumably the thought of murderer coming after Calvin when Sebastian would be dead is not so worrisome anymore? It made no sense.