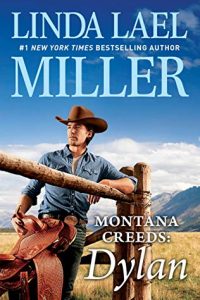 Despite the fact that I’ve heard of your name since I got back to reading romances, I’ve never tried any of your books. Can’t say why since I don’t recall any horrible press or bad reviews. I guess it’s just a case of never having picked one up. When Jane sent a copy of this arc, I decided it was time to finally one of the romance world’s best known authors.

Dylan Creed is from the legendary Creed family. Born and bred in Montana for generations, the Creeds seem to be hard living, hard loving, down home cowboys. Dylan certainly lives up to a lot of this.

The middle son of Jake Creed, he had to live down his father’s hard luck, hard drinking life. Now, Dylan’s a former rodeo bull rider who just got saddled with his two year old daughter when her mother decided she couldn’t take care of Bonnie anymore. His first thought is “What does a two year old eat?” followed by the instinctive urge to head home to Stillwater Springs.

When he arrives, he discovers that his high school love, Kristy Madison, is the town librarian and that she didn’t marry the man she rebounded to after Dylan left town. Dylan also discovers that Kristy is still a little pissed at him, that the spark between them is still hot and that Kristy adores Bonnie.

In addition, Dylan is still working on reestablishing a relationship with his two brothers, Kristy’s father might have committed murder years ago, Sharlene is still hitting Dylan up for money even though she no longer has Bonnie, there’s a town election for the next sheriff, rich people are bidding on the old Madison place and the local real estate agent has some kind of grudge against Kristy. Yep, there’s a lot to keep track of in Stillwater Springs.

I started the book wanting to see more of Dylan the rodeo performer but quickly realized that he’s retired. Bummer. Then suddenly there’s a toddler in the picture. Generally this would be the time when I start to twitch. However, I was amazed that I actually liked Bonnie. Here’s a real two year old. Though she’s often described in terms of an angel (surrounded by halos of light and with golden curls) she acts like a toddler. Sometimes she’s sweet and sometimes she’s a holy terror. Dylan’s interactions with his daughter are not cloying but very realistic.

“I shoveled some of that toddler goop into her mouth earlier,” Dylan answered, after tossing a fond glance in his daughter’s direction. “She spit most of it back at me, but I figure enough went down to hold off starvation.” 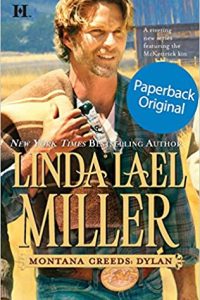 Dylan has a fine sense of humor and I laughed with him throughout much of the story. He’s also having to work hard at not slugging his brothers after swallowing his pride to ask his elder, lawyer, brother for help with his custody suit for Bonnie. There’s bad blood between the three men that you slowly explain the origins of. Fine and good and I can see where it came from, given their father and their upbringing. These were actually the best parts of the book for me, watching Dylan and his older brother Logan, who just had his own book last month, gingerly ease back into being a family.

I did get tired of the many references to the Creed Family History, the Creed Bond with The Land, what Being a Creed Means, etc. It’s obvious that this is a family you’ve written about often in the past but at times I could almost hear the crescendo of western style, manly music as these men got back to their Creed Roots. Be that as it may, I still think your descriptions of them sound like some rowdy brothers I know.

Kristy Madison is a cowgirl turned librarian. She’s pretty, hard working, has a nice life, a home of her own that she’s lovingly restoring and a Persian cat. I have a Persian cat so you score points with me there. I was glad that she didn’t dissolve into a puddle of goo the moment Dylan and Bonnie hit town. She actually waited a few days before the meltdown.

And this is when the grade for the book began to slip. Right about the point where it dawned on me that this was going to be one of those stories with characters who worship at the Altar of the Holy Womb. That’s right. Women who genuinely seem to feel that unless they’ve spit out a young ‘un, nothing in their life is really worth while. Of one woman Kristy thinks, “though she and Bill had never had children, it was common knowledge that they were still as deeply in love as ever.” At another point, Kristy glances around her pristine car and despairs that there are no sippy cups or baby seats or toys scattered through it.

Now don’t get me wrong. I realize that my choice and ardent desire to remain childfree is not one shared by many women. I know fast friends whose main desire in life was to be a mommy. God bless ’em and my own mother too. But I hate the feeling that I should be kowtowing to a diaper bag and that there’s something wrong and sad about my life if I’m not. And the fact that the one woman in the book who doesn’t want a child is a worthless, gold-digging tramp.

While I was sinking under the weight of all this Womb Worship, I was still wondering about the mystery of Kristy’s father. Had he done somebody wrong years ago? And what would be discovered when a supposed grave site was exhumed? And could a murderer still be roaming loose in town?

As the remaining pages of the book dwindled, I started to worry that the resolution wouldn’t arrive until the last book in this obvious trio. Which pissed me off but since I want to know about that brother, I was prepared to wait it out. I almost wish this was what happened instead of the deus ex machina wrap up I got. My notes state, “Where the fuck did this come from!?” ‘Nuff said.

So, was my decision to try one of your books a good one? Yes, and no. I loved the relationship between the Creed brothers. I enjoyed the subtle humor in the book. I actually liked the toddler which flabbergasted me. Though if a pharmacist actually advised giving this child aspirin, I hope someone stops Dylan before he does it. I also think that readers new to the series will be able to pick it up here and not miss anything.

I didn’t like feeling that my life accomplishments so far would be deemed a nice try but ultimately doom me to third place in the world of the Creeds. And the resolution of not only the murder but the custody battle were weak. After debating, I’m going to settle on a C+ grade.