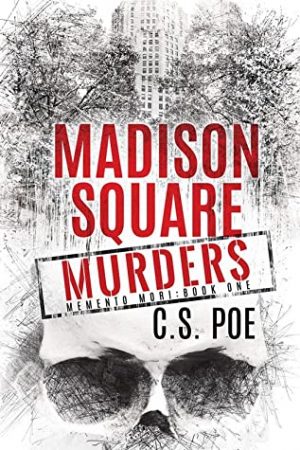 Everett Larkin works for the Cold Case Squad: an elite—if understaffed and overworked—group of detectives who solve the forgotten deaths of New York City. Larkin is different from others, but his deduction skills are unmatched and his memory for minute details is unparalleled.

So when a spring thunderstorm uproots a tree in Madison Square Park, unearthing a crate with human remains inside, the best Cold Case detective is assigned the job. And when a death mask, like those prominent during the Victorian era, is found with the body, Larkin requests assistance from the Forensic Artists Unit and receives it in the form of Detective Ira Doyle, his polar opposite in every way.

Factual reasoning and facial reconstruction puts Larkin and Doyle on a trail of old homicide cases and a murderer obsessed with casting his victims’ likeness in death. Include some unapologetic flirting from Doyle, and this case just may end up killing Everett Larkin.

I wrote this rant right after I finished the book. After muling this one for couple of days I decided that any attempt at even measured and well reasoned review just not going to happen, so I left my initial rant in place.

Only he does not have to, he can ignore his husband as he pleases, his texts, his attempts at communication at saving their marriage. I just could not spare an ounce of sympathy for poor traumatized Larkin. I hoped that his husband, whom he ignores and then leaves, would find somebody who would love and appreciate him.

I don’t even know why I got so upset. Normally I am the kind of reader who is perfectly happy even with cheating in my romances as long as it influences the plot and character development – basically when it makes sense. There is no cheating in this book, but it is just that I was so obviously reading and interpreting against the author’s intent that I can’t deal with it.

Larkin tells us that Noah ignored poor him, but on the page is the absolute opposite. Argh.

Also, and I don’t deny that it is a secondary issue, very secondary, but at times I thought that he was a badly drawn Holmes caricature. Of course there are tons of super observant detectives, but would they solve the case every single time in real life? Every. Single. Time?

The mystery plot itself was fine, and normally I would have been admiring Larkin’s dedication to his work in the Cold Cases Unit, to bringing justice to the victims, and being upset when he could not do so.

The resolution was extremely strange. We do get our killer at the end, or do we? There was a hint at the very last page that the killer may not have been caught if I read it correctly and if I did read it correctly, there  is nothing more annoying than the mystery with no killer caught at the end.

I mean I get that it is a first book, but I thought that in the next books Larkin and Doyle will be working on their relationship and mysteries will still be solved at the end of each book. Maybe not. Not that I am likely to find out.