I really liked the first Steele Street stories. One thing, in particular, is that they sounded very modern. Over time, however, because the books are similar to one another, I stopped being impresed by the fresh tone because, well, it wasn’t fresh anymore. And with extended exposure to anything, the flaws in the series began to stand out. This is particularly true when the flaws are consistent from book to book. 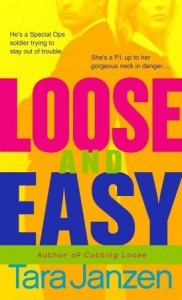 Loose and Easy is focused around a twenty four hour period that starts when Johnny Ramos, former street kid and gang member, turned superfly military guy spots a high school crush apparently turning tricks. Nicknamed Easy Alex due to the lock she had between her legs, Esmee Alden is the last person he thought would have gone from Valedictorian to well, insert your own tasteless “head” joke here.

Of course, Esme is not a hooker but rather a purported expert in art recovery. She’s doing a job in Denver to get her father, who loves to gamble, out of hock for the last time. The job is pretty complicated. Get a piece of art, deliver it to the collector, get the money, pay off the bookie, threaten the bookie with some secret information, and then hightail it back to Seattle, where her home base is. Johnny is waiting to be reassigned into the special military black ops group called SDF which is headquartered out of Denver. In the meantime, he has nothing better to do that follow Easy Alex around.

In a theme that I see sadly all over these action books that have a putative female lead is that the heroine has no ability to solve the problem on her own. Easy Alex is able to recover the stolen art but from the time that Johnny shows up on the scene, he takes over. Nearly every interesting scene is viewed through his lense which, while admiring, is mostly up her skirt. While no one ever took Esme to task for her screw ups, I, as the reader, couldn’t help but wonder how she made it this far alive and healthy.

To heighten the unvaried quality of the stories, every male “good guy” character sounds the same from the hero, to the heroine’s cousin to General Grant, the head of the SDV. They all have the same mannerisms, like they were popped out of a Tuppererware popsicle mold. They all love cars. They all engage in Gee fucking louise like epithets.

Too many off hand references to past characters i.e., what the heck does whether Dylan is holding the reins too tightly on his wife, Skeeter, have to do with anything if that is the only time that issue will EVER be referenced?

Still, the action moves along quickly, there is serious chemistry between Johnny and Esme and if you read it for nothing more than a few hours entertainment, the reader probably won’t be dissatisfied. It’s not a meaty read, though, worth more than a one time trip through the pages. C+