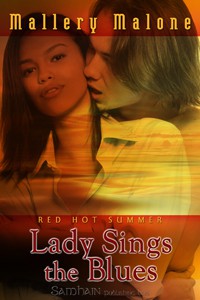 Thank you for submitting your debut Samhain Red Hot, “Lady Sings the Blues,” a short story featuring an interracial Romance between club owner Alina Gabriel and Blues musician Joshua Hanover. I am a big fan of short stories and novellas, because when they are done well, they are a perfect portion of character and plot, able to be read and enjoyed in one sitting. While “Lady Sings the Blues” didn’t blow me away, it was competently written and had some interesting elements.

Alina Gabriel has named her club “The Scarlet Lady” after her alter ego, a seductress par excellence who was trained in the exotic dance clubs and who still emerges on occasion to strut on top of the bar in a red corset and sexy boots. She has some serious lust for Joshua, whose good looks, guitar skills, and sensual voice make him a favorite at the club. Although Alina doesn’t realize it, Joshua shares her feelings, having even written her a song, “Red Letter Woman,” which he hopes will encourage her to dance during its performance. Joshua can’t actually see Alina dance, since he is blind, but he has become attuned to her energy and her voice, and his band has described her appearance (including whatever sexy outfit she happens to be wearing) in graphic detail.

The evening the story opens, Alina has decided to work off some of her sexual frustration alone in her office, during which Joshua interrupts her. Although the scene that follows seemed rather unrealistic to me in terms of Alina’s reaction to Joshua’s presence, it does create the excuse both of them have been looking for to indulge their seemingly unrequited attraction. What follows is a sexual extravaganza that continues to ratchet up in intensity, with Joshua finally daring to ask Alina out on a dinner date. Completely taken aback by the turn in their relationship – and very insecure about why Joshua would want to date her, rather than just enjoy her sexually – the two begin a tentative courtship that brings their vulnerabilities to the fore.

Alina, despite her sexual self-confidence and business success, remains unsure of herself as love object, seeing herself as someone men are more comfortable lusting after than loving. Joshua, on the other hand, may have done much to overcome the limitations inherent in his blindness, but he is still not free of the concern that a woman as successful and strong as Alina would choose a blind man as her partner in love. Alina is also concerned about their racial differences, as part of her general issues with external approval and respect. Joshua is not concerned about this at all, caring far less about what anyone but Alina thinks about their relationship.

The conflicts that develop from Alina And Joshua’s insecurities registered as the most authentic and the most interesting aspects of the story to me. It made perfect sense to me that Alina’s fears about her lovability would manifest themselves in a way that would trigger Joshua’s fears that she could not accept him fully as a blind man. That he would not understand why Alina was distanced from him made sense given his own insecurities, and I liked the way the story revealed the way these fears eroded their fragile emotional bond. I also appreciated that Alina fully accepted her sexuality, even if I was sometimes frustrated at the way she seemed so insecure about her value as a person. I also liked that the conflict between Alina and Joshua didn’t go on and on and on, but was resolved in a relatively brief timeframe (of course it had to be given the brief page count of the story, but still, the pacing felt reasonable to me). And in general, their conversations felt realistic in voice and syntax.

The sexual content of the story is quite high and was pretty sexy. I did have a couple of WTF? moments, especially at Alina’s initial reaction to Joshua’s cock (her whole paean to anal sex there felt a bit like a means to show me how cool and sexually progressive Alina was) and, as I already said, to her behavior when Joshua first comes into her office at the beginning of the story (is she the last one to realize that a blind person’s other senses are heightened?). Those early scenes made me wonder whether the whole point of the story was to see how many times and how many ways Joshua and Alina could get it on. But as the story developed, the emotional aspects of the relationship emerged as dominant.

The one thing that concerned me a bit, and continues to perplex me, is the way Alina’s blackness seems to be compared to Joshua’s blindness in the following scene:

How was she supposed to say yes? All she knew of relating to Joshua was within the club as Miss Scarlet. She wouldn’t know the first thing to do or say with him outside of these walls. Alina knew he’d realize in the first five minutes how much of a fake she was, and then he’d be gone.

Point taken. It was a stupid thing to bring up now considering how many times they’d had sex in the past week. Here it didn’t matter at all. Outside though, was a different story.

This may just be one of the difficulties inherent in negotiating a Romance in which race is an issue, but I am still struggling with the idea that Alina’s race is being presented as a physical disability on par with being blind. While it is true that both are physical conditions that are part of who each character is, and while it is also true that we are clearly not supposed to think any less of either character based on these characteristics, there is still an awkwardness in that exchange that stuck with me throughout the story. Did Joshua mean that he couldn’t see Alina and therefore her blackness didn’t matter? Did he mean that he was at a disadvantage, as well? Or did he mean that he just didn’t care what her race was and used his blindness as a way to communicate that to Alina? I’m still not completely settled on how this scene is supposed to play, and it was an issue that I would have liked to see more carefully nuanced, especially since race was a significant issue for Alina, and, by extension, within the story itself.

For a debut work, “Lady Sings the Blues” managed to hit at least a couple of high notes, especially in the realistic portrayal of Joshua and Alina’s relationship conflict. And despite its lower notes, overall I found it a competently composed story and a solid C+.