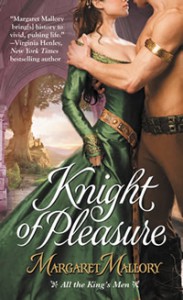 I remember a number of people raving about your debut in the If You Like Debut books thread. I bought the debut book, Knight of Desire, but by the time I got around to reading it your second book, Knight of Pleasure, was out. So I read that one first. While I felt that I would have appreciated some of the nuances in the character of Stephen, the hero, more had I read the first book in the series, I was not lost.

Lady Isobel Hume was married off the age of 14 to a neighboring lord with quite a bit of money and power. Her father promised her that when Hume died, she would have her independence. No one really thought Hume would live as long as he did. He eventually dies when Isobel is 22 and she finally thinks she is free. But somehow, because she and Hume did not have children, a bastard born to a woman of quality convinced Hume that he was Hume’s son. In Hume’s will, he leaves his entire estate to the purported son, Graham. Isobel is enraged and turns to her father for aid.

Her father turns to Bishop Beaufort, the uncle of King Henry, to have the property given back to Isobel. Bishop Beaufort gives her three choices: marry Graham, marry someone your father picked out (and didn’t he do a good job the first time), or go to Caen and marry someone politically advantageous to the Crown. Isobel chooses to go to the court of Henry and await a marriage to be arranged with a Norman lord.

Once at the court Isobel is reminded that she is to dutifully serve her King, particularly when her father did not. She is instructed to determine whether her new spouse will be loyal to the Crown or is fomenting some insurgency. Sir Stephen Carleton is appointed to be an assistant to the bailli of Caen. Stephen chafes at this because he is a knight.

When Isobel and Stephen first see each other, they are quite taken with one another, but they both know their duty. Further, when Isobel is introduced to her future mate, she is delighted. Philippe de Roche is wealthy, extremely handsome, attentive without being overbearing.

This is not a triangle though for Isobel’s heart is never engaged by Phillipe and he is often gone from Caen while Stephen is there. I liked that the story took place over a period of time. Isobel arrives in Caen in November 1417 and the story culminates in April 1418.

The best and worst part of the story was Stephen’s character arc. Stephen arrives in Caen believing he can never love a woman because the one woman he wants has already been taken. It’s his sister in law, apparently the heroine in the first book. Stephen was a young boy but he seems to believe that he won’t grow out of his “love” for Catherine. While I appreciated that he did, there wasn’t any internal recognition that his feelings for Catherine were simply infatuation. At one point, Isobel watches Stephen with Catherine and even Isobel sees his heart in his eyes, even after Stephen was supposedly in love with Isobel.   I really needed to see this issue dealt with but it never was. We are simply to assume that his feelings for Isobel overrode those longings for Catherine. "For the right woman," he said, meeting his nephew’s eyes, "I would give up all the others without regret."

As for Isobel, I felt like this was a case of making lemonade out of lemons.   A woman of that time period was chattel, to be used to gain money for the father or alliances with the king.   In trying to provide her a measure of independence, you gave her the ability to be a sword fighter and yes, this played a small role in the story, overall I found Isobel to be terribly bland.   The sword fighting thing felt so contrived and not well integrated into Isobel’s overall storyline.

The interaction between Stephen and his nephew were well done and the Isobel’s struggle as a woman, her futility for independence, was also well portrayed. There were definitely high points and I would read your work again. C

→ Jane
Previous article: Top Ten Romances of 2009 by Janine
Next Post: Midday Links of Love: 50% off Ebooks at EHarlequin Today