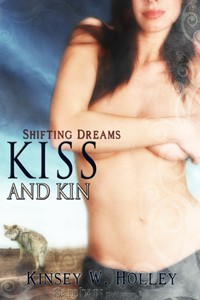 I bought this ebook because it was a new release from Samhain and because I found you entertaining and interesting on Twitter. (I think we shared a bad attitude Twitter day). I hadn’t realized when I bought and read it that it had been reviewed by Sarah over at SmartBitches. While I don’t disagree with Sarah’s comments about the flaws in the book, I would rate this book higher than a C- and here’s why.

Lark Manning has had a crush on Detective Taran Lloyd since forever. His family took her in when her parents died and her youthful hero worship has evolved into something much more adult. Unfortunately Taran hasn’t noticed that she has grown up and Lark is reluctant to force the issue for fear of rejection. Family dinners would be no fun.

What Lark doesn’t know but we, as the reader, do know is that Detective Taran Lloyd has not only noticed that Lark Manning has grown into a very hot woman but that she is his mate. He hasn’t figured out how to broach the mate subject with Lark. For the past three years.   He is concerned, nay afraid, that if he tells her the truth she’ll look at him with disgust or pity because she thinks of him as family. In fact, she even calls him “cuz” (short for cousin) in a way that he sometimes wonders if it is designed to piss him off.

Taran is imbued with just the right amount of jealousy so that he doesn’t come off as a bad pyscho, just overtly possessive of the woman who he intends to claim, someday. ” As soon as he said it, he noticed Lark across the room at a banquette with another woman and four slimy-looking wolves in suits. Taran automatically considered any guy with Lark slimy-looking.”   Later, after Lark and Taran get together he is concerned about her oral skills:

"You give damned good head." He was quiet for a minute.  "Where’d you learn that?"

She could sense his dismay.

"Taran." She rolled over on top of him, resting her chin on  his stomach. "I’m twenty-six. I would’ve waited for you if I’d known you wanted  me, but come on."

An unknown group of werewolves coming into the Houston territory and siphoning off women.   Taran is investigating it and the stakes are racheted up when Lark is targeted.   The suspense is actually pretty good for a a novella although the WHO in the whodunit is patently obvious from the start.

Like Sarah, I thought that the werewolf culture was smoothly integrated into the story.   There was no separation, really, of man from beast. Even in the man form, Taran refers to himself as wolf and follows the clan protocol.   Bits and pieces of the worldbuilding are provided in concert with the characters activities:   “He pulled a ten from his wallet and held it out, staring at her eyes as he did so. She snorted at the cheap shot power play, but it worked-‘a human couldn’t maintain eye contact with an alpha.”

I also enjoyed that Taran’s character stayed, for the most part, true to form.   While he was slightly defanged toward the end, he acknowledged it in a funny way, making it easy for the reader to accept: “Apparently, getting bonded to your mate made you act like a chick.”

There were problems and not ones that I can solely blame on the shortness of the story.   First, Lark has grown up around werewolves, or at least around Taran, and evinces no signs of disgust or dislike for the werewolf culture. In fact, Lark seems shockingly ignorant of werewolf culture at times which made little sense.

The were some funny but embarrassing phone call exchanges made between Taran and Lark which were so treacly that it reminded me of the Seinfeld Schmooppee episode wherein Seinfeld and his bimbo du jour called each other by increasingly cute nicknames and engaged in quite a bit of PDA to the chagrin of all of Seinfeld’s friends.

I didn’t get Taran’s constant reference/insult to TJ, Lark’s best friend, as a secretary. I felt like I was missing some backstory or joke there.

Finally, I struggled with the mate explanation. The big discussion of the mate v. love concept comes toward the middle of the book in an exchange between the heroine and her best friend TJ. The mate bond can overtake emotional attachments. If a man loves a woman but his “mate” comes along he’s in for a world of hurt. How wasn’t entirely explained. If the mate bond is a biological imperative that affects the wolf both physically, mentally, and emotionally then the only person that is hurt is the woman the man had loved who is not the mate. Very few wolves ever find their mates. Perhaps this is one area in which the length of the novella stymied the exploration of the mate bond concept.   I definitely wanted that explored more fully.

In the end, though, I am left anxious to read more in this world that you are building. Even better, it made me hungry to read more sexy shifter stories. C+

This book can be purchased at Samhain in ebook format or other etailers.