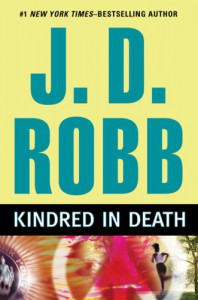 It’s been a while since I purchased one of the In Death books in hardcover (I prefer digital these days), so when I received my ordered paper copy of Kindred in Death in the mail I immediately noticed a couple of changes. Not only has the author photo been removed, but the Nora Roberts name has been removed from the book, as well, replaced only by a general bio for JD Robb as a pseudonym for a New York Times bestselling author. I wondered whether those superficial packaging changes boded any substantive changes between the covers, and indeed, this book seemed much more focused on the police procedural and mystery aspects of the series, rather than the romance and personal relationship issues. That was not necessarily a bad thing, but I wonder if it’s what kept me from feeling totally engaged in Kindred in Death.

When Eve Dallas gets called to the home of NYPSD Captain Jonah McMasters to oversee the investigation of the horrific rape and murder of his teenaged daughter, Deena, both Eve and the reader know that this case will be especially difficult. Whoever committed this crime did so in the McMasters home while the parents were away and left the body tied and ravaged for them to find upon return. It is clear right away to Eve that the death is intended as both fact and message, with strategic clues left for the police to find and critical pieces of evidence wiped away or corrupted by the killer(s). Captain McMasters, who has recently been promoted to his new position, is at a loss to imagine who might be responsible, and as far as either parent knew, Deena was still too innocent to have a boyfriend and, as the intelligent daughter of a cop, too savvy to simply let a stranger into the home. So it is up to Eve to discover not only the killer(s) but also the motive. And she must do so quickly, impeded by the lack of physical evidence at the scene and haunted by the memories of her own past.

It is difficult to talk about the procedural/mystery aspects of Kindred in Death without giving spoilers, so I will do my best to be thorough in my analysis without crossing into substantial spoiler territory.

I enjoy best the books where Eve is pitted against someone smart and where she truly has to match wits with her perp(s). Kindred in Death is one of those books, facilitated in large part by the fact that Eve does not have an immediate set of good suspects. What I like about these books is the way the reader tags along with Eve, putting the pieces together just as she is, struggling with the same gaps and frustrations and limitations. However, there can be a challenge in this approach, as well, which is that the reader, as a mere observer, may not feel a strong connection to the case and the perpetrator(s). And in this book, that was the case for me.

The murder of Deena McMasters was brutal and brutally described. Multiple times. The repetition, along with Eve’s strong visceral reaction, was likely intended to engage me, along with Eve, to the mystery through the victim’s death. A sixteen year old girl who was full of life and promise. Who was innocent. Who was loved by her parents and had a friendship with Jamie Lingstrom. Who was the daughter of a fellow cop. All of these links, all of the horror of the death. And yet I felt estranged from it all, even as I was reading. Was it because I could not get into the mind of the killer(s)? Was it because I’ve become inured to the many horrific crimes with which Eve has had to deal? Or was it because one of the key criminal players had far too little page presence, despite this person’s importance to understanding (not just solving) the mystery?

I suspect it was all of those things, but I also wonder whether the increased prominence of the procedural aspects of the story contributed to this nagging sense of distance, as well. For me, it’s not that the romance is all-important; rather, the strength of the series is the way the romance is intertwined with the suspense. From Eve’s own personal journey to her relationship issues with Roarke, the personal and professional aspects of her life have been so compelling to me that I’ve relished the mystery/procedural aspects of the books as much as the romance, recognizing that they are essentially enmeshed and that they reinforce one another.

While the procedural aspects of the novel were prominent, I felt that there was far more time devoted to solving the mystery as opposed to really understanding the psychology behind it. Although it’s possible I feel this way because the whole set-up felt a bit forced to me, unpredictable more in artificiality than in novelty. As for the personal aspects of the book, it’s not so much that Eve and Roarke’s relationship felt like background in this novel as much as it felt familiar in ways that kept me from sharing the sense of urgency and emotional engagement in the novel’s movement. Even Charles and Louise’s wedding, which should have been a highlight of Kindred in Death, did not really move me. As soon as Eve spontaneously volunteered to host the pre-wedding preparations at her home, I felt I knew what to expect (i.e. Eve immediately regrets her generosity, Peabody approves of Eve’s moment of weakness, social terror ensues, etc.). And ultimately, I couldn’t help but feel that the whole thing was a replay of Mavis’s baby shower a few books ago, complete with Trina and her dreaded beauty potions. From Mira and her harmoniously coordinated wardrobe and perfectly styled hair to McNab and his neon clothing combinations and sleek blond braid, the series cast all felt a bit bland in their familiarity. And while Summerset and Eve seem to be experiencing a nice evolution in their everyday sniping, it wasn’t enough to make Kindred in Death a winner for me. Instead I found the book a competently written, reasonably well-plotted procedural. C+