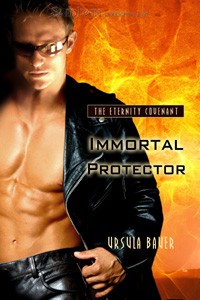 I’ve had this in my TBR pile since Keishon’s review last year. I’ve dusted it off (metaphorically since it is an ebook) for Keishon’s monthly TBR challenge. While I agree with some of Keishon’s points (particularly on the extensive world building), I found the romance to be forced in many places.

Dr. Megan Carter is working on a drug that she hopes will help save children with brain tumors. Unbeknowst to Megan, it is foreseen that she may be the instigator of a cataclysmic shift in the futures of gods and humans. Gideon Sinclair, immortal soldier, gets to her first and spirits her away.

Sinclair’s superiors are part of the Eternity Council, a mythic League of Nations, that work together to enforce balance between good and evil. Even the so-called evil gods recognize that without balance their own existence can be put in jeopardy. Of course, the truly evil will always want more power, and thus, there is Gideon and his compatriots who are dispatched to dispense justice.

The external conflict is much stronger than the internal one but smartly overlaps. Sinclair is ordered to terminate Carter to prevent the future that is foreseen by the mystics. Upon meeting her, though, he has doubts as to his orders and deviates from them. Gideon decides to employ a “wait and see” strategy.

Even though Gideon has chosen not to terminate Megan, others aren’t so interested in keeping her alive or capturing her for their own nefarious purposes. Plus, Gideon and Megan must work together to determine what her role is in keeping the future balance and who might be behind the possible creation of an inbalance.

I also found the attraction between Megan and Gideon contrived. When Gideon first arrives on the scene to capture Megan, he reacts physically to her. Even though Megan is being carted off to some unknown location after being attacked by zombies and other creatures, Megan can’t help but noticing Gideon’s “magnificent chest.” “From this position she could see his magnificent, injured chest. She watched it rise, then fall, as if he still breathed.” She was still bound and gagged at this point by Gideon. I think the last thing I would be measuring was the magnificence of someone’s chest who tied me to a chair and gagged me.

The near instant attraction sets an off tone for the book and prevented natural development of the relationship.

Her scent surrounded him. Her body warmed his. Cradled in his arms she was soft and boneless against him. She wore a tissue-thin, copper-colored gypsy skirt that flowed silkily over her curves. Her heat burned him in ways he didn’t want to admit. His groin tightened, a purely male reaction to the sultry female held so close. He was breaking all the rules. He knew this, even as he set off for his SUV. He was breaking the rules, and risking the world and his very life for a hunch, and a mortal woman.

I liked that Megan was smart and capable of fighting back with whatever tools she had at her disposal and, at times, she read like the doctor and scientist she purported to be. But she fell into silly territory early on:

His long, calloused fingers grazed her cheeks as he released the gag. His touch sent shivers to her very core. No, Gideon Sinclair was no dream. He was a flesh and blood man, and he was all too real. She was crazy to be thinking of her kidnapper as some kind of sex god.

The second part of the story was much stronger, presenting more of the details of the worldbuilding and heightening the suspense. If you forego the initial moments of disbelief as to the relationship, the story can grow on you, but overall, I was hoping for something more. Both Keishon and Mrs. Giggles found this to be a fabulous read so I might be totally off base here. C+

This book can be purchased in ebook format from Samhain.