REVIEW: Hot on Her Heels by Susan Mallery 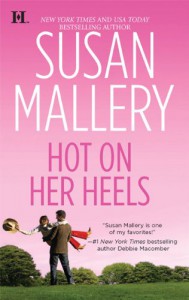 Having finished the entire Titan sisters series, I find myself in virtually the same place after the fourth book as after the first: I loved so much of the interaction among the women but found the basic suspense premise substantially problematic. Witty dialogue buoyed each book, while unconvincing characterizations torpedoed my ability to make the ultimate buy-in for each book. This last book, Hot on Her Heels, repeats the pattern faithfully, with Dana (an honorary Titan sister and oldest sister Lexi’s best friend for years) a witty, prickly, sassily amusing heroine and Titan half-brother Garth, her inevitable if not expectedly suited hero. With this book, we get the resolution to the power struggle between patriarch Jed Titan and his vengeful son Garth, as well as the Titan sisters’ campaign to bring Garth back from the dark side (i.e. war with the family). Can love redeem either or both of these difficult men?

First a bit of backstory. Unbenkownst to Jed Titan’s three daughters, before he married the first of his wives (Lexi’s mother), he got a local girl pregnant and ended up treating her very badly. When she did not accept his apology, the proud, rash Jed cut all ties to his son and his first love, going to far as to throw Garth out on the street when, at 14, he came to beg his father for enough money to treat his mother’s brain tumor. So now Garth is seeking his revenge on his father, and just for fun he decides to jerk with his half-sisters, as well. After all, they’re Titans, too, and have benefited from Jed’s wealth. And it’s not as if Jed is innocent, exactly; in fact, Jed’s sins are becoming more and more apparent to his daughters, and his behavior is becoming more and more hostile.

Although the older sisters had been slowly regaining control of the parts of their lives Garth messed with, in the last book, Straight from the Hip, wild child Izzy Titan was blinded in an explosion on the offshore rig where she worked as an underwater welder. Believing that Garth set the explosion, the sisters set Titanville police deputy Dana Birch on Garth, figuring that if anyone can get the truth out of Garth – who insists he had nothing to do with the explosion, despite his manipulations in getting Izzy to his best friend Nick’s facility for rehab – it’s the dogged, jaded, done with men, Deputy Dana. Not that Dana is resisting; in fact, she takes a leave of absence so she can tail Garth properly, even going so far as to let Garth know that she will be following him anywhere and everywhere he goes. A notion to which Garth seems unexpectedly receptive.

Because this is a Romance novel, in case we might forget, and the two remaining eligible single folks must be paired off by the end. And what is more canonical than the handsome, wealthy, committed to being single bachelor who can have any woman he wants wanting the boyish, no make-up wearing, defensive, only dates weak men woman? And in that respect, Hot on Her Heels is very traditional. There is a bit of a twist with Garth, who was held captive and tortured in a South American jungle, as well as with Dana, who was the teenaged victim of an abusive father. But for the most part, these serious issues serve as obligatory obstacles to emotional vulnerability and commitment for the two.

Now for the good, most of which happens around the smart-alecky sisters and their campaign to make Garth a true and loyal Titan sibling:

…"Come on. Join the party. As I said the other day, you’re family. This path of destruction you’re on is just plain stupid. So we’re going to save you."

"If necessary." She smiled. "We can be very persuasive."

"Izzy wants you to join the family," Skye said.

He remembered her saying something like that before. "Thanks, but no."

"Part of saving me against my will?"

"Uh-huh. Come on, Garth. We’re your sisters. Didn’t you ever wish you had someone to braid your hair?"

Scenes like this constituted the most enjoyable passages in the novel for me; the exchanges were sharp and well-written, the humor not overdone or tired. I was even willing to go along with the idea that the sisters would be so forgiving of Garth (something that becomes a bit more believable as Jed treats them more and more badly).

Unfortunately, the strong, well-portrayed bonds among the sisters and Dana were not well-matched by the development of the romantic relationship between Dana and Garth.

Which brings me to the bad.

By the end of Skye’s book, Lip Service, Dana was so motivated to bring Garth to justice for his attacks on the sisters that she was voluntarily breaking with her duty as a cop and engaging in some seriously unlawful behavior. That move was about as believable as the ease with which the sisters have decided to "love Garth into submission,’ but I was willing to suspend some disbelief because Dana’s loyalty to the sisters is so strong. That is, I was given enough of a basis in the existing relationships to accommodate this rather unexpected shift in Dana’s character.

Garth’s necessary rehabilitation into romantic hero material manifests in a form that is not unexpected but is also awkward, as the attention in Hot on Her Heels shifts away from his bad deeds to someone who is even more of a threat to the women. In relatively short order, Garth is able to shift positions from threatening outsider to trusted ally and long-lost brother, a transition that has been anticipated since the last book, but which is still hastily accomplished and involves the problematic sacrifice of another character.

Further, with Garth and Dana’s relationship, there is really not much foundation established for their budding attraction and romance (after all, Garth has been the guy going after Dana’s best friends in the whole world and her honorary sisters). And yet, Garth is already falling under the spell of Dana’s sensuous mouth by Chapter 2 of Hot on Her Heels, hastily confessing to her that "Your mouth drives me crazy," kissing her senseless and giving her the magic orgasm of HEA bonding, all in about a hundred pages. By the time Garth proposes she move in with him so he can protect her from "the real threat," conventional romantic formula is firmly entrenched as the main motivator of this couple’s relationship:

He turned to face her. "I thought you’d be more comfortable here. I didn’t want to assume…"

It was the first time she’d seen him unsure of himself. He didn’t look directly at her as he spoke and after gesturing to the bed, he shoved his hands into his slacks pockets.

A guest room. Who would have thought?

She thought of the big bed in the room down the hall, of sleeping next to him every night, of having him touch her and take her until she was weak with wanting to give all she had. And if she did that, what would be left of her?

"This would be great," she said.

Something flashed through his eyes. Something that if she’d been brave like Izzy or beautiful like Lexi or emotionally strong like Skye she might have thought was disappointment, but being just her, she ignored it.

Garth and Dana spend a lot of time and narrative space questioning and ignoring the looks in each other’s eyes, the intention behind each touch, the emotion behind every smile and frown. Garth finds himself wanting Dana with properly intense and momentous desire, even though he’s convinced he will never fall in Love. Dana finds herself wearing mascara and high heels, questioning herself but enjoying the feeling of being a girl, prickly as a matter of form but clearly falling for the handsome, wealthy, I survived torture in a South American jungle Garth. There was so little here that was new or challenging that it communicated to me as trite, even annoying at times, especially all those moments of "does she or doesn’t she?,’ "does he or doesn’t he?’ Within a few chapters, it is obvious that these two are not only meant for each other, but that every aspect of their characters heretofore, every reason they have to distrust one another, to be truly suspicious of each other, and to follow the logic of Garth’s far-reaching revenge plot against the Titans, is swept away in the throes of their mutual passion.

And that is really the ugly of Hot on Her Heels. Garth’s systematic campaign against the Titans, which at least had some real justification behind it, is easily forgotten, at which point Garth really becomes the true Titan patriarch. Because we’ve known since the first book, Under Her Skin, that Jed was being set up as the true villain of the series, an egomaniacal nut who viewed his daughters as either pawns or whores (or both). This transfer of sympathy created two insupportable scenarios for me: either Jed had always been that way, in which case I could not imagine how his daughters were not neurotic messes, or he suddenly became that way, which I felt should have prompted something akin to a 5150 mental health hold as opposed to a Titan-sister counter-attack. Since neither option was explored in the series, by the time the sisters engineer their family reunion with Garth and join forces against their father, I had pretty much lost faith in the vehicle that drove the series arc. And with that it was difficult to see Garth and Dana’s relationship as anything more than a by-the-numbers coupling of romantic series convenience. Garth needs to be a "true Titan brother" and Dana needs to be a "true Titan sister," so what better way to accomplish that than to make Garth a hero and match him up with Dana?

The last Titan sisters book I reviewed, Straight from the Hip (Skye and Mitch’s story), actually rose in evaluation once I started composing my review. Hot on Her Heels, by contrast, read much more generously than it reviewed. Once I really started reflecting on what worked for me against what didn’t, one column clearly dominated. And it was a disappointment, because the sisters and Dana had so much potential and so much fun in their portrayal. But the clichés became more and more wearing, such that what should have been the most challenging (and, it follows, the most satisfying) relationship in the series to develop – that between the vengeful bastard son and the avenger of justice and friendship – felt the most trite. C-