I fear I’m growing weary of paranormal YA, in much the same way I did for urban fantasy a few years back. I’m still willing to give the subgenre a try because sometimes all it takes is one book to make you fall in love again, but it’s going to take much more to impress me these days. I wish I could say Haven was that book, but it wasn’t. 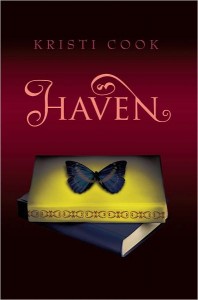 When Violet McKenna leaves Atlanta to join her stepmother in New York, she has the rare opportunity to start over. In her old town, she was known as the freak — the girl who has seizures and who sometimes knows when people are going to die. Violet hopes to leave that behind her when she enrolls at Winterhaven, a New York boarding school. But things never go that easy; it turns out Winterhaven’s student body is composed entirely of people with supernatural abilities. So much for leaving the past behind.

Despite the unexpected turn of events, Violet settles in, makes new friends, and finds her niche. After all, when you’re in a school full of people with psychic abilities, it’s tough to be labeled a freak if you look otherwise normal. Then she meets Aidan Gray, the hottest and most wanted guy at school. Of course she does. What happens next will shock anyone who’s ever read a paranormal YA (or not): Aidan reciprocates because how could he possibly resist the new girl?

But as Violet grows closer to her new boyfriend, she becomes increasingly plagued by nightmarish visions. She realizes he’s been keeping a secret, not only from her but from their classmates. Even more importantly, his secret affects Violet because it shows that their destinies are intertwined. Just not as lovers.

A couple months ago, Jane reviewed Ascension, which was a mash-up of various paranormal romance tropes. For me, Haven is the paranormal YA equivalent. There is absolutely nothing new or original in this book. It has the boarding school setting like the Claudia Gray series. It has students with supernatural abilities like X-Men. It has a hot guy falling for the new girl like Twilight. It even has shades of Buffy the Vampire Slayer running throughout the second half of the book.

Now, lack of originality doesn’t automatically equate to badness or even lack of enjoyment in spite of badness. Books can always put a new spin to things. There just wasn’t enough of it in Haven for me.

I also found Aidan’s “secret” obvious. I knew from his first appearance on-page what he was so the drawn-out “suspense” of Violet trying to find out was annoying. It made me think she was slow on the uptake and speaking for myself, I like my female protagonists to be sharp and not made out to look stupid. That said, I will be the first to admit I’m a tough sell on stories in which the protagonist figures something out much later than the reader. The discrepancy in realization here could have been deliberate. On the other hand, it also could have been that I’ve read many paranormal YA books so the plotline was phoned it from page 1.

When Violet settled in at Winterhaven, I was initially excited to see her make new friends. I was hoping we’d get a book where female friendship would take more of an active role in the narrative. Unfortunately, this was not meant to be. Once Aidan enters the picture, it’s all Aidan all the time. Too bad because I found Aidan one of the most boring love interests to ever grace the pages of a young adult novel.

In fact, it’s the focus on Violet’s relationship with Aidan and it’s on-again, off-again nature that made the middle stretch of the book such a slog. “He loves me! He does not love me! He wants to be with me! He doesn’t want to be with me!” Enough already. I know this is emblematic of teenage love and relationships, but we already know they’ll overcome adversity and end up together at the end of the book. The disconnect is partly my fault though, because I like boarding school stories and the “schools full of supernaturals” trope, so I was hoping for something other than yet another Twilight-redux.

Due to its mash-up nature, I think many readers will like Haven. It’s tailored for a certain audience, and I think Twilight fans looking for something similar will at least want to give it a try. Readers wanting something new and different, however, will probably want to give this one a pass. Still, I do have to give bonus points for the reason behind why Violet resembles a certain girl from Aidan’s past. That little detail was creepily cool. If only the rest of the book could have followed suit; then I might have enjoyed reading it more. C-

→ Jia
Previous article: Open Thread for Readers for May 2011
Next Post: Monday Midday Links: Beverly Barton has passed away.