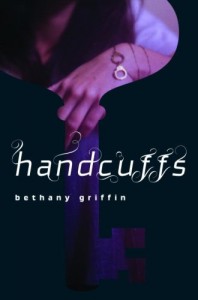 I’m always up for reading more young adult novels.   In fact, reviewing more YA novels is one of my more nefarious goals for Dear Author.   But your debut reminded me why “problem” YA novels often don’t work for me.

Parker Prescott is an ice princess, both self-identified and labelled by friends and family.   After all, it’s better to be an ice princess than it is to be pathologically shy.   Ice princess means choice is involved.   Shyness implies a character flaw.   When you’re a teenager seeking acceptance, one is definitely preferable over the other.

Parker has the usual teen problems.   A family that doesn’t understand her.   An older sister who’s the beloved golden child who can do no wrong.   A younger brother who’s the cherished miracle baby.   A hot ex-boyfriend she’s still in love with.   A cool best friend she wishes she were more like.   An enemy determined to ruin her reputation as revenge for a past wrong.   A rival for her ex-boyfriend’s affections.   I think that’s my main problem with the book.   It has all the pieces we expect to find in a “problem” YA but they don’t immediately come together in a way that’s coherent or logical, let alone present them in a fresh, original fashion.

I found the first half of the book to be disjointed and episodic.   Some readers don’t mind episodic books but this went beyond that for me because I often couldn’t figure out what the point of many scenes were.   The story became clearer in the second half when the truth about Parker’s older sister, her stalker, and how they both impacted the present come to light.   I can’t help but wonder if I would have liked the book more if these things were given more importance in the first half.   Subtle hinting and foreshadowing is one thing, but the second half almost read like it came from a different novel.

The handcuffs of the title refer an incident in which Parker’s parents catch Parker handcuffed to a chair in her father’s office by her ex-boyfriend as part of a sexual game.   But given the title and its focus in the book’s blurb, I expected the scene to have more importance than it did.   As it was, it felt almost gimmicky.   I realize cover blurbs can be very deceptive, but even the second time handcuffs came up in the narrative felt gimmicky.   Perhaps I wouldn’t think this way if the storyline culminating in the second handcuffs incident had carried more weight than it did.   But again, it read like an afterthought than a major part of the novel.

The uncertainty in Parker’s relationship with her nameless ex-boyfriend (we never did learn his name, did we?), while true to life, didn’t exactly make for the most gripping read.   When writers say real life doesn’t always translate to interesting fiction, I guess this is what they meant.   Truthfully, I started getting very annoyed with it and once I reached the end, my reaction was that’s it?   I don’t even want to go into Parker’s sister and her romantic problems, if you could even call them “romantic.”   Suffice it to say, I was a little creeped out by the end.

I realize I sound like I’m coming down on problem novels, but that’s not the case.   I like a well-written problem novel.   My issue with Handcuffs is that it skims many different teen problems without delving deep in any of them.   Sex, being true to yourself, popularity, perceived reputations, bullying, alcoholism, domestic abuse, date rape, stalking, and family relationships are the ones that come immediately to mind.   I could easily be missing some more.   That’s a lot for one novel.   I’d venture to say that’s probably just too much. C-

This book can be purchased in hardcover from Amazon or ebook format from Sony Store.